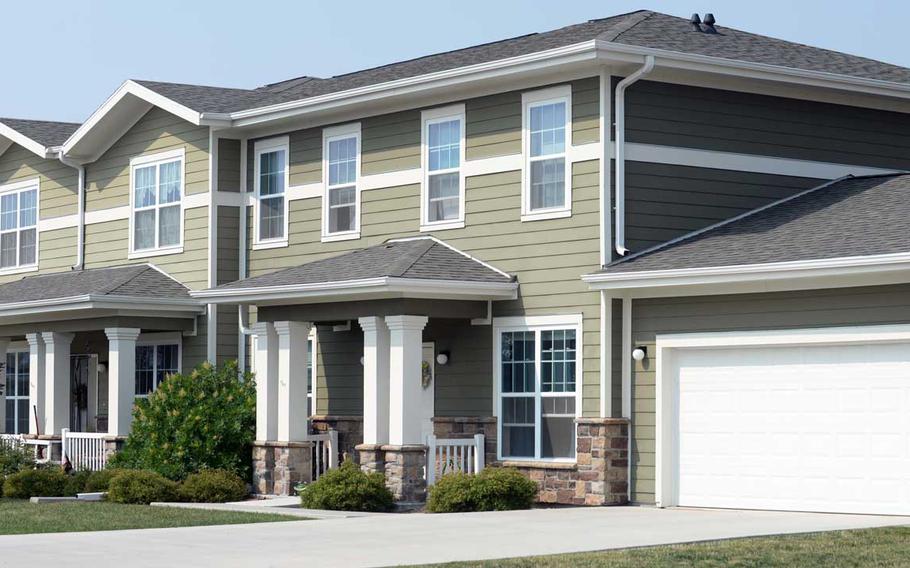 A home in the Black Hills Estates housing area is photographed at Ellsworth Air Force Base, S.D., Aug. 24, 2020. Most families living in military housing will be protected by all 18 tenant rights by June, a defense official said Tuesday. (Quentin K. Marx/U.S. Air Force)

WASHINGTON — Most families living in military housing will be protected by all 18 tenant rights by June, a defense official said Tuesday.

“This represents a fundamental step in our ongoing effort to improve the department's military housing program,” Paul Cramer, the principal deputy assistant secretary of defense for sustainment (installations), said during a hearing of the House Appropriations Committee’s subpanel on military construction.

Lawmakers included several reforms in the 2020 National Defense Authorization Act, including a tenant bill of rights for base housing residents that guarantees 18 specific entitlements related to the quality of housing, how to handle disputes with the landlord, a better understanding of leases, and the maintenance history of a residence.

All but four of the tenant rights have been implemented so far. The remaining four are the right to withhold rent until disputes are resolved, a clearly defined dispute resolution process, seven years of maintenance history records and a standard lease.

When a company has contracted for a new housing project or is renewing their management agreement, they must accept all 18 tenant rights and the policies associated with them as part of the agreement. However, the government cannot force the private companies to adopt the remaining tenant rights for existing housing agreements, so the Defense Department is asking the 14 companies to voluntarily agree to them, according to Cramer.

All but three companies have verbally agreed to have the additional rights available to tenants by June 1, according to Cramer. These rights will be available “at the vast majority of installations” with housing managed by private companies, he said. The rights will be included in landlord-tenant leases that military personnel sign, Cramer said.

Pete Hughes, a Pentagon spokesman, said Tuesday that the remaining rights will apply to current residents and new tenants.

Cramer did not name the three companies that have not agreed to the added rights but he said he believed they would eventually agree. Hughes would not release the company names, saying it could be “detrimental” to Defense Department efforts to get these companies to agree voluntarily to the remaining tenant rights if they are revealed.

If the housing companies do not comply with the tenant rights, the government has recourse through the existing operating agreement, Cramer said. He did not say what that recourse is.

Cramer also said he was signing an updated policy for the right to seven years of maintenance records due to a change in the fiscal year 2021 NDAA.