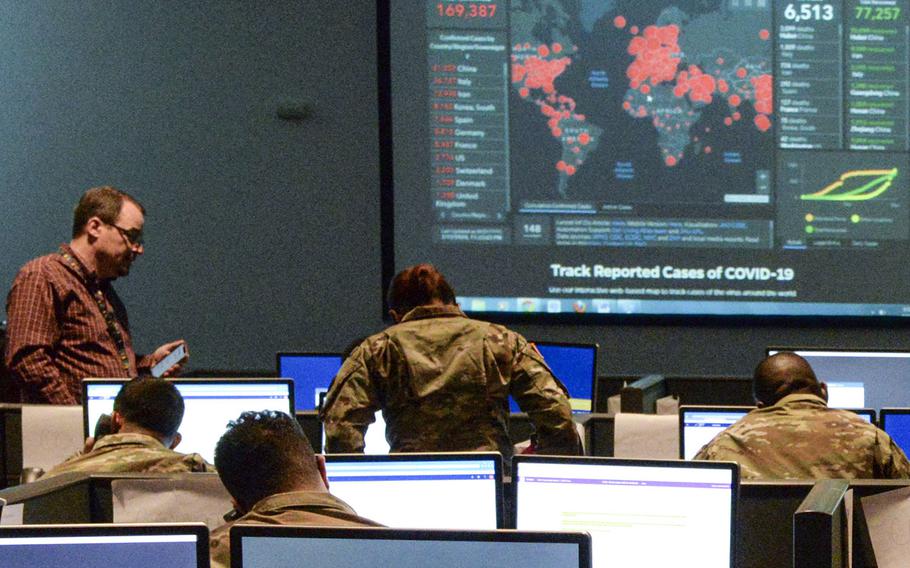 Governors in 22 states are activating their National Guards to help manage the growing number of coronavirus infections and demands for testing and medical supplies as more than 5,700 positive cases of the illness have been reported in the United States.

More than 1,700 troops have been activated now, according to information from the National Guard Bureau in Washington and the state Guards.

In Arkansas, the National Guard mobilized 20 medics from the 39th Infantry Brigade Combat Team to operate phone lines with Arkansas Department of Health.

About 50 Colorado National Guard members were activated to assist local and state agencies with medical support and logistics at drive-up coronavirus testing centers in various communities throughout the state, Elena O'Bryan, spokeswoman for the state government.

“Most of these National Guard warriors are the state's resident trained and equipped experts in biological hazards,” she said. “They are assisting with testing and testing support and advising Colorado local and state partners with validated tactics, techniques and procedures for future screening missions in Colorado.”

Texas and New Jersey activated their Guards within the past 24 hours. The New Jersey National Guard is preparing for 150 soldiers and airmen to be prescreened for duty to support logistics, transportation, traffic control, security and engineering needs throughout the state, said Lt. Col. Barbara Brown, spokeswoman for the state National Guard.

Texas Gov. Greg Abbott, speaking to the media Tuesday, did not identify when he will call the troops up, but he said they are preparing to deploy.

“The National Guard has been involved in this process from the beginning. It’s just that at this particular point, I want to fully activate the National Guard, but no National Guard need to be deployed at this time.” Abbott said. “We do want to exempt from anybody who may be called up first responders or anybody involved in the health care profession because they need to be on the front lines making sure that we are providing all the health care that is needed for those who may contract [coronavirus].”

More than 50 Pennsylvania National Guard members were activated to help the state receive 38 passengers from a Grand Princess cruise ship who returned to the state Tuesday after being quarantined at Dobbins Air Reserve Base, Ga.

The group was flown to the Harrisburg International Airport in Middletown and individually driven by Guard troops to their homes throughout the state, according to a release from the National Guard Bureau.

"One of the most important National Guard missions is to support our own communities," said Maj. Gen. Anthony Carrelli, adjutant general of Pennsylvania. "Assisting and serving our fellow neighbors is a very personal effort as this is where we live. We are all in this together."