More money for training, maintenance in DOD budget for Marines after year of crashes 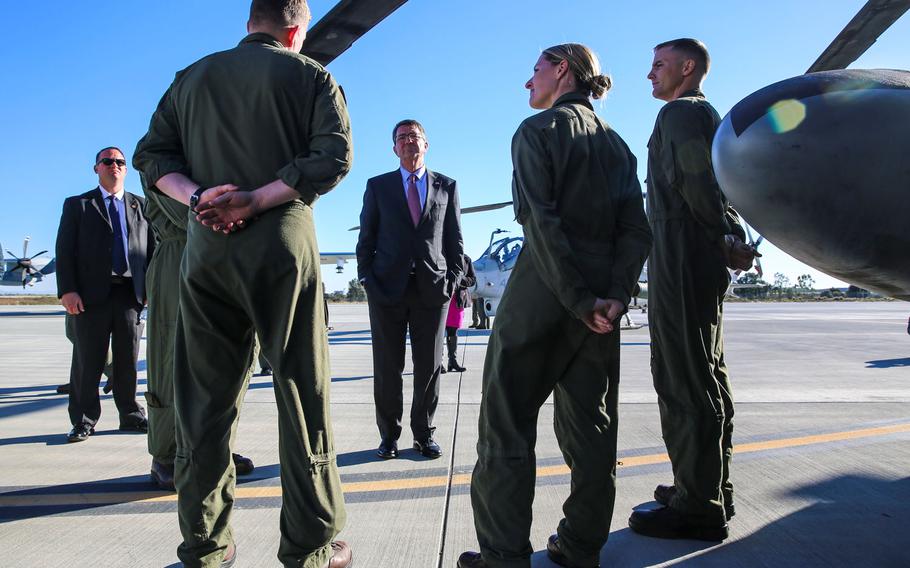 The spending request comes after a year when dozens of aviators died during flight training missions at their home stations.

Carter made the announcement to about 125 maintainers and support personnel in a hangar at Marine Corps Air Station Miramar during a three-day West Coast trip to visit bases in California and Arizona that would gain new weapons, ships or funding from next year's budget request.

Miramar is also home to the 3rd Marine Aircraft Wing, which lost Capt. Elizabeth Kealey, 32, and 1st Lt. Adam Satterfield, 25, in January 2015 when the UH-1Y Venom helicopter that they were aboard crashed during training. It was one of the first in a string of training crashes during the last 12 months, the most recent involving a pair of Marine Corps CH-53 Super Stallions that collided off of Oahu, Hawaii last month, killing 12.

Defense experts have questioned whether the increase in crashes is tied to budget cuts in home station training and maintenance and the focus of funds on training for deploying forces.

Drawing attention to the need to increase training and maintenance is a "big part" of why Gen. Robert Neller, the Marine Corps commandant, thought this base "would be an excellent place for me to come," Carter said Wednesday.

Carter would not disclose funding amounts, which will be part of the 2017 budget request that the Pentagon will submit to Congress next week.

"There are two ways to address readiness. One is to increase the dollars that go to training itself. Another is to increase the maintenance of existing airframes," Carter said. "In both of those cases we are adding funding in the FY17 budget."

He also said the budget will include extra funds "specifically to make up some maintenance shortfalls and delays in the past that will be important to folks here.”

"It's a big theme of this budget for the Marine Corps," Carter said, "It's one of Gen. Neller's top priorities and I completely concur with him in that regard. For the Marines, readiness is their stock and trade."