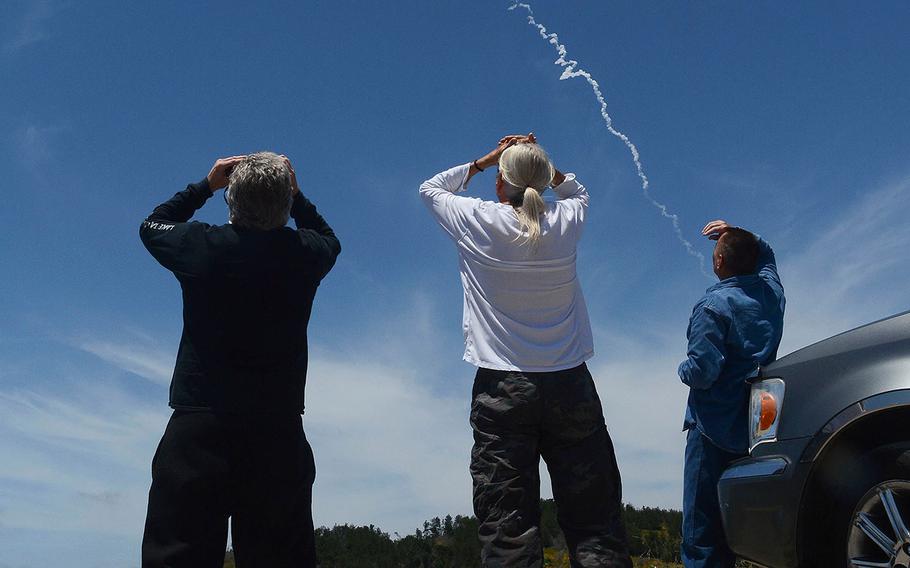 Spectators watch an interceptor missile launch from an underground silo at Vandenberg Air Force Base in California and fly toward an intercontinental-range missile fired from a test range on Kwajalein Atoll in the Pacific. (Len Wood /The Santa Maria Times via AP)

Initial evaluations of the long-planned test conducted from Vandenberg Air Force Base in California show its primary anti-ballistic missile system “performed as designed” against an ICBM-category threat, Navy Vice Adm. Jim Syring, director of the U.S. Missile Defense Agency, said Wednesday. He described the test of the Ground-Based Midcourse Defense as realistic and based on an actual threat the United States could face from foes like North Korea or Iran in the next three years, according to intelligence assessments.

“The interceptor that we flew yesterday certainly keeps pace with, and I would say helps us outpace, the threat through 2020,” Syring told reporters at the Pentagon on Wednesday. “I was confident before the test that we have the capability to defeat any threat that they would throw at us. I am even more confident today -- after seeing the intercept test yesterday -- that we continue to be on that course.”

Analysts will spend about a month poring through data collected during the $244 million test, Syring said. They will determine down to the centimeter how accurate the interceptor was in an effort to continue improving the GMD system, which has faced past challenges.

The system was last tested in June 2014 when it successfully destroyed a target resembling an intermediate-range ballistic missile. That was the first successful intercept test in the previous four tries, with two tests failing in 2010 another failing in 2013. The system has now been successful in 10 of 18 tests.

The United States is primarily concerned about the threat from the increasingly belligerent North Korea. Since January, the reclusive nation has conducted at least eight missile launch attempts, including firing ballistic missiles the last three weekends. North Korea has vowed to develop an ICBM capable of carrying a nuclear warhead and striking the U.S. mainland.

In the test Tuesday, an ICBM-like target was launched from the Reagan Test Site on Kwajalein Atoll in the Marshall Islands, according to an MDA statement. Sensors in the Pacific Ocean and in the United States tracked the target, and a ground-based interceptor missile was launched.

A 5-foot-long “kill vehicle” was then released from the interceptor, which struck and destroyed the target in space over the Pacific Ocean thousands of miles off the U.S. western coast, Syring said. The kill vehicle does not contain any explosives and is designed to destroy ballistic missiles outside Earth’s atmosphere using only the force of its impact.

MDA will next test the Ground-Based Midcourse Defense around August or September 2018, when it plans to fire two interceptors at a single ICBM-like target, Syring said. By that time, the system, which includes 36 interceptors at Vandenberg and Fort Greely in Alaska, will be complete with 44 interceptors buried in the ground at those bases.