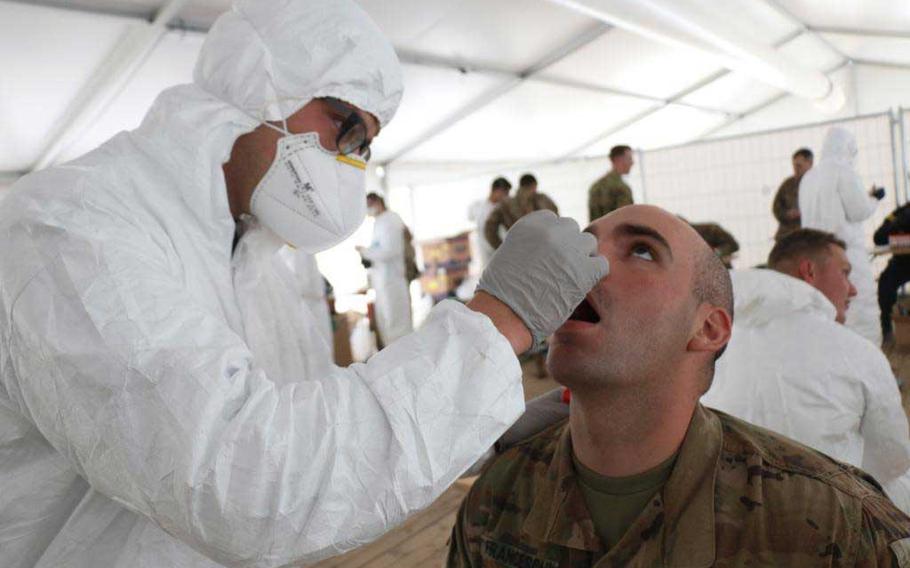 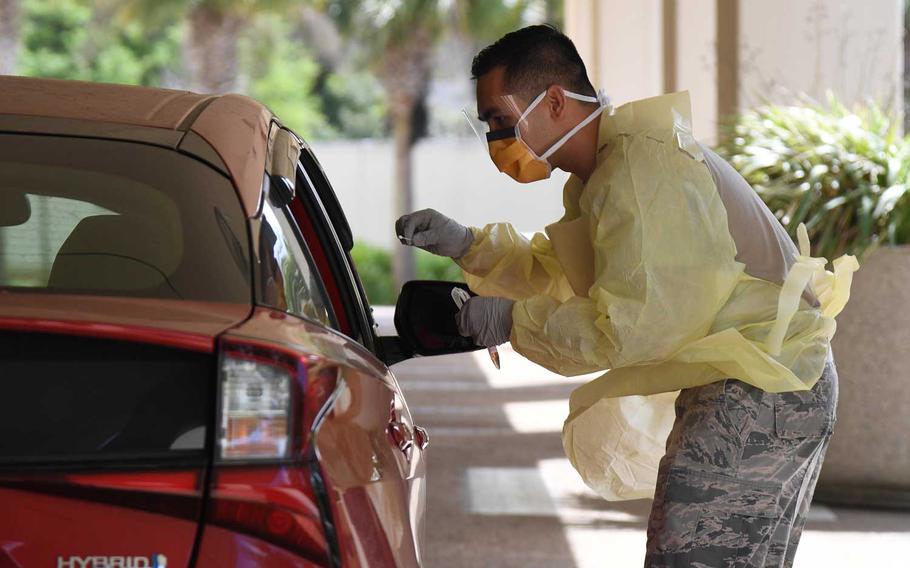 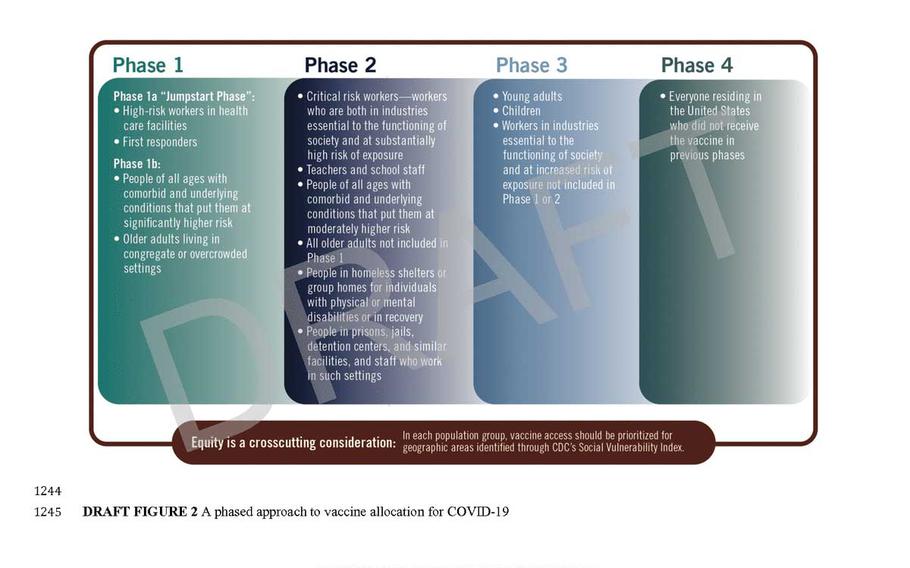 WASHINGTON — Service members might not be at the front of the line to receive the coronavirus vaccine when it is ready, unless they are health care workers or at high risk of contracting the disease, according to a document outlining the possible order of distribution.

A four-phased approach for distributing a coronavirus vaccine in the United States has been recommended by the Committee on Equitable Allocation of Vaccine for the Novel Coronavirus and the approach was laid out in “Discussion Draft of the Preliminary Framework for Equitable Allocation of COVID-19 Vaccine,” which was published Tuesday by the National Academies of Sciences, Engineering, Medicine.

According to the preliminary framework, which is open for public comment until Friday, the military was not set aside as an individual population group to be prioritized in any of the four phases of distribution for a vaccine. Instead, the document states “in the absence of a separate allotment of [coronavirus] vaccine to the U.S. military,” the committee recommended personnel would receive the vaccine using the same priority criteria as civilians.

The National Academies of Sciences, Engineering, Medicine provides independent policy advice, including ad hoc committees such as the one that wrote this vaccine distribution draft at the request of the Centers for Disease Control and Prevention and the National Institutes of Health.

The Pentagon did not respond Wednesday to a request for comment about the document.

The four phases are organized into population groups, with those who are the highest risk of contracting the virus or becoming severely sick receiving the vaccine first. Then workers in daily support industries, such as mail carriers, bus drivers and teachers, would be next, as well as those in homeless shelters and prisons. The third group would be children, young adults, and workers in industries such as restaurants and hotels. And finally, everyone else who do not fall into the criteria for the other three phases would then get the vaccine.

For each population group, the vaccine would also be prioritized geographically through the Centers for Disease Control and Prevention Vulnerability Index, according to the report.

Yet, Pentagon officials have repeatedly said service members are less likely to be severely affected by the virus. The military now has about 1.2 million active-duty service members and 781,000 reservists, according to the report.

“We have a young, healthy, fit, robust demographic in the United States military,” Defense Secretary Mark Esper said in March.

As of Wednesday, the military has had 38,424 cases of the coronavirus and seven service members have died. About 575 people have been hospitalized and 23,011 have recovered, according to Pentagon data.

Throughout the United States, there have had more than 6.1 million cases of the coronavirus and more than 185,000 deaths as of Wednesday, according to Johns Hopkins University, the highest numbers of any country affected by the pandemic.

Operation Warp Speed is the public-private effort led by the government to rapidly develop and distribute a vaccine for the coronavirus. The Defense Department is a participant in the effort and one of its key responsibilities would be supporting a quicker distribution of the vaccine across the country.

The goal of Operation Warp Speed is to have 300 million doses of a vaccine developed and delivered by January 2021, according to the Defense Department. But the details for how the vaccine will be distributed and given to people has not been fully determined yet, according to the draft document.

Despite the goal to have doses available for everyone in the United States by early next year, the committee was established in July to look at how the vaccine would be distributed with a small initial supply, according to the report.

The committee researched and designed a way for distributing the vaccine fairly by examining other frameworks for medical care during the coronavirus pandemic and past priorities for vaccines, including the 2009 H1N1 influenza A pandemic and the Ebola epidemic in West Africa between 2013 to 2016.

Phase One populations are high-risk workers in health care facilities and those whose underlying health puts them at “significantly” higher risk from the virus, according to the document. Service members who work in health care facilities or who have underlying conditions that would put them at significant risk would potentially be in this first phase.

Phase Three also would cover a large portion of the military as it includes all “young adults” or people who are between 18 to 30 years old. Even though people in this age range are less likely to die or be hospitalized by the virus, more evidence is showing that they might disproportionally be spreading the virus more, according to the report. It also cites studies that adults younger than 30 have larger social networks than other adult-age groups, making them more at risk to exposure and spreading the virus.

They are also more likely to live in communal settings, and this would also apply to the barracks and dorms for service members on military installations.

The military has had outbreaks among its personnel including on ships where sailors are put in confined work and living conditions. The outbreak of the virus aboard the USS Theodore Roosevelt in March infected more than 1,150 sailors. One sailor died.

The public comments submitted this week will be considered in the final framework and report that is expected to be released in the early fall, according to the National Academies website.