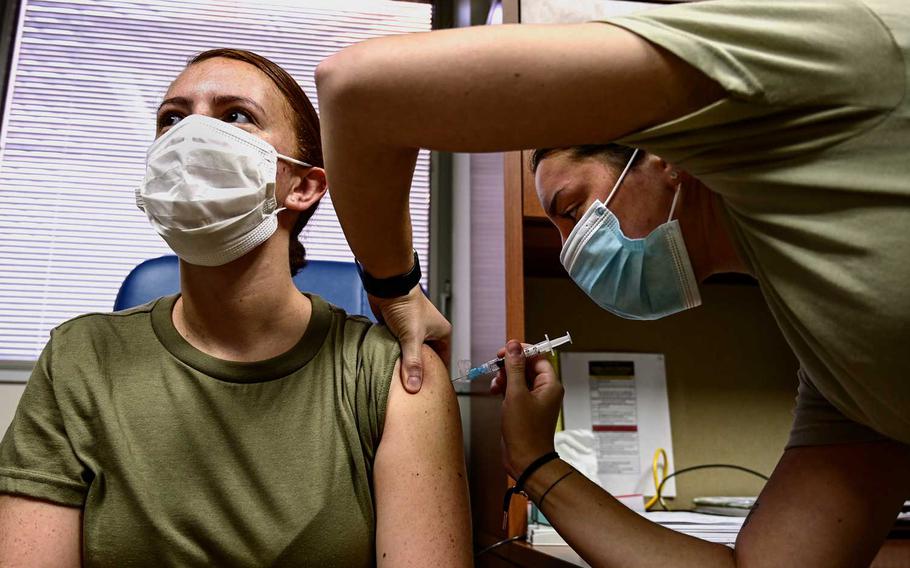 Senior Airman Ava Di Benedetto administers an influenza vaccination to an airman at the Pittsburgh International Airport Air Reserve Station, Pennsylvania. Military health care workers and then first responders will be the first to be vaccinated by the Defense Department when the coronavirus vaccines are approved, according to the Navy’s top officer. (Joshua J. Seybert/Air Force)

WASHINGTON — Military health care workers and then first responders will be the first to be vaccinated by the Defense Department when the coronavirus vaccines are approved, according to the Navy’s top officer.

“And if there’s anything we’re really good at, it’s mass immunization in the U.S. military,” Adm. Mike Gilday, the chief of naval operations, said Wednesday when asked about the coronavirus vaccination process before the Senate Armed Services Committee’s subpanel on readiness and management support.

On Tuesday, the Centers for Disease Control and Prevention’s Advisory Committee on Immunization Practices recommended health care workers and people living in long-term care facilities should be the first in the United States to receive the two pending coronavirus vaccines.

While the Food and Drug Administration continues to work on approving the emergency use authorization for the Pfizer and Moderna coronavirus vaccines, the federal government has begun contacting local governments and some agencies about what they can expect.

Sixty-four jurisdictions, which includes all 50 states, eight American territories, six major cities, as well as five federal agencies, have been told how much of each vaccine they will be allocated within 24 hours of the authorization’s approval, said Army Gen. Gustave Perna, the commander of U.S. Army Materiel Command and the chief operations officer for Operation Warp Speed, the government’s effort to develop and distribute a vaccine for the coronavirus, as well as supply testing and equipment throughout the United States.

The Defense Department is one of the five agencies to be allocated its own supply of the vaccines, along with the Department of Veterans Affairs, the State Department, the Indian Health Service and the Bureau of Prisons.

While the Pentagon has not released its plan of how the department will distribute and prioritize the vaccine among its personnel, Gilday offered a glimpse of the process during Wednesday’s Senate hearing. According to Gilday, the Defense Department’s vaccines are being sent to every military medical treatment facility within the United States as well as locations overseas.

The same people who are given priority for testing will also be prioritized for the vaccines, according to Gilday. The first personnel to receive it will be health care professionals and then emergency and safety personnel at installations. This could potentially cover not just service members but also civilians and contractors who are part of the Defense Department, according to the CDC.

“Those people are likely to come in contact with people that are infected,” he said.

Next will be strategic forces, such as sailors on strategic missile submarines, and then service members who will be deploying within the next three months, Gilday said.

“Once we get the vaccine distributed, the vaccination piece — now that we have the prioritization well thought out — will happen pretty quickly,” he said.