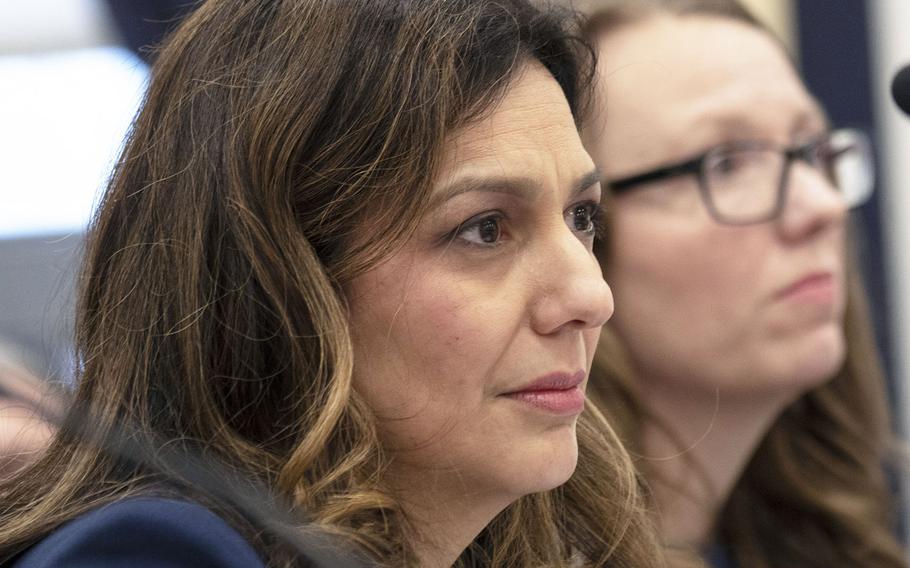 Buy Photo
Michelle Norman, at a House Armed Services subcommittee meeting on the Exceptional Family Member Program, Feb. 5, 2020 on Capitol Hill. Next to her is military spouse Austin Carrigg. (Joe Gromelski/Stars and Stripes)

Norman and her husband, Navy Capt. Cassidy Norman, have spent about six years and $220,000 in legal battle against the Virginia Beach School District — first to get their disabled daughter into private school, and now to keep her there.

Marisa Norman, 16, has 21 diagnosed disabilities, including cerebral palsy, partial paralysis and neurodevelopmental and neurological disorders. She regressed after attending fifth grade in Virginia Beach public school but has flourished in private school. Because of a federal law that requires schools to provide every child a free and appropriate public education, the Virginia Beach School District is paying her private-school tuition. The district is now arguing that it can provide Marisa with a good public education, but the Normans disagree.

Michelle Norman has heard from dozens of military families struggling through the same problems but lacking the resources to fight their school districts. She organized the families into a movement, drafted legislation and brought the issue — and possible solutions — to Capitol Hill.

On Wednesday, she presented their ideas to members of the House Armed Services Committee.

“Providing opportunities for Marisa, including those required by federal law, has taken an incredible toll on us, both financially and emotionally,” Norman told the committee’s subpanel on military personnel. “If after spending over $220,000 in legal expenses out of our own pockets and winning all legal decisions, the school district with deep pockets of taxpayer money continues to violate the law with impunity and without penalty, how can an enlisted servicemember even begin to fight?”

Norman and other military spouses, including Grace Kim — a special education attorney — drafted the Promise Act, which would require the military to offer legal help for families in similar situations as the Normans. It also aims to increase transparency about how school districts spend money on legal battles with military families.

The draft bill has sparked interest among the Military Families Caucus, led by Reps. Cathy McMorris Rodgers, R-Wash., and Sanford Bishop, D-Ga. Norman said they’re hoping to include the measure in the National Defense Authorization Act for fiscal year 2021.

Norman and her team of advocates succeeded in getting language into the 2020 NDAA that addresses the issue. With the help of Rep. Elaine Luria, D-Va., a measure was approved that requires the Defense Department to study the extent of the problem.

The purpose of Wednesday’s subpanel hearing was to discuss wide-ranging problems with the military’s Exceptional Family Member Program, which was established to manage medical care, treatment programs and education for military family members with special needs. About 135,000 people are enrolled in the program.

Multiple witnesses, including Norman, described the program as failing. There’s a lack of communication and advocacy from the program on families’ behalf, they said.

“We are going to fix this this year,” said Rep. Jackie Speier, D-Calif., chairwoman of the subpanel on military personnel. “We’ve got to address it. It’s going to take resources, but there are lots of ways we can provide those resources and take them from other, less significant needs in the federal government. That’s my commitment.”

Norman testified to the subpanel Wednesday against a backdrop of the dozens of concerned military families. There were more in the room next door, where the audience gathered after the first hearing space overflowed.

“It was so electric and energized in that room,” Norman said. “Those who needed to have their cup refilled to keep advocating – that was the recipe right there.”

One of those family members was Shannon DeBlock, wife of Navy Cmdr. Jason DeBlock.

A few years ago, the DeBlocks were transferred from Annapolis, Md., to San Diego, where they fought with the school district for two years over the education of their son Wesley, 11, who has autism.

“They put up every single barrier they could think of to not educate him,” she said.

The legal battle ended in mediation, during which the DeBlocks agreed to move back to Annapolis, where they knew Wesley could receive an appropriate, special-needs education. While Shannon and their two sons live in Maryland, Jason DeBlock is stationed in Norfolk, Va., commanding the USS Truxton.

Though Wesley is now getting a good education, the move to San Diego had lasting effects. He went two years with little schooling, and his reading regressed from a second-grade level to that of a kindergartner.

“We chose to separate our family to avoid the conflict of a legal battle that appeared to be never-ending,” Shannon DeBlock said. “We rely on these school districts and educators to help our kids become independent as much as they can be, and to be contributing members of society. When schools do this, the impact is so huge. It could affect the rest of their lives.”

Jason DeBlock’s lifelong dream was to be in the Navy, Shannon said. However, because of the education issues and their separation, they’re wondering whether they can continue to commit to military life.

Norman said the issue of military retention was one that hit home to lawmakers Wednesday.

“When you have EMFP issues, it significantly degrades military retention and readiness,” Norman said. “When you have soldiers and sailors who are worried and distracted about how their families are being taken care of back home, obviously that’s going to have a big effect on their state of mind and performance.”

Norman is optimistic about what’s next. She’s hosting a congressional briefing about the issue later this month, and Speier vowed to reconvene her subpanel in a few months to track the Defense Department’s progress.

“It was so empowering to us to finally feel like our voices were being heard,” Norman said. “Now, we need to see some action.”