Military compensation report out by Feb. 1 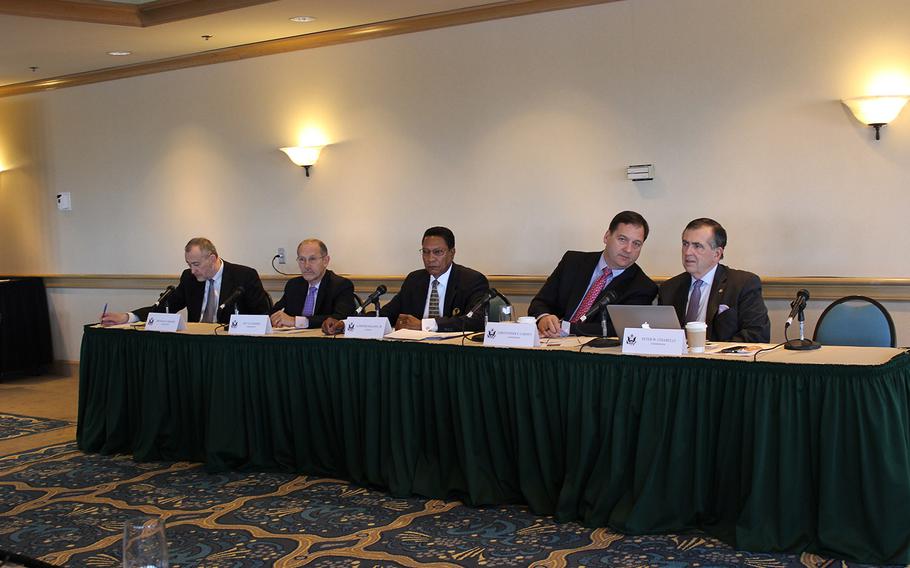 Members of the Military Compensation and Retirement Modernization Commission, from left, Michael Higgins, Dov Zakheim, Alphonso Maldon Jr., Christopher Carney, Peter Chiarelli, listen as San Diego military leaders answer questions about pay and benefits in March 2014 at the Hilton San Diego Airport-Harbor Island. The commission is charged with evaluating the military compensation and benefits system and making recommendations about how best to update it. (Jennifer Hlad/Stars and Stripes)

WASHINGTON — A congressionally appointed commission will soon deliver key proposals for reining in military personnel costs while keeping pay and benefits generous enough to maintain the quality of the volunteer force, officials say.

The report from the Military Compensation and Retirement Modernization Commission is due to be delivered to the White House and Congress — complete with draft legislation that could be used to enact the proposals — by Feb. 1. That’s just weeks before the President Barack Obama is expected to deliver his federal budget proposal to Congress.

The report will contain recommendations on hot-button topics including how to structure the military retirement system — current troops and retirees are will be grandfathered in the present system, officials stress — and the fate of popular benefits such as military commissaries.

The commission was mandated by Congress in the 2013 National Defense Authorization Act after years of hand wringing over the Defense Department’s personnel costs, which have steadily consumed about 30 percent of its base budget. The commission highlighted the steady state of personnel spending as a percentage of the defense budget when it released an interim report in June. The report was designed to show the scope of the benefits under review, the relevant laws, and a history of military benefits.

Officials inside the Pentagon and without have pushed to control costs in an era of falling defense spending, but a compensation and retirement committee spokesman said proposals for change are being weighed with great care.

The commission conducted an extensive round of town halls, public hearing and interviews with experts, as well as a troop survey, to ensure cuts don’t make the military a hard sell even for those most eager to serve, said Jamie Graybeal, a commission spokesman.

Although there has been speculation of proposals for such measures as allowing future troops who serve fewer than 20 years to collect some retirement benefits or for the elimination of stateside commissaries, the commission has played it close to the vest and military officials say they don’t know what will be in report.

In order to be ready to respond, the Pentagon is setting up working groups that will convene in early February to quickly analyze the report, according to a report Tuesday.

As outlined in a PowerPoint presentation obtained by the Military Times, the groups of officers will focus special attention on how changes could affect recruiting and retention and “develop the DOD response for Presidential consideration.”

Then on March 13, after several rounds of reviews, Military Times reported, the Secretary of Defense will deliver the official DOD response to the proposals, with formal recommendations to Congress from Obama expected to follow by April 1.