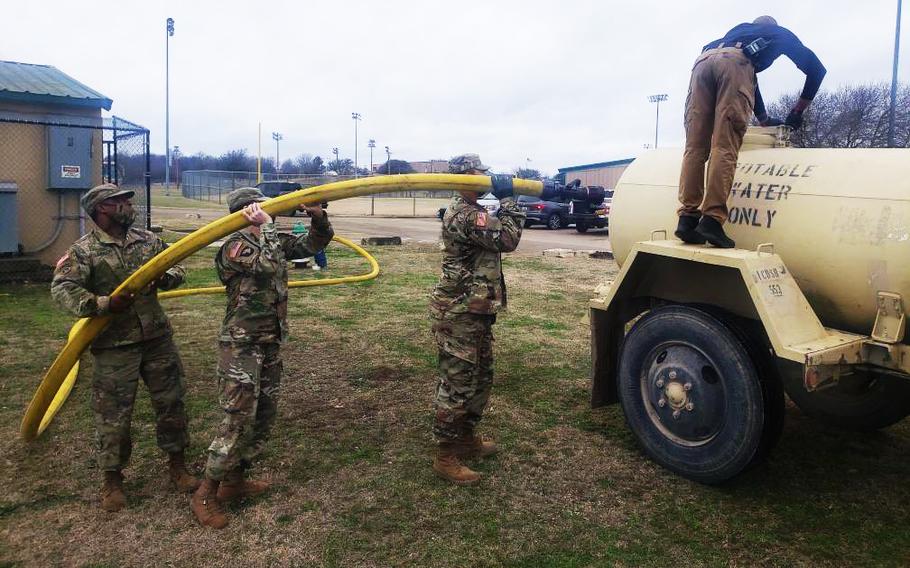 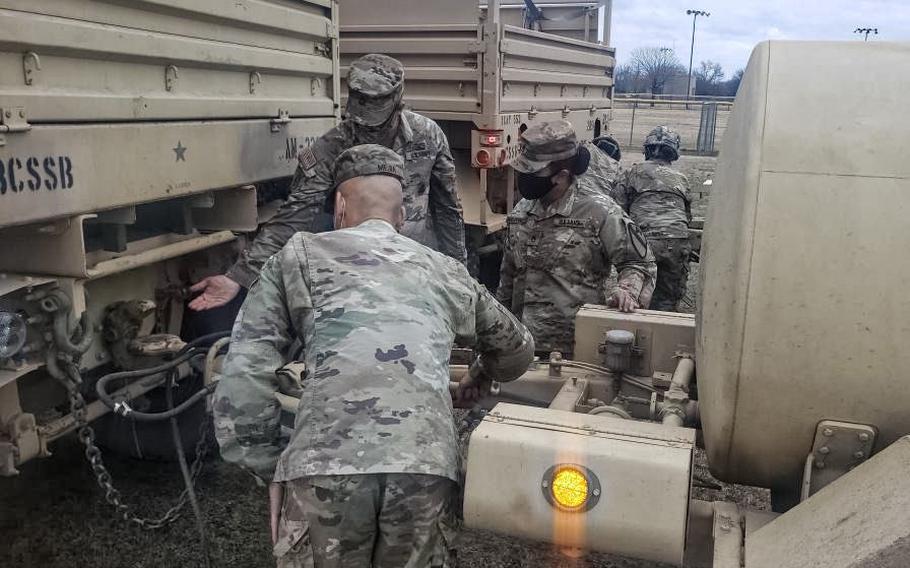 Fort Hood provided drinking water Sunday to five nearby cities impacted by the winter storm last week. The central Texas base also experienced challenges, with more than 1,000 leaks and breaks identified in base facilities. (U.S. Army) 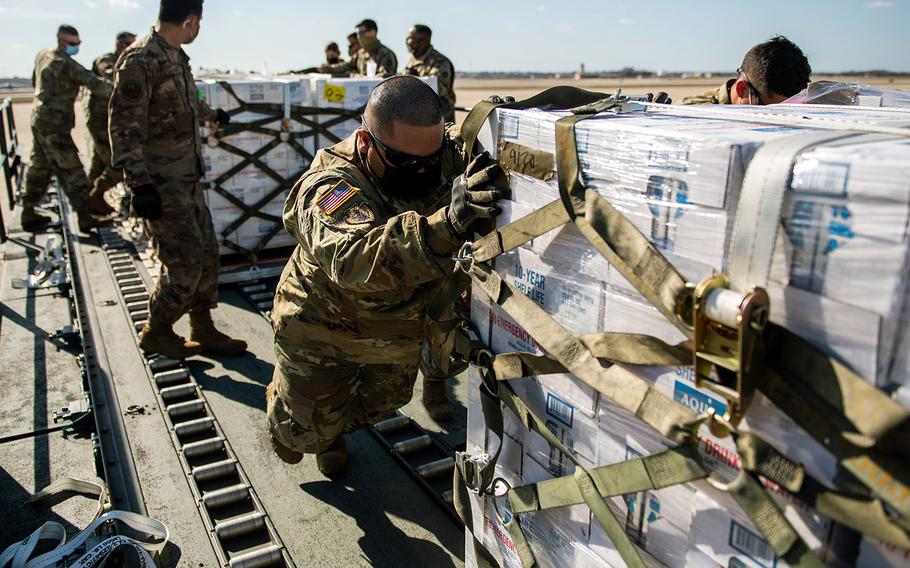 Airmen and soldiers unload pallets of bottled water Feb. 21 at Joint Base San Antonio-Kelly Field in Texas. Joint Base San Antonio provided emergency response assistance to local officials and agencies in order to ensure the safety and security of the community during and after the severe winter storm. (Sarayuth Pinthong/U.S. Air Force) 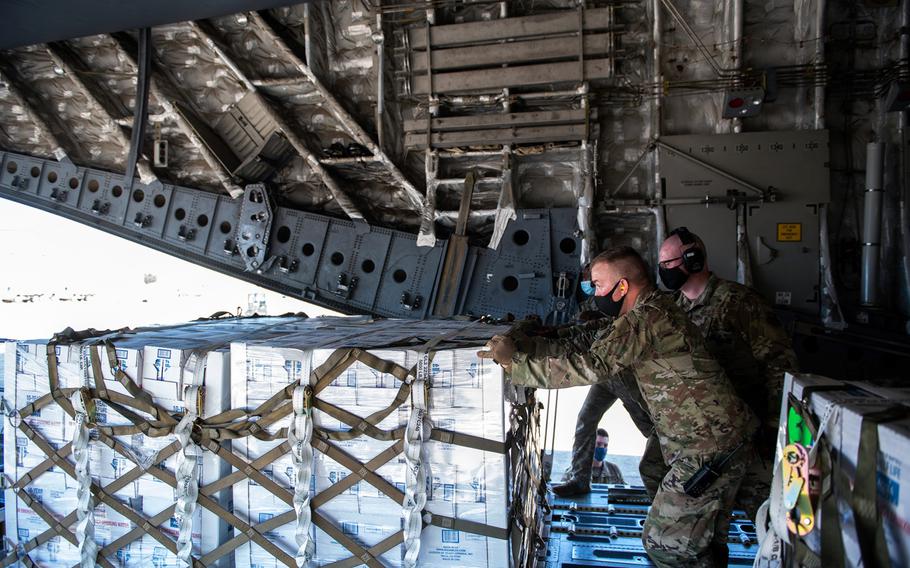 AUSTIN, Texas — As service members returned to work Monday at bases across portions of the south, officials are determining the full effects of last week’s winter storm.

Much of the devastating impacts of the storm took place in Texas, where large portions of the state spent multiple days struggling with below-freezing temperatures, snow and ice accumulation, and utility failures. Now that the weather has returned to average temperatures, Texas residents, including military families at some of the 13 bases throughout the state, continue to work to find potable water and food. Others are displaced after their homes flooded from water pipes breaking because of the extreme cold.

“Some people reported to work today and found flooded office and administrative spaces,” said Col. Myles Caggins III, spokesman for Fort Hood, where Monday was the first day in more than a week with a normal reporting schedule. “Overall, we’re doing relatively well because Fort Hood had electricity and water throughout the storm. But we are in the early stages of assessing. There are likely broken waterlines in places people have [not] visited. We have thousands of miles of water lines crisscrossing the installation.”

Delayed reporting began at Fort Hood on Feb. 11 because of dangerous travel conditions created by an approaching blast of Artic air. The central Texas Army base operated with just essential personnel for much of the next week.

More than 1,000 leaks and breaks were identified in base facilities, while Fort Hood Family Housing had about 376 water-related work orders open Monday among its 5,700 homes, Caggins said. Initial repairs were done, but maintenance crews needed parts shipped to finish the work.

Twenty-one families were moved to local hotels due to weather-related maintenance issues, Caggins said. Lendlease, the private company that owns Fort Hood Family Housing and manages the homes, paid the cost of the hotels for those families.

Positive news is emerging, said Stefanie Murphy, spokeswoman for Lendlease. During the past two days, 106 families have had water restored to their homes.

“We are tracking an increased number of available hotel rooms locally, so we now have more flexibility for displaced families,” she said. “Lendlease hired external contractors to supplement our maintenance team given the broad impacts of the storm. We are working cross functionally to extract water, identify and resolve homes with leaks, and communicate with residents. Our plumbers, carpenters, and maintenance technicians – many of whom have issues in their own homes – have been working around the clock repairing breaks and restoring service to homes.”

More than 30 of the 99 barracks buildings at Fort Hood had ongoing drinking water or heat issues Monday, Caggins said. Those in need of potable water have access and those without heat were temporarily moved.

Dyess Air Force Base near Abilene temporarily lost water last week when the city’s treatment facility shut down, said Tech. Sgt. David Scott-Gaughan, base spokesman. By Friday, the base had begun to return to normal.

“Our off-base airmen and families were most affected. We were able to move some airmen and their families from their off-base homes to base lodging to help those most affected by the utility outages with a focus on those with health conditions and families with small children,” he said. “In addition, we set up multiple warming centers on base for families, to include the base gymnasium with cots. Our first sergeants and leadership also provided water and supplies as needed.”

Now Dyess is assessing the damage to base infrastructure, which began as the base began to thaw over the weekend.

Meanwhile, service members at Fort Hood and Joint Base San Antonio have supported the surrounding communities. The 502nd Logistics Readiness Squadron at San Antonio’s Lackland Air Force Base assisted with coordinating and unloading of 80,000 bottles of water flown to the base Sunday. The water was distributed to the city of San Antonio.

Outside of Texas, Fort Sill, Okla., and Fort Polk and Barksdale Air Force Base, both in La., also felt impacts from the storm.

At Fort Sill, 76 families living in base housing had to move to hotels, said Command Sgt. Maj. Russell Blackwell, senior enlisted soldier for the Garrison Command.

About 50 restoration crews will arrive on base during the next two weeks to help with recovery efforts. Fitness centers were opened for families to stay warm and shower, while soldiers distributed water at community centers.

Corvias, the private company that manages the base housing, made similar efforts, he said.

“They were sleeping in their office to be able to answer emergency calls non-stop,” Blackwell said.

Firefighters and public works crews responded to more than 160 calls, including at a child care facility where a sprinkler system burst Thursday. It reopened Monday to support military members and Army civilians, Blackwell said.

As of Monday, the base had 183 work orders related to the storm, she said.

Chief Master Sgt. Court Sartain of the engineer squadron said the challenges of the past year prepared his team for last week.

“We started last year with a massive [coronavirus] response and posture. We had several hurricanes that caused other bases to seek refuge at Barksdale, then we ourselves had to shift gears to evacuate our ‘birds’ and readied the base for Hurricane Laura. We had a civilian aircraft crash on the installation, a mild snow and ice storm, and then topped it off with an Artic storm of the century. With every major incident, our airmen embody the ‘lead the way’ mentality and embrace the ‘can do, will do’ ethos,” he said.