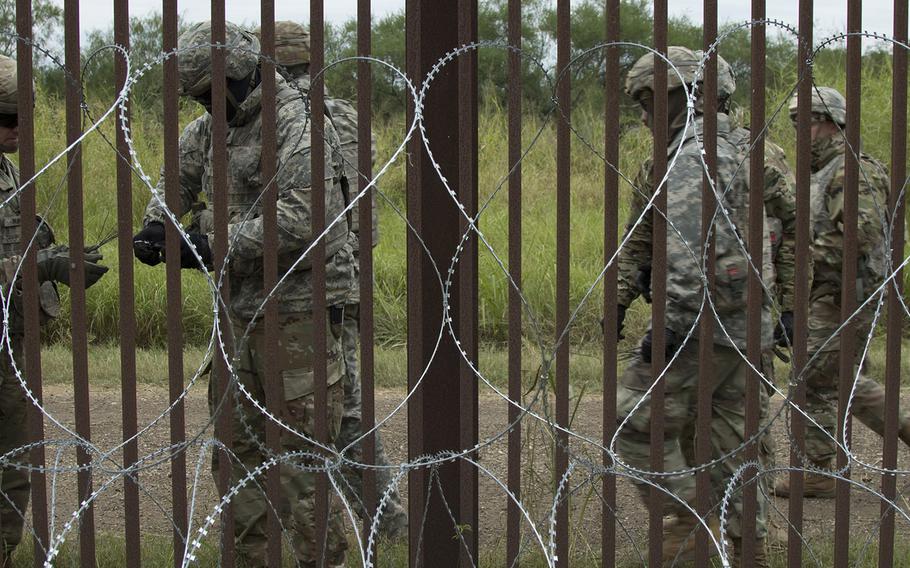 Mattis told reporters he was reviewing his options, but he did not order any immediate changes to the force posture of the nearly 5,800 active duty troops supporting the operation once known as Faithful Patriot in Texas, California and Arizona.

Measures could include use of lethal force “where necessary” as well as crowd control, short-term detention and searches of migrants, according to the officials who described the memo, which was not made public.

Troops always have the inherent right of self defense and to defend others with whom they are directly working, which could include lethal force if necessary. Mattis told reporters at the Pentagon he did not intend to issue any declaration authorizing troops to use lethal force.

As of Wednesday, Mattis said, nothing along the border had changed. He said he had neither authorized such mission adjustments nor had the Department of Homeland Security requested them.

“I am reviewing them now,” the defense chief said. “We’ll decide if [the authorities] are appropriate for the military … [and] we’ll stay strictly within accordance of the law.”

The 1878 Posse Comitatus Act bars military troops from conducting law enforcement activities outside of military installations. Mattis said he would ensure that federal law is upheld.

To date, MPs deployed to the border region have been providing security, primarily for engineering troops who have placed thousands of meters of concertina wire at locations on and near the border and for aviators ferrying CBP agents in the region. Under the new authorities, some of those MPs could be moved to work directly alongside CBP agents, one of the officials said. The official spoke on condition of anonymity to discuss the unreleased memo.

Other powers would not constitute law enforcement and, therefore, not conflict with Posse Comitatus, Mattis said.

He explained that crowd control measures would merely include placing temporary barriers near ports of entry that could be quickly closed in case of a riot.

Detaining and searching of migrants — who Pentagon officials have long insisted were unlikely to come in contact with military troops — would only occur in extreme circumstances, Mattis said, and would last “minutes not hours.”

“We do not have arrest authority,” Mattis said. “If someone is beating on a border patrolman, and we were in a position to do something about it, we could stop them from beating on him, and take [the attacker] and deliver him to a border patrolman who would then arrest them.”

The defense chief defended the deployment of the active duty troops who are operating alongside about 1,200 National Guardsmen deployed on a separate operation also in support of CBP. He likened it to past deployments of military troops under Presidents Bill Clinton, George W. Bush and Barack Obama.

The troops were deployed rapidly to the border region ahead of the Nov. 6 midterm elections as President Donald Trump repeatedly warned that a group of several thousand Central American migrants moving toward the United States to seek asylum amounted to an "invasion."

Some 2,000 of those migrants have arrived in recent days in Tijuana on Mexico’s border with California.

Under current plans, the Pentagon would send its active duty troops home by Dec. 15. Mattis told reporters that mission could be extended if DHS were to request it.

He said the mission has cost taxpayers about $72 million, according to current Pentagon estimates. That figure was likely to increase, he said.

“This is an early estimated cost,” Mattis said. “I’m confident that number will change.”