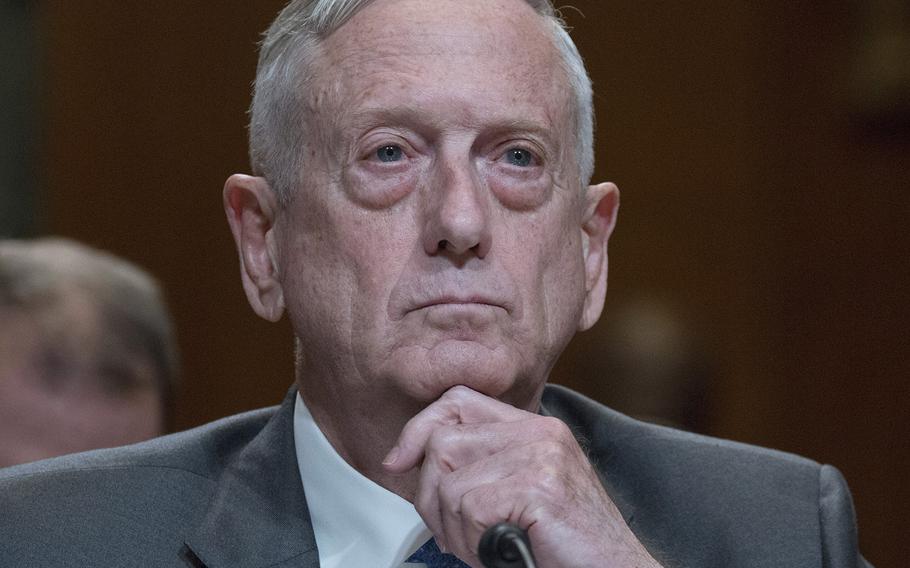 Defense Secretary Jim Mattis listens during a Senate Appropriations subcommittee hearing on the DOD budget, May 9, 2018 on Capitol Hill. (Stars and Stripes)

WASHINGTON — There are not enough women serving in traditionally all-male combat jobs to determine whether the 3-year-old policy to open all military positions to everyone has been successful, Defense Secretary Jim Mattis told a roomful of future officers Tuesday.

Prompted by a cadet’s question during an appearance at the Virginia Military Institute in Lexington, Mattis said “the jury is out” on whether women belong in close combat jobs, such as the infantry or armor units. The defense secretary’s less than full-throated endorsement of women serving in those roles drew condemnation from some advocates for women serving in combat roles.

“His remarks undermine the fearless women who have selflessly volunteered to serve their country in the most dangerous jobs in the military,” the Service Women’s Action Network, a group that advocates for female servicemembers, said Wednesday in a statement.

Mattis told the VMI cadets that he and senior uniformed officials, including Gen. Mark Milley, the Army’s chief of staff, and Gen. Robert Neller, the commandant of the Marine Corps, continue to study the issue and hope to have conclusive data soon.

“This is a policy that I inherited, and so far the cadre is so small, we have no data on it,” said Mattis, who retired as a four-star Marine general in 2013 before women could serve in such roles. “We're hoping to get data soon. There are a few stalwart young ladies who are charging into this, but they are too few.”

Officials with SWAN challenged the lack of data that Mattis cited, accusing him of obstructing the ongoing process of integrating women into once all-male units.

“When the most senior military leader makes it clear that this was not a policy that he supported but one that he ‘inherited’ he is tacitly endorsing efforts to undermine the success of the women currently serving in the infantry and in combat arms,” the group said in the statement. “He is sabotaging the efforts of his men and women who are working to integrate women, and his remarks likely put women at greater risk from those in their units who would do them harm because he has signaled that he doubts women belong in their units.”

Previously, Mattis had indicated in testimony to Congress that he would support female troops serving in the formerly closed positions as long as they could meet the same physical and mental standards that men in those roles must.

"I have no plan to oppose women in any aspect of our military," Mattis told the Senate Armed Services Committee in January 2017 during his confirmation hearing to serve as President Donald Trump’s defense secretary. "The standards are the standards, and when people meet the standards, then that is the end of the discussion on that.”

Army, Marine Corps and Special Operations Command leaders said in 2015 that they expected few women would be interested in serving in close combat roles. Only a small number of women have attempted to join those fields since the ban was lifted. But the numbers are increasing.

Women now in combat jobs have met the same standards to serve as men in the same units and many of them have “excelled,” SWAN said.

The Army has more than doubled the number of women serving in its infantry in 2018. The Army now has 51 female infantry officers and 253 enlisted women serving in the active-duty infantry, according to statistics provided by the service.

The Army has also seen 17 women complete the service’s grueling 62-day Ranger School course designed to push students to their physical and mental limits and test their infantry and leadership skills. The service used that course as its major test of women’s ability to serve in front-line combat jobs. Three of the first 19 women to attempt the course passed it in 2015. Two of those women are now serving as infantry officers.

The Marine Corps, meanwhile, has only one female infantry officer and 26 enlisted women serving in infantry roles, a service spokesman said.

The male VMI cadet who asked Mattis for his thoughts about women serving in infantry units on Tuesday noted he had “badass women” among his classmates, “some physically fitter than I am and smarter than I am.”

“It’s a very, very tough issue because it goes from some people's perspective of what kind of society do we want, you know?” Mattis said. “In the event of trouble, you're sleeping at night in your family home and you're the dad, mom, whatever. And you hear glass break downstairs, who grabs a baseball bat and gets between the kids' door and whoever broke in, and who reaches for the phone to call 911?

“In other words, it goes to the most almost primitive needs of a society to look out for its most vulnerable.”

Another advocate for female servicemembers, retired Marine Lt. Col. Kate Germano framed the issue another way, writing on Twitter that she was concerned about Mattis’ comments.

“We need to reframe it as an issue of the talent pool, not individuals,” she wrote. “The question for senior leaders is that they won’t be able to meet … the challenges of our national defense and recruiting pools by relying on less than 50 [percent] of the recruitable population. It’s about talent and the long game.”