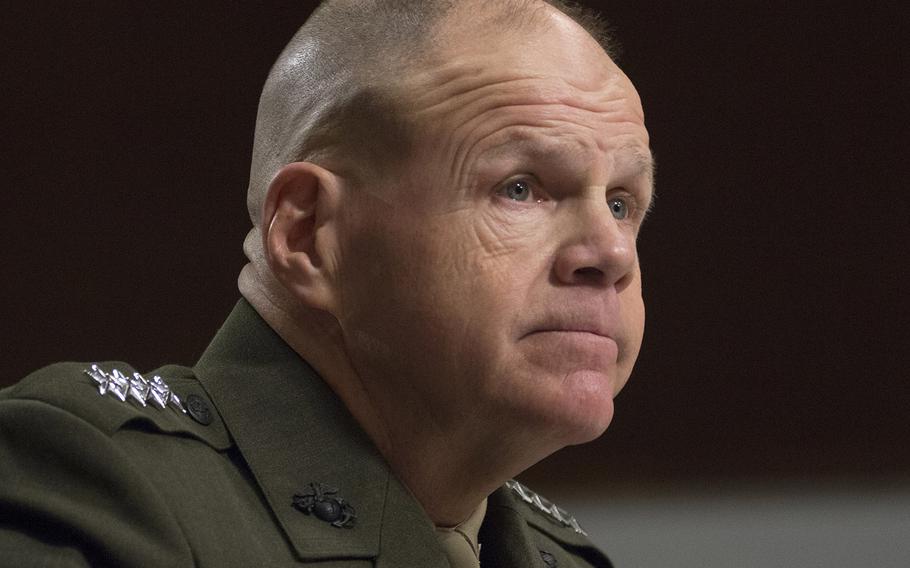 WASHINGTON — Marines who act illegally or immorally on the Internet will be punished, according to the Marine Corps’ new social media policy released in the wake of an illicit-photo sharing scandal.

Punishments could include charges under the Uniform Code of Military Justice, Marine Commandant Gen. Robert Neller wrote Friday in a message to all Marines.

Neller’s message included an updated social media policy, which was originally released in 2010 but made no mention of criminal consequences for online actions.

“Marines must never engage in commentary or publish content on social networking platforms or through other forms of communication that harm good order and discipline or that bring discredit upon themselves, their unit or the Marine Corps,” Neller wrote in the message. “In other words, Marines should think twice before engaging in questionable online activities, and must avoid actions online that threaten the moral, operational readiness and security, or public standing of their units, or that compromise our core values.”

Neller cited specific examples of UCMJ charges that Marines could face for posting “commentary and content” that defames, threatens, harasses or discriminates against others. He added such conduct could additionally violate state or federal law or expose servicemembers to civil actions.

The Marine Corps will require all Marines to sign an acknowledgement that they had reviewed and understand the new policy, said Marine Brig. Gen. James F. Glynn, the service’s communications director. The social media policy had not previously included such an obligation.

Glynn said the official acknowledgements will aid the service in punishing Marines who choose to violate the policy, especially those actions that do not amount to criminal activity.

Servicemembers could face a variety of administrative punishments through their commands if they are found to be involved in online misconduct, Glynn said. Signing the new policy “lessens the administrative burden of proof” on the Marine Corps to initiate such actions, he said, because “you will have knowingly violated clear guidance published by the commandant of the Marine Corps.” Administrative punishments vary in scale but have the potential to end a servicemember’s military career.

It is likely the Marine Corps will use such administrative punishments against at least some Marines found to be involved in the ongoing nude-photo sharing scandal, which is being investigated by the Naval Criminal Investigative Service, officials said. NCIS will share information it uncovers about Marines with the Marine Corps, even if it does not charge them with a criminal offense, said Curtis Evans, an NCIS division chief.

Nonetheless, the NCIS does expect to seek felony-level charges against some individuals involved in the nude photo-sharing scandal that initially began as a probe into the private Facebook page Marines United, where current and veteran male Marines allegedly shared a secret drive containing hundreds of photos – some nude – of female Marines without their consent. The secret webpage was also said to contain threats of rape and other harassing statements against the women, according to a March 4 report by the nonprofit news agency The Center for Investigative Reporting and veterans’ news website The War Horse that revealed the scandal.

Before it was shut down, Marines United had some 30,000 members. NCIS has identified 1,253 page members, including 725 active-duty and 150 Reserve Marines, as well as 15 sailors, Evans said. Not all of those servicemembers appear to be involved in illicit activity, he said.

The investigation has expanded to other websites since it was launched in February, Evans told reporters at the Pentagon on Friday. He said about 20 women have come forward as victims and investigators expect that number to rise. The Army, Air Force, Coast Guard and FBI are also investigating the reports.

Stars and Stripes identified at least two additional webpages on which anonymous users claiming to be active-duty servicemembers regularly share explicit photographs of women who are purported to be in the military.

Many of the photographs are selfies, presumably shared privately but not intended to broadcast on the Internet.

The Marines new social media policy does not provide any new laws or regulations to help prosecutors bridge that gap. Any changes to military law must be approved by Congress.

The Marines were not the only military service to address servicemembers’ online behavior last week. Senior leaders from across all the forces took to social media and official channels to remind their troops they are responsible for their conduct.

The Army released a letter Friday signed by senior leaders, including Gen. Mark Milley, the service’s chief of staff, reminding soldiers to “think” before they post anything to social media.

“We are all figures of public trust and our conduct must be exemplary,” the letter stated. “Trust … is forever weakened or erased when a fellow solider is victimized by disparaging and degrading comments made in person or posted on social media.”