Marines lag behind in bringing women into ranks 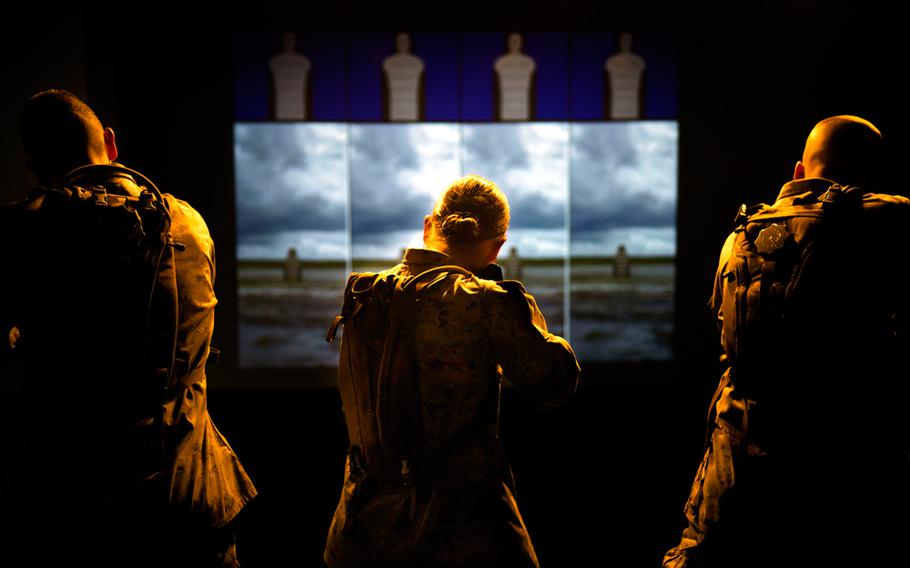 WASHINGTON — Marines may be the tip of the spear in battle, but not so much when it comes to bringing women into the ranks.

As barriers continue to fall, most recently with the historic graduation of two women from the Army’s grueling Ranger School, just 7 percent of Marines are women, the lowest percentage of women of any branch of the military. That has much to do with the Marines emphasis on light infantry, but critics say it’s also partly due to an ingrained change-averse culture.

But resisting the tide might be more difficult with the Ranger School news (although those women still can’t join the actual Ranger Regiment) and the Navy’s chief of operations all but saying that the SEALs, the military’s most elite special operations unit, will open to women. The Marine Corps, while a distinct branch, falls under the Department of the Navy.

“Just like with ‘don’t ask, don’t tell,’ the Marines seem to be the last branch to speak up and do the right thing,” said Marine veteran and activist Anu Bhagwati, who founded the Service Women’s Action Network, the group behind the lawsuit that helped push the Pentagon to open more jobs to women. “The good thing for us is that the Marine Corps belongs to the Department of the Navy.”

One huge factor in the low percentage of women in the Marines, of course, is the Corps’ emphasis on light infantry positions, coupled with the former armed services rule barring women from combat roles. But while the other three branches have been rapidly changing in the past two years, out of the 111,000 formerly restricted positions that have opened to women, only 11 were in the Marines.

Earlier this year the Marines held a massive, three-month simulated combat deployment in the high desert outside of Twentynine Palms, Calif., with mixed infantry units to study the feasibility of opening infantry positions to women.

Marine Corps spokesman 1st Lt. Philip Kulczewski, who participated in that exercise, said the Marines are not resisting change, simply stripping out the emotion from the debate and looking only at facts.

“I would say we’re taking a data-based, responsible and very deliberate approach to integrating,” he said. “You really need to separate the two issues -- there’s advancing women throughout the services and increasing opportunities and national security issues and you really need to take a hard look at things.”

Kulczewski also said the news from other parts of the military, such as the Rangers and SEALs, wouldn’t affect the Marines’ decision.

“We’re taking a look at integration through the lens of the Marine Corps, so we’re not worried about other branches,” he said.

Pentagon officials, though, have said opening more jobs to women is a collaborative process.

“The Services and Special Operations Command have been sharing information and lessons-learned throughout that entire process,” Davis said in a released statement. “Beyond regularly occurring meetings at the Office of the Secretary of Defense and Joint Chiefs level, the Services (at all levels) routinely cross share information, lessons-learned, and best practices.”

None of the branches volunteered for the changes currently being considered. The lawsuit filed by SWAN and four female war veterans in late 2012 to open combat jobs to women came before then-Secretary of Defense Leon Panetta launched the process of more fully integrating the military in January 2013.

The Pentagon’s highest-ranking officials have until Jan. 1, 2016, to open all jobs to women or request formal waivers for those they want to remain closed. Defense Secretary Ash Carter will have to sign off on any waivers.