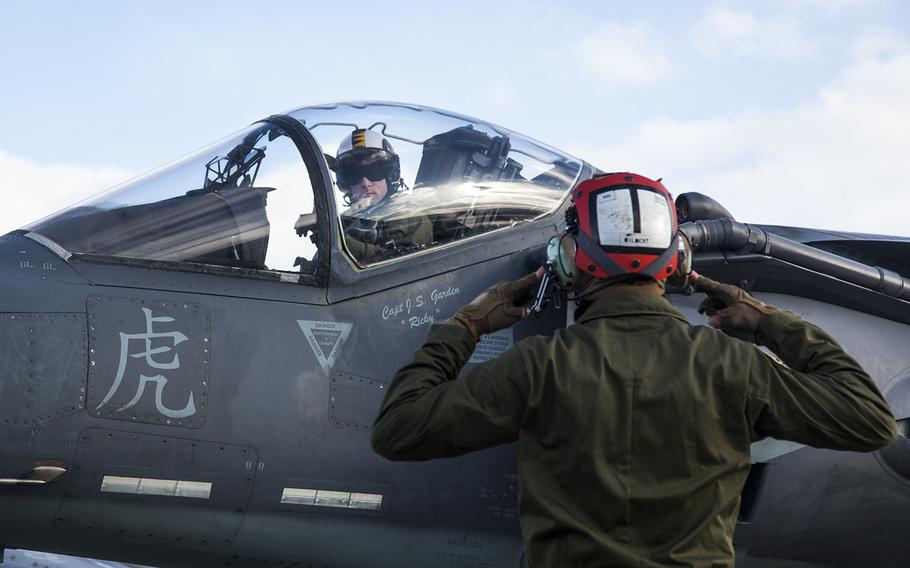 A U.S. Marine Corps AV-8B Harrier with Marine Attack Squadron 542 waits on the flight line before a routine inspection during the Aviation Training Relocation Program at Chitose Air Base, Japan, Dec. 7, 2016. (James A. Guillory/U.S. Marine Corps)

WASHINGTON – The number of ground accidents for Marine Corps aircraft has more than doubled over the last five years, costing the Marines thousands of flying hours due to broken aircraft, the head of Marine Corps aviation told reporters Wednesday.

Class C ground incidents – when an airframe sustains $50,000 to $500,000 in damage -- include damage caused while towing planes on base, or by maintenance errors, said Lt. Gen. Jon Davis, deputy commandant of Marine Corps aviation.

According to data provided by the Naval Safety Center in Norfolk, Va., Class C mishaps rose from 12 in fiscal year 2012 to 29 in fiscal year 2016. The Class C mishaps are the third-most damaging type. Class B incidents occur when an aircraft sustains $500,000 to $2 million in damage and leaves crew with significant injuries. Class A mishaps occur when an aircraft has sustained more than $2 million in damage and leads to a permanent disability or death.

The Marines have said that budget cuts and a continued demand for its planes for air operations have led to the increases in all types of incidents.

In the last five years, Davis said, the Marine Corps estimates it has lost 1,023 flying days to Class C ground mishaps that have taken planes off flying status.

“Each and every one of those on average – those ground mishaps -- takes an airplane off flight schedule for 43 days,” Davis said.

The Marine Corps reviewed the last five years of ground incidents to identify reasons behind the increase, Davis said. Besides the pace of operations and budget cuts, one of the key takeaways was that a lack of spare parts was contributing to the number of maintenance error incidents.

“They’re making mistakes in some cases because they are cannibalizing parts off one airplane to go make another one,” Davis said.

Davis said the service will press for more spare parts Feb. 8 when it goes to Congress to discuss readiness levels and budget needs.