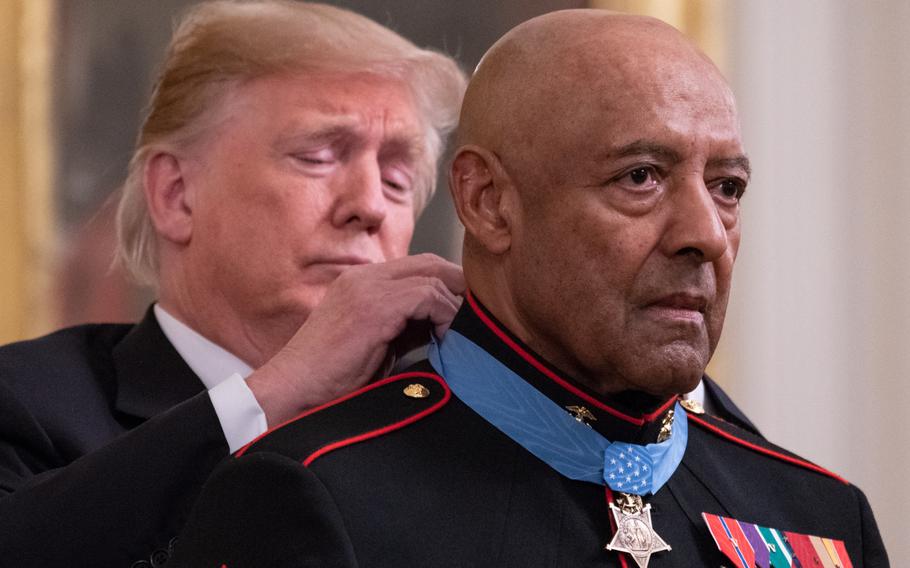 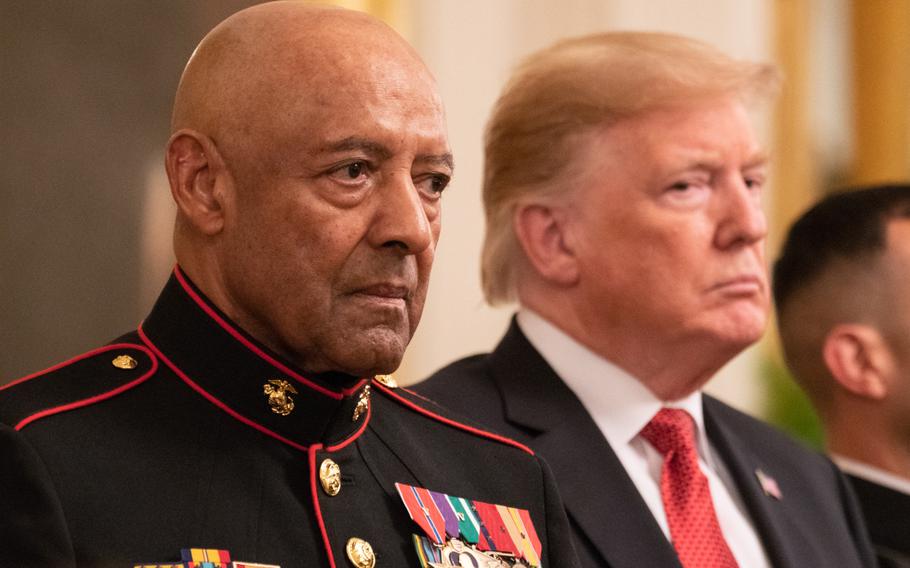 WASHINGTON — Nearly 51 years after the battle that would launch John L. Canley into the annals of Marine lore, the retired sergeant major stood stoic in the White House on Wednesday as he received the nation’s highest military honor.

Shouts of “oorah,” the Marine Corps' legendary battle cry, rang through the East Room and the standing-room-only crowd of Canley’s fellow Vietnam veterans and top military brass cheered the 80-year-old as President Donald Trump presented him the Medal of Honor. The Marines who fought alongside Canley in Vietnam’s brutal Battle of Hue had worked for years to see him receive the award – an upgrade of the Navy Cross that he was awarded in 1970.

Canley is the 300th Marine to receive the medal.

Trump, echoing the comments of Canley’s fellow troops, said Canley had showed throughout his entire life that he was a Marine’s Marine.

He is “a Marine warrior, who is bigger than life and beyond the reach of death. He is truly larger than life,” Trump said before turning to Canley. “There are very few people — brave, brave people — like you, John.”

On Jan. 31, 1968, Canley was suddenly called upon for a job that he never expected to have. With his company commander severely wounded as his unit made its way toward the besieged city of Hue in northern South Vietnam, then-Gunnery Sgt. Canley took control of Alpha Company, a job typically reserved for a commissioned officer.

For the next six days, Canley would lead the 1st Marines unit as it charged into the city to pry it from the North Vietnamese and Viet Cong forces who had captured it during the unanticipated Tet Offensive.

In the midst of one of the most ferocious fights of the Vietnam War, Canley would organize assaults on enemy positions, killing countless enemy fighters as his team retook buildings in the city, according to award citations. Twice, the noncommissioned officer braved fire to scale a wall in “full view of the enemy to pick up wounded Marines and carry them to safety.”

“In one instance after another, John risked his own life to save his Marines,” the president said. “He just continued to face the enemy with no regard for his own life.”

Canley of Oxnard, Calif., has credited the Marines that he served with for his receiving the award and his numerous acts of valor during that fight.

The Medal of Honor “means a lot to me,” Canley said in an interview earlier this year with USA Today. “Mostly for my Marines, because we’ve had to wait 50-plus years to get any kind of recognition. It’s not about me. It’s about the Marines who didn’t [receive] the appropriate recognition when we got home.”

Canley did not make a public statement at the White House on Wednesday.

In addition to the Medal of Honor, Canley received the Bronze Star with “V” device for valor, the Purple Heart and the Navy and Marine Corps Commendation Medal with “V” device for valor for his service in Vietnam between 1964 and 1970, according to his Marine biography. He retired from the service in 1981 as a sergeant major after serving 28 years in the Marine Corps.

In a brief video produced by the Marine Corps, Canley said it was the men who fought alongside him who kept him going during the Battle of Hue from Jan. 31 to Feb. 6.

“My Marines because they believed in me, they would follow me to death,” he said in the video published Tuesday. “And I have no doubt about that.”

Canley is the seventh person to receive the Medal of Honor from Trump and the third to receive the award from him for actions during the Vietnam War.

All seven Medals of Honor that Trump has presented have been upgrades of previously awarded lower valor honors. While some of them are the result of a Pentagon-ordered review of Post-9/11 valor awards, others such as Canley have been the result of years of effort by friends and family of the recipients.

For Canley, the Medal of Honor upgrade required an act of Congress because of the amount of time that had passed since the war. Rep. Julia Brownley, D-Calif., sponsored the bill approving the upgraded award, which was passed in January.

“Sgt. Maj. Canley is a shining example of why our armed forces are the best military in the world, and his heroism and bravery showcases what being an American hero truly means,” Brownley said last month following the White House’s announcement of the award upgrade. “I look forward to Sgt. Maj. Canley finally receiving this much-deserved honor, and thank him for his unwavering dedication to our nation and his fellow servicemembers.”