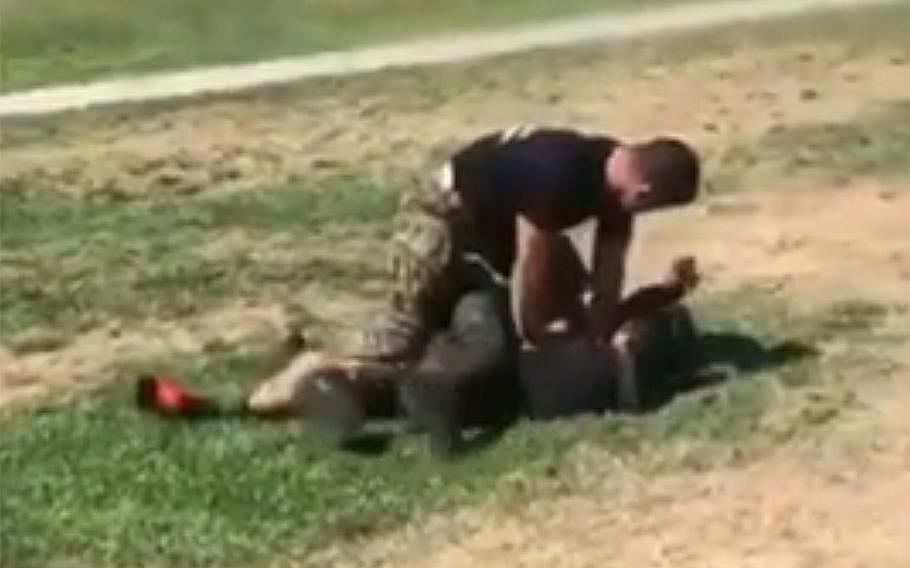 A screen capture from the video of the incident at Edison High School in Stockton, Calif. ()

Two teens were engaged in fisticuffs on the grounds of a California school when a Marine sprinted across the lawn, tackling one of them from behind and taking both kids to the ground in an incident captured on video and now under investigation.

School district officials are looking into the matter, which took place Wednesday at Edison High School in Stockton, the district wrote in an email after video of the incident began circulating widely on social media.

The footage shows Pfc. Josue Valdez Sarmiento stand up after the tackle, separate the two brawlers and strut away into the distance to join another Marine. One of the kids gets up, but the other doesn’t and lays on the ground as adults arrive on the scene.

“He just wanted to do what was right for the school” when no one else was stepping in, said Sgt. Jocelyn Ontiveros at the Marines’ Sacramento recruiting station, which oversees the substation in Stockton where Valdez Sarmiento is helping out with recruiting while home from boot camp. “The Marine Corps doesn’t condone violence.”

A recent graduate of Edison High, Valdez Sarmiento was in a “boots and utes” — camouflage trousers and combat boots with a t-shirt and no uniform top. He was touring the campus, speaking to students with recruiter Sgt. Sean Colosi when he saw the two boys scuffling, the Marine Corps has said.

In the video, the boys are seen flailing their arms at each other. One kicks at the other before falling down, getting back up and kicking again. Few of either boy’s blows appear to land anywhere but the other’s arms or back.

“He saw a dangerous fight break out,” Maj. Thomas E. Driscoll, the recruiting station’s commanding officer, said in a statement. “We recognize Pfc. ValdezSarmiento’s desire to do the right thing.”

“I feel like going at a kid, especially when he’s not looking, makes more of an impact,” Hemphill said.

Video of the event was posted Thursday on Marine Corps social media groups and forums, where some commenters have praised the Marine’s initiative but questioned his execution.

A Reddit user who claimed to be ValdezSarmiento posted an offer of “ask me anything,” or AMA, on a Marine forum there.

“I am Josue Valdez Sarmiento, the Stockton High School [recruiter’s assistant], up and coming offensive linesman and soon to be NJP’ed Marine. AMA!” the post read, using an abbreviation for nonjudicial punishment. Another post sharing the video called the recent boot camp graduate a “tan belt warrior,” a reference to the lowest color belt ranking in the Marine Corps Martial Arts Program, and deemed the students “two small teens.”

A slowed-down version of the video shared on that post shows the first boy’s head snap back when Valdez Sarmiento wraps him up, and then his head snaps forward into the second kid as they all go to the ground.

“What was he actually thinking?” one commenter wrote. “U didn’t have to break the kids back to stop them from fighting.”

Neither of the students reported injuries immediately following the event, the Marine Corps Recruit Depot in San Diego said in a statement. The Stockton police department also had personnel on campus at the time and assisted with the situation after the kids were tackled, the statement said. The police told KCRA News that the school is handling the inquiry into the matter.

Meanwhile, videos of the event have been sent to the recruiting command and Valdez Sarmiento has been counseled on better ways to intervene in the future, the recruit depot’s statement said.

“We will continue to guide and mentor Marines to respond to stressful situations with the appropriate level of involvement,” Driscoll said.