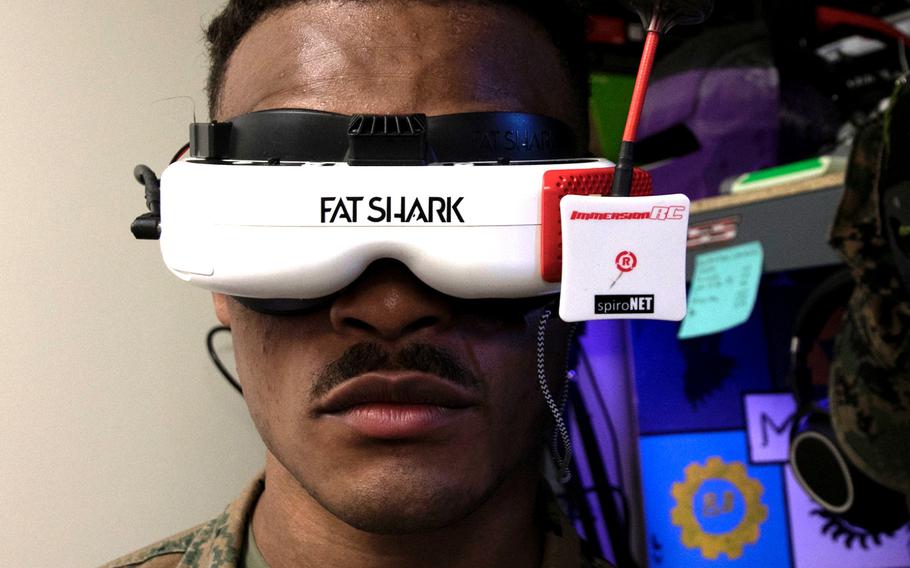 Buy Photo
Marine Cpl. Malik Pugh shows off a pair of goggles that allow him to see from the perspective of one of his homemade drones at Camp Kinser, Okinawa on Feb. 22, 2021. (Matthew M. Burke/Stars and Stripes)

CAMP KINSER, Okinawa — The buzz among Malik Pugh’s fellow Marines finally caught the attention of his platoon commander in the 3rd Marine Logistics Group during a routine inspection back in August.

Warrant Officer Joseph Kimmel said he harbored some trepidation about then-Lance Cpl. Pugh’s living quarters after hearing whispers about what he would find there.

“When I make it to his room, all I see is tech and electronics everywhere,” Kimmel said in a March 18 email to Stars and Stripes.

The Marine Corps also took notice of Pugh, who was recently promoted meritoriously to corporal.

Pugh sees numerous opportunities where his expertise can benefit the Marine Corps, from 3D-printed covers to protect gear from the elements to custom tools and even reconnaissance drones to assist ground troops by making them more aware of their surroundings.

The III Marine Expeditionary Force on Okinawa has shown a willingness in recent years to integrate the ideas of tech savvy Marines, through unit leadership and by hosting invention competitions.

“He is extremely intelligent and technically savvy,” Kimmel said. “He has a very bright future.”

A self-described military brat who bounced around a lot as a child, Pugh finally settled outside St. Louis in a small town called Fairview Heights, Ill., he said on a sunny February afternoon outside the warehouse where he works.

From “Bob the Builder” toys and Legos, Pugh graduated to tinkering with whatever electronics he could find around the house.

“It’s been like that since I was a kid,” he said. “I can’t think of a time when I didn’t want to build something.”

Candy from aboveDiscovering radio-controlled cars in his formative years, with their batteries and motors, was a game-changer, he said. After he built a car that went 50 mph, he wanted to see what he could do in the air. He saved his lunch money in middle school to buy the parts to build his first drone.

Pugh said he rigged one to drop candy before unsuspecting trick-or-treaters on Halloween.

In middle school, Pugh took robotics’ courses and built robots, he said. He learned enough about motors and actuators to attempt his first humanoid robot. It was a disaster.

“It was a freak of nature, honestly,” he said with a laugh. “It didn’t even get off the ground … but it was a good taste of what I wanted to do.”

After high school, Pugh found himself rudderless. He tried college and worked two jobs, but he felt redundant and unaccomplished, he said. In 2019, he joined the Marine Corps. Today he’s responsible for setting up a complement of ground terminals for satellite communications.

The humanoid robot he calls Project Alita, after the 2019 action film “Alita: Battle Angel,” sits atop his work bench, minus a head.

The first step for Alita will be walking and navigating the room, Pugh said. Then he hopes it will identify objects and people it sees frequently, building a profile for each person and varying its reactions depending on its familiarity with them.

Alita will be self-sufficient and able to charge itself on its own, Pugh said. Lastly, he hopes to teach the robot certain protocols, like chores. But mostly he wants it to be a funny companion he can interact with.

Pugh has also built a remote-controlled, motorized long skateboard with brakes that takes him to and from work each day, and several drones that perform various functions. He’s also working on a robot that can vacuum and mop the floor as it moves around like a Roomba.

“Growing up with more advanced technology is an advantage that younger Marines have over those of us that are a little more seasoned,” Kimmel said. “Each new Marine that I have seen come in after me has been a little bit smarter than the previous.”