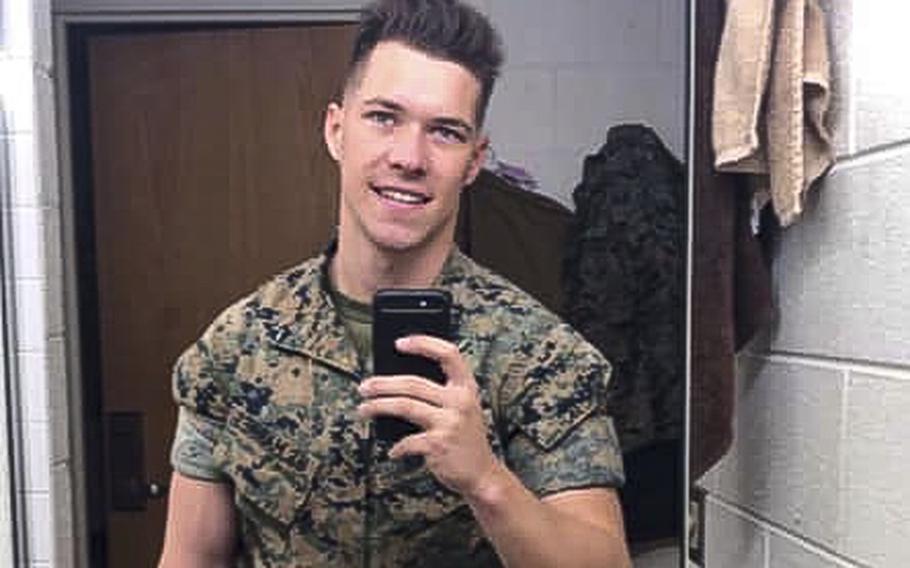 Riley S. Kuznia is shown in this undated photo from social media. (Facebook)

WASHINGTON— The Marine guard shot New Year’s Day at barracks in the city’s southeast section was killed by a bullet fired by a fellow guard, according to new details released Thursday.

Lance Cpl. Riley S. Kuznia, 20, was shot at about 5 a.m. while on guard duty at Marine Barracks Washington, D.C. He was transported to a local hospital where he was pronounced dead at about 5:59 a.m., according to a statement released Thursday afternoon by the Marines.

The shooting is being investigated by the Metropolitan Police Department as a death investigation, not a homicide, the Marines said. The bullet that killed Kuznia was fired from the other guard’s service weapon.

“The Marine who fired his weapon was relieved of his guard duties at the barracks and reassigned to administrative duties pending the completion and outcome of the investigation,” the statement read.

The Marine who fired his weapon was not identified. More so, neither police nor the Marines have given a public account on how Kuznia was shot.

According to a Washington Post report, three officials familiar with the investigation said detectives are looking into two possible scenarios: that a weapon discharged as it was being passed from one Marine to another during a shift change, or a Marine accidentally fired a sidearm as it was being removed from a holster.

“The safety and well-being of the Marines, sailors and civilians here at the barracks is paramount, and something we take very seriously,” Col. Don Tomich, commanding officer of Marine Barracks Washington, D.C., said in the Thursday statement.

Barracks leadership will decide if any additional safety measures are needed once the investigation is completed, according to the statement.

This is the third time in six years that a Marine has been injured from a gunshot wound on the installation. Last June, another Marine in Guard Company intentionally shot and wounded himself, Marine Barracks spokesman Gunnery Sgt. John Jackson confirmed in an email.

In 2013, a 19-year-old Marine died a day after shooting himself in the head at the barracks. Police at the time ruled it an accidental discharge.

Marine Barracks Washington, D.C. is about a half-mile from the Washington Navy Yard and home to the Marine Corps Commandant. It hosts “Evening Parades” on Fridays throughout the summer, featuring the Marine Corps band, the service’s drum and bugle corps and its silent drill platoon.