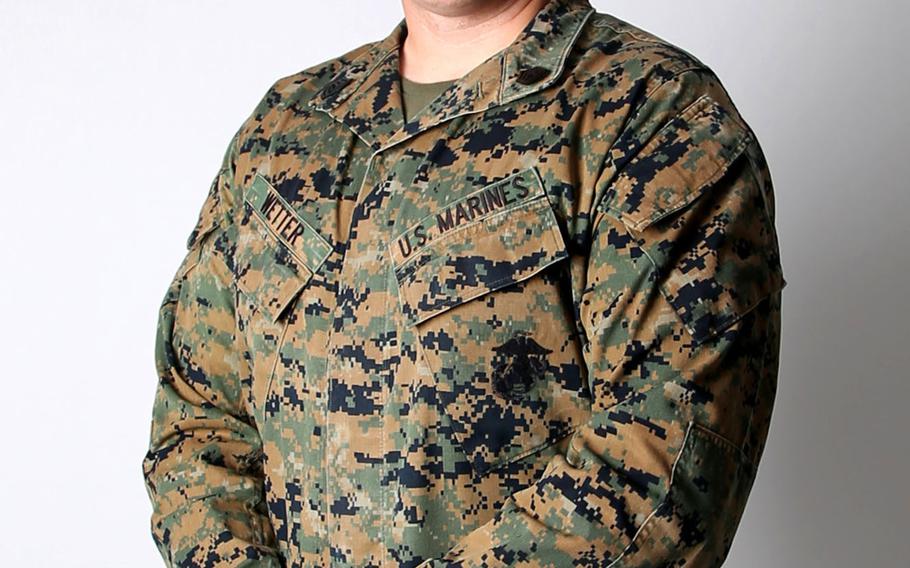 Marine Gunnery Sgt. Kyle Wetter sprang into action to help save the life of an 18-month-old child trapped in a burning vehicle in Fallbrook, Calif., Dec. 7, 2020. (Andrew Cortez/U.S. Marine Corps)

Marine Gunnery Sgt. Kyle Wetter sprang into action to help save the life of an 18-month-old child trapped in a burning vehicle in Fallbrook, Calif., Dec. 7, 2020. (Andrew Cortez/U.S. Marine Corps) 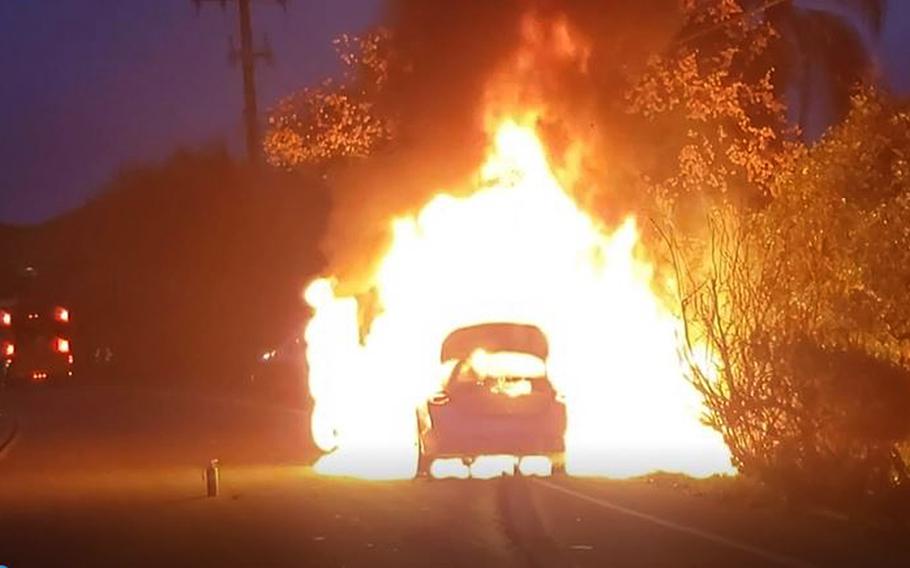 Gunnery Sgt. Kyle Wetter was driving home from base earlier this month when fire burst out under the car in front of him, after it ran over a gas can that had fallen off a truck.

The Marine’s quick actions as flames engulfed the vehicle would help save the life of an 18-month-old child on Dec. 7 in Fallbrook, Calif., a town on the back side of Camp Pendleton, north of San Diego.

After the car’s driver, Anthony Hurly, slammed on the brakes and pulled over, Wetter did the same, jumping out of his vehicle armed with a fire extinguisher, a Marine Corps statement said this week.

Both the driver and his wife were out of the vehicle by the time Wetter arrived, and he initially thought everyone was safe, he said in a video the service released Tuesday. But his extinguisher would be no match for the growing blaze.

“At this point, there was vegetation that was also burning adjacent to the vehicle,” Capt. John Choi, a spokesman for the North County Fire Protection District, said in the video. “Gunnery Sgt. Wetter came in and made contact with the wife ... and she said, ‘My baby’s in the back.’”

Wetter saw Hurly run to the passenger side of the vehicle to try to get the child out of the car seat, so he jumped into the back seat to assist. Hurly couldn’t dislodge the seat from its base and when Wetter tried to unbuckle the seatbelt, he had no luck.

“At that point is when I used my pocket knife to cut the car seat belt that was holding the baby seat into the car,” he said. “I grabbed as many belongings as I could from the car for the family as I was going out of the vehicle.”

He then moved away from the car, which he said was completely engulfed in flames.

Wetter, an NCO in charge of the formal marksmanship training center at Camp Pendleton, credited his infantry training with conditioning him to quickly respond to the situation.

“His actions embody honor, courage, commitment,” Choi said. “It took tremendous courage to go into a burning vehicle to aid this family and I truly believe if Gunnery Sgt. Wetter didn’t do his actions that day that we would have a different outcome for this child and the family.”

But Wetter doesn’t think he’s special by any means, he said in the video. “I was just the person behind them that decided they want to help someone else.”

Wetter is a new father of triplets, San Diego’s KSWB Fox affiliate reported last week. He told the local station that he hoped someone would do the same for his wife and children if they were in a similar situation.

Still, his help for the Hurly family will not soon be forgotten.

“I am forever grateful,” Hurly was quoted saying in the Marine Corps statement. “He came at a time of need for my family.”