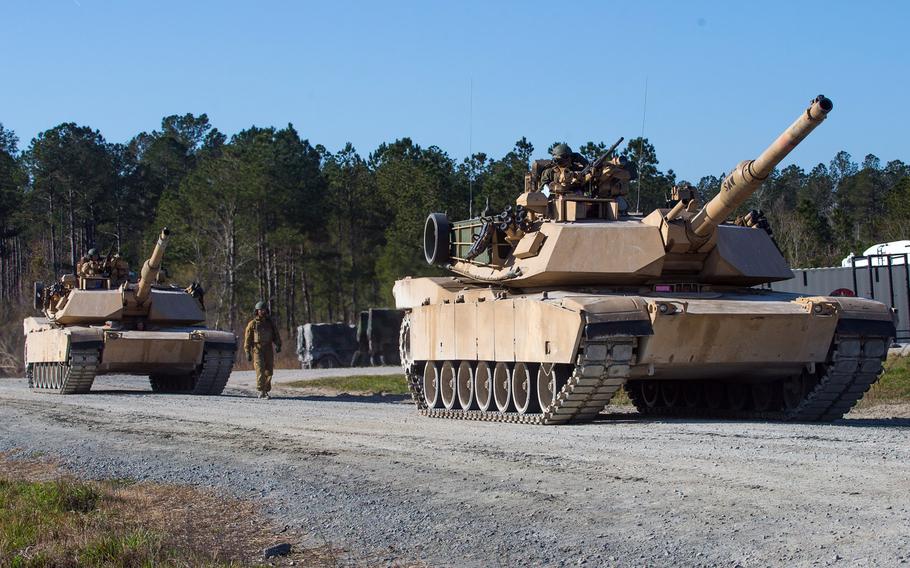 Marine Corps M1A1 Abrams tanks with 2nd Tank Battalion, 2nd Marine Division enter the firing range at Camp Lejeune, N.C., March 11, 2020. Marines in tank-related fields could qualify to leave the service up to one year early under as the service divests itself of heavy armor, in favor of a lighter force. (Reine Whitaker/U.S. Marine Corps)

Marine Corps M1A1 Abrams tanks with 2nd Tank Battalion, 2nd Marine Division enter the firing range at Camp Lejeune, N.C., March 11, 2020. Marines in tank-related fields could qualify to leave the service up to one year early under as the service divests itself of heavy armor, in favor of a lighter force. (Reine Whitaker/U.S. Marine Corps) 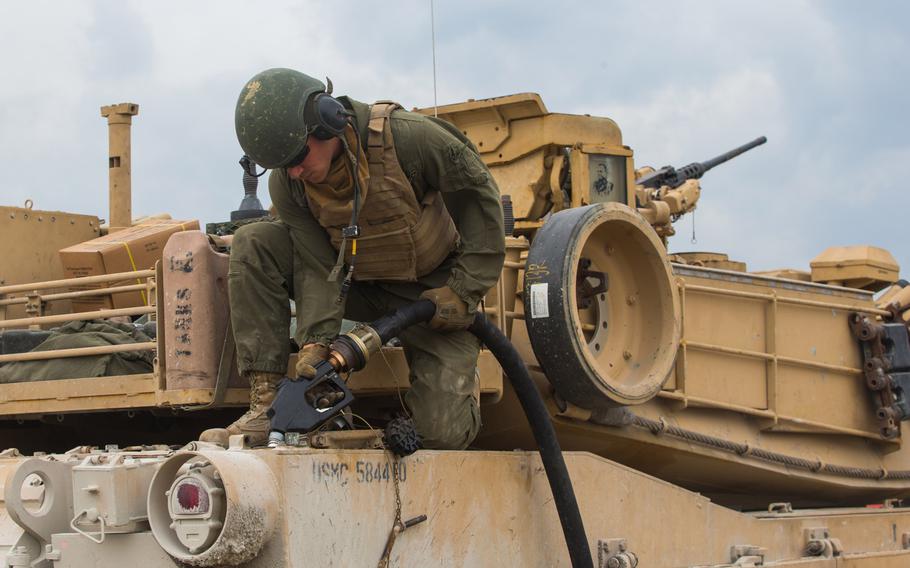 Marines in tank-related fields could qualify to leave the service up to one year early under a “surgical reduction in personnel” as the Corps sheds its heavy armor in favor of a lighter, more agile force.

Eligible enlisted armor Marines, senior armor staff noncommissioned officers, tank officers and main battle tank repairer/technicians may be approved to separate up to 365 days before the end of their expiration of active service, the Marine Corps announced last week.

The programs are part of the Corps’ efforts to pare down its armor job fields, which began this spring after Marine Commandant Gen. David Berger announced plans to divest the service of its M1A1 Abrams main battle tanks and M1150 Assault Breacher Vehicles.

Early this year, Berger announced plans to shutter the service’s tank battalions as part of a 10-year redesign.

“As we implement Force Design to modernize the force for naval expeditionary warfare … we will begin a surgical reduction in personnel and realignment of specific capabilities and units,” said Col. Christopher Escamilla, branch head for Marine Corps Plans, Programs and Budget, in a statement last week.

Plans also call for eliminating law enforcement units and slashing the number of cannon artillery battalions, reducing and restructuring infantry battalions and disbanding aircraft squadrons as the service aims to trim 12,000 troops from its ranks by 2030.

Some of the cuts are meant to free up resources for modernization without asking Congress for more money.

“These redesign efforts will enable the Marine Corps to reinvest time, money and resources into higher priority areas, which includes emerging technologies and significant changes in force structure,” Escamilla said in the statement.

Earlier this year, the service began allowing service members in the four tank-related specialties to change jobs, change services or, for those with 15 years of service, retire early.

By the end of the fiscal year in September, some 130 Marines in those fields had applied to switch job fields, six had requested early retirement and 46 had asked to change services, Marine Corps data showed.

Nearly 650 Marines had yet to submit requests for any of those options. Marine Corps officials have not said how many troops would be eligible for the early release program.

An earlier message gave Marines in tank fields and some law enforcement officers until April 2022 to choose what course they’d take, or the Marine Corps would reassign them to new job fields based on its own needs.

To qualify for early release, Marines must be eligible for an honorable or general discharge under honorable conditions, the messages stated.

Approved release from active service under the programs does not exempt participants from reserve or inactive ready reserve commitments, the service said.