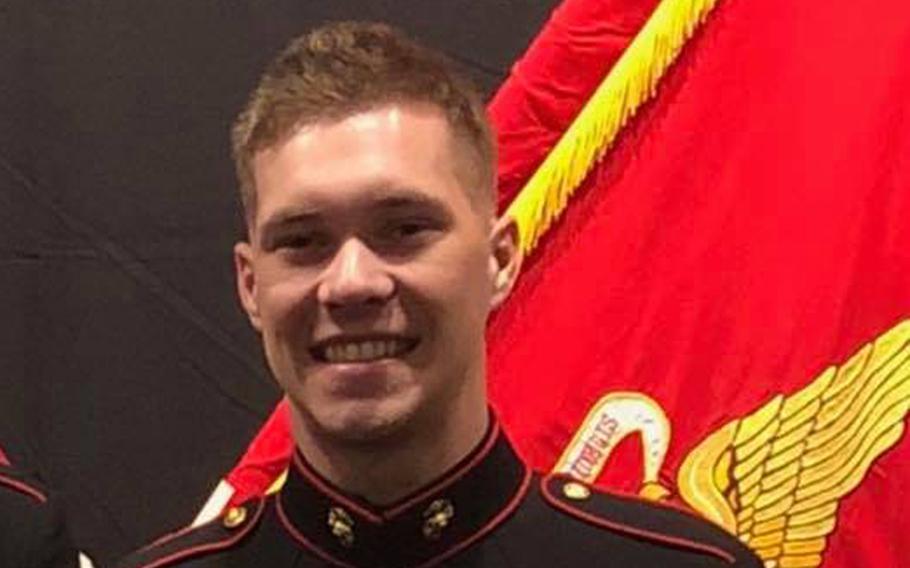 WASHINGTON — A Marine guard at the Marine Barracks Washington faces multiple charges including murder for shooting a fellow guard while on duty New Year’s Day, according to the Marine Corps.

Lance Cpl. Andrew M. Johnson is accused of pointing a pistol at the head of Lance Cpl. Riley S. Kuznia, 20, and “pulling the trigger in jest,” according to a charge sheet released Thursday by the Marine Corps.

Johnson was charged June 14 with dereliction of duty, murder-inherently dangerous act, involuntary manslaughter and negligent homicide. The investigation is still open and more charges could be filed, according to a statement from the Marine Barracks on Thursday.

“A complete and thorough investigation was conducted following this tragic incident,” Col. Donald Tomich, the commander of Marine Barracks Washington, said in the statement.

On New Year’s Eve, Johnson removed his pistol from its holster, put a bullet in the chamber and then stated, “Oh, you’re going to a party,” according to the charge sheet.

By pointing the pistol at Kuznia and pulling the trigger, the charge sheet states Johnson “knew that death or great bodily harm was a probable consequence of this inherently dangerous act.”

Johnson also was accused of being derelict in his duties by failing to follow firearm handling procedures on Nov. 25 when he removed “his pistol from the holster while dancing.” He is also accused of using his personal cell phone while on guard duty between November and the day of Kuznia’s death.

Johnson is not being held in pretrial confinement, Jeff Houston, a spokesman with the Naval Criminal Investigative Service, wrote Thursday in an email.

He is scheduled to appear at an Article 32 preliminary hearing Aug. 22 at Marine Corps Base Quantico, Va., according to the Marine Barracks statement. An Article 32 hearing is convened in the military to determine whether there is enough evidence to proceed with charges and could lead to a court-martial.

“The [Marine] Barracks remains committed to supporting Lance Cpl. Kuznia’s family as the legal process will undoubtedly reopen some wounds,” Tomich said in the statement. “Time does not ease the pain of their loss or make dealing with this any easier for them, and our thoughts and prayers remain with them.”

Marine Barracks Washington, D.C., is about a half-mile from the Washington Navy Yard and home to the Marine Corps Commandant. It hosts “Evening Parades” on Fridays throughout the summer, featuring the Marine Corps band, the service’s drum and bugle corps and its silent drill platoon.