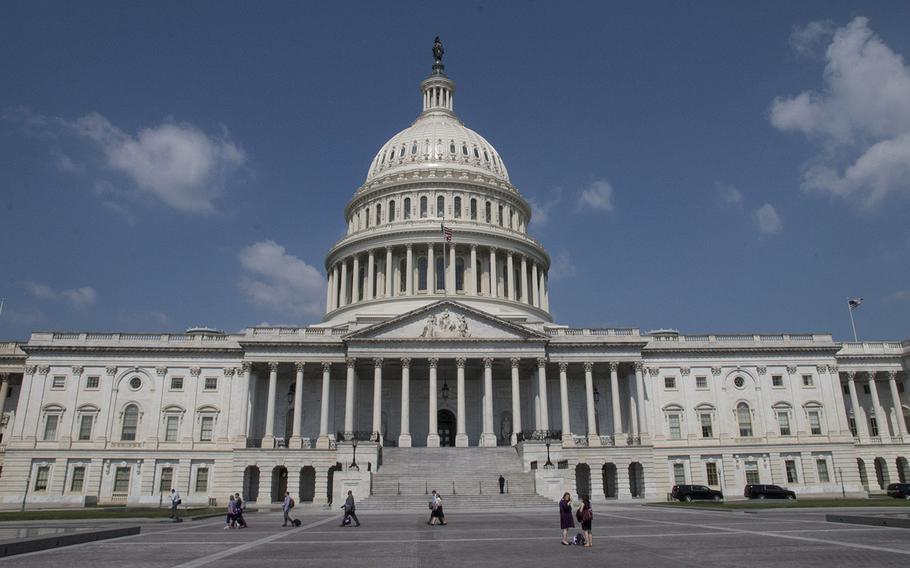 Buy Photo
Senate and House lawmakers behind a compromise proposed National Defense Authorization Act, or NDAA, unveiled Monday said it takes new steps to strengthen the U.S. military’s ability to challenge increased threats from Russia and China throughout the world. (Stars and Stripes)

WASHINGTON — Senate and House lawmakers behind a compromise of the defense policy plan unveiled Monday said the proposal takes new steps to strengthen the U.S. military’s ability to challenge increased threats from Russia and China throughout the world.

Lawmakers rolled out several provisions in the proposed National Defense Authorization Act, or NDAA, that extend the limitations on U.S. military cooperation, express a commitment to U.S.-NATO obligations and trigger the creation of a new post on the National Security Council to counter Russian interference with U.S. elections and its undermining of U.S. alliances.

The announced provisions follow a July 16 summit in Helsinki between President Donald Trump and Russian President Vladimir Putin that included a private meeting between the two leaders and a joint news conference. Details of the meeting have yet to be revealed publicly.

The $716 billion NDAA, or H.R. 5515, which directs policy and spending plans for the Defense Department, was set to go before the House Rules Committee on Tuesday before heading to the House floor for debate.

The NDAA installs provisions “to reassure allies and counter and deter Russian military aggression,” the House Armed Services Committee said in a joint statement detailing the efforts. It also strengthens U.S. policy against Russian military aggression and helps allies defend against it, while also limiting contact and assistance to Russia and force the country to comply with treaties it is breaching, the committee said.

The NDAA builds on last year’s package of Russia legislation, Smith said, along with the largest investment to date for the European Deterrence Initiative, which funds operations along NATO’s eastern flank.

“It restates of our commitment to NATO and our partners. It extends the prohibition on military cooperation with Russia. It declares that Russia violated the Chemical Weapons Convention,” an arms control treaty to prevent stockpiling of the weapons, he said. “It strengthens the prohibition on funding for activities that would recognize the sovereignty of Russia over Crimea. It requires a whole-of-government response to malign foreign-influence operations and campaigns, it improves our cyber and counter-influence infrastructure, and a good deal more.”

For example, lawmakers pointed to a new aircraft carrier and two new Virginia Class submarines that the Navy to challenge Russia more often around the world. The modernization of the nuclear triad was also singled out as a key to deterring Russia, the House committee said Tuesday in a summary of the plan.

It also authorizes 77 F-35 Joint Strike Fighters to, in part, counter Russian air and ground forces, the House panel said. It also prohibits the Defense Department from spending any funds on activities that would recognize Russian sovereignty over Crimea.

This year’s NDAA appears to build on momentum to grow the size and might of the military in response to China and Russia’s growing capabilities as outlined in the National Defense Strategy. In addition to Russia, the defense policy sets several provisions in motion to deter further aggression from China as well.

“The provisions on Russia aren’t new really, they just added some anti-Russia language, like pointing out that they’re the likeliest recipient of a U.S. nuclear strike and continuing this odd European Reassurance Initiative, which is what I thought NATO was,” Friedman said.

“The same goes for China. Calling for more strategies isn’t doing much of anything,” he added. “We already have defense policies oriented against China and particularly Russia. The toughening here is theatrical mostly. We ought to be less confrontational, not more in both cases, and ask more of our allies.”

The NDAA conference report, which is what Senate and House lawmakers agreed to Monday, requires a public report on the Chinese military and coercive activities in the South China Sea and elsewhere in the Indo-Pacific region. It extends the authority for the Maritime Security Initiative, a security-assistance program in the Asia-Pacific region, for an another 5 years, and requires the Secretary of Defense to submit a five-year plan for an “Indo-Pacific Stability Initiative,” a funding initiative to support allies in the region. The defense bill also supports implementation of the Nuclear Posture Review by authorizing $65 million to develop a low-yield, submarine-launched ballistic missile, directs the Army to acquire an interim, short-term capability to fill gaps in cruise missile defense, which is a critical to defend against Chinese and Russian threats, the Senate Armed Services Committee said.

NDAA also authorizes $235 million to procure deployable air base systems in the U.S. Pacific Command area of responsibility to support National Defense Strategy priorities as well as to enhance the combat power of U.S. forces in the Indo-Pacific region, the committee said. It also prohibits the federal government from doing business with entities that use telecommunication equipment or services by Chinese firms Huawei Technologies Company or ZTE Corporation, which have been accused of spying on the United States.

This, after lawmakers said Friday that they had stripped out of the bill a controversial measure that would reverse a White House effort to come to ZTE’s aid. While the measure had drawn bipartisan support on Capitol Hill, it was the target of staunch opposition from the White House, which had blocked a Commerce Department effort to impose stiff penalties on the company.

Now, a Republican move to strip a provision re-imposing those penalties could set the stage for renewed debate on the matter for both chambers in the coming weeks.

“They stripped out the big fines on ZTE that would have undercut Trump’s dodgy deal with China on the company,” Friedman said. “My take on ZTE is it’s a dangerous issue for Republicans to back Trump on an issue where he’s helping a Chinese company seemingly in exchange for help for his company.”