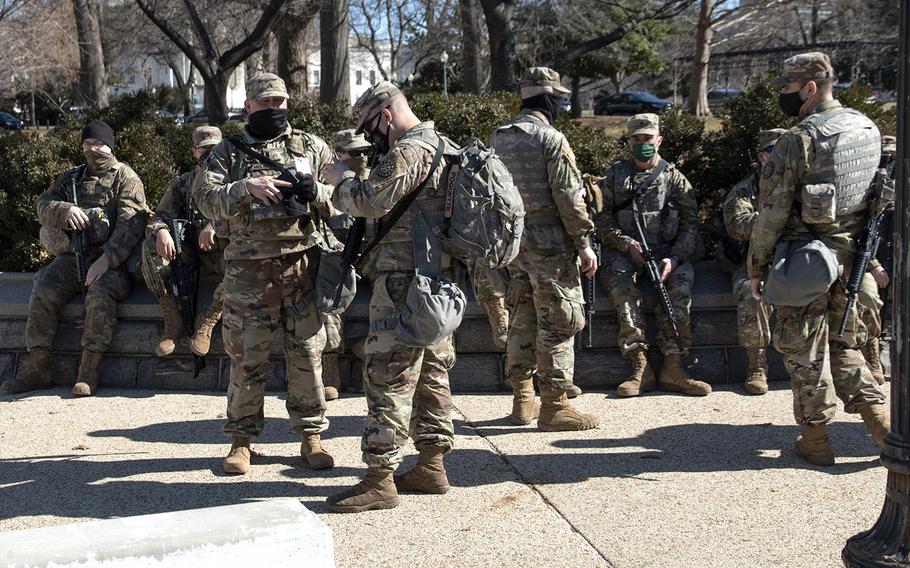 WASHINGTON — Some lawmakers on Thursday called for congressional briefings on possible threats to the Capitol following reports that police have requested an extension of the National Guard deployment in Washington.

“Before any extension for National Guard presence is finalized, lawmakers should be briefed on the latest intelligence threat assessments to determine the necessity of keeping our service members away from their families and full-time jobs,” Rep. Michael Waltz, R-Fla., a member of the House Armed Services Committee, said in a prepared statement. He said the Guard is needed for other missions such as coronavirus vaccine distribution and natural disaster deployments.

Waltz comments followed a report by The Associated Press that the Capitol Police have requested a 60-day extension of the Guard deployment that is scheduled to end March 12. The report came as the Capitol was on high alert after Capitol Police said Wednesday that it “obtained intelligence that shows a possible plot to breach the Capitol by an identified militia group on Thursday."

Yet some lawmakers slammed the possibility of keeping troops deployed in Washington.

“That’s not their function, that’s not their mission,” he said of the Guard troops. “They cannot do it. All of our employed people, all of the thousands of employers who would be forced to do something that they financially couldn’t do. It’s destroying careers of people. That’s not what they’re supposed to be.”

A defense official on Thursday acknowledged the Pentagon received the request from the police force, but said it was a “draft” and the details of the proposal have not been finalized.

A spokesperson for the Capitol Police did not immediately return a request Thursday seeking comment.

There are still about 5,200 National Guard troops in the nation’s capital who were called up to provide support to the Capitol Police in the response to the Jan. 6 riot. Following the riot, there were as many as 26,000 Guard troops in Washington.

Some lawmakers agreed with Waltz’s call for congressional briefings.

Rep. Elissa Slotkin, D-Mich., a member of the House Armed Services Committee, wrote on Twitter that Congress must be briefed about the extension request.

“It’s critical that members of Congress get a briefing on what’s behind these decisions,” she wrote Thursday. “We all have the same goal: to get back to the point where Capitol Police is capable of protecting us without the Guard’s help, and all parties feel confident we can protect the people’s business.”

But others thought extending the deployment might be needed.

House Speaker Nancy Pelosi, D-Calif., told reporters that the troops should stay at the Capitol "as long as they are needed.”

Pelosi directed retired Army Lt. Gen. Russel Honoré to lead a review of Capitol security in the wake of the deadly Jan. 6 attack.

Sen. Roy Blunt of Missouri, the ranking Republican of the Senate Rules Committee, told Capitol Hill pool reporters that he had spoken to Honoré who suggested keeping troops in the area “quite a while longer” than two months, similar to what he claimed was the security plan after the 9/11 terrorist attacks.

“I do think that some active military police Guard in a more permanent basis near the Capitol could be a good idea for the foreseeable future, principally because they would actually be able to relieve the Capitol Police for some of their duties,” Blunt said.

“Yes, eventually you want to do that,” Klobuchar told a reporter in response to a question about drawing down troops in Washington. “But you want to listen to the law enforcement intelligence about what is safe.”