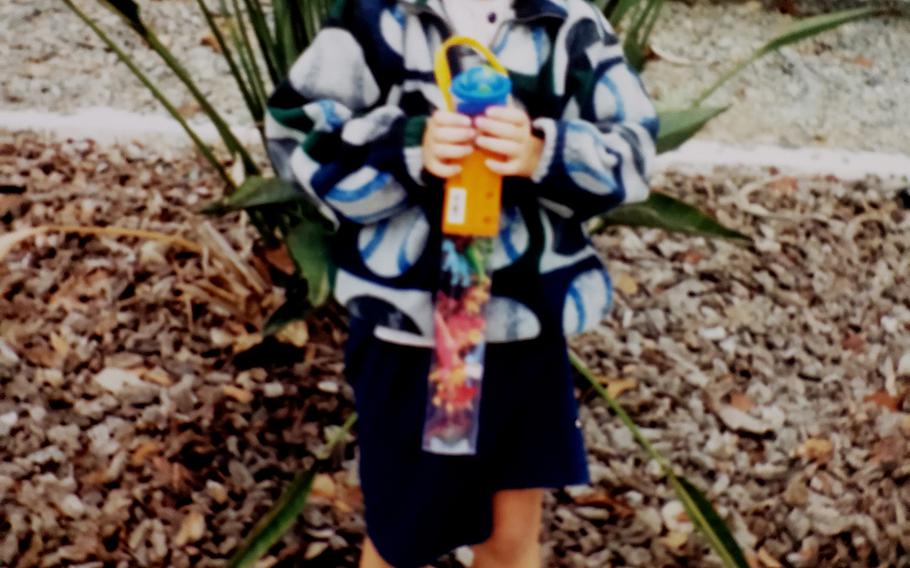 Brandon Caserta, a sailor who died by suicide in 2018, shown here at age 3. Caserta's parents, Patrick and Teri, have lobbied for legislation to improve the military's mental health services and offer methods to hold leadership accountable. (Patrick and Teri Caserta)

Brandon Caserta, a sailor who died by suicide in 2018, shown here at age 3. Caserta's parents, Patrick and Teri, have lobbied for legislation to improve the military's mental health services and offer methods to hold leadership accountable. (Patrick and Teri Caserta) Brandon Caserta, a member of Helicopter Sea Combat Squadron 28 in Norfolk, Va., shown here during his senior year of high school. Caserta died by suicide on June 25, 2018, and a command investigation later determined that "brash leadership" contributed to his death. (Patrick and Teri Caserta) Brandon Caserta, an aircrew aviation electrician's mate striker in Norflolk, Va., died by suicide June 25, 2018, at age 21. The command investigation into his death found that "belligerence, vulgarity and brash leadership" contributed to Caserta's decision to end his own life. (Patrick and Teri Caserta)

WASHINGTON — Over the past two years, Patrick and Teri Caserta have tried to create a positive legacy for their son, a 21-year-old sailor who died by suicide June 25, 2018, after throwing himself into the spinning tail rotor of a MH-60s helicopter at Naval Station Norfolk, Va.

A command investigation into Brandon Caserta’s death determined that belligerent and brash leadership of Helicopter Sea Combat Squadron 28 contributed to his decision to end his own life. He felt alone, stuck and afraid of retaliation, his parents said.

After fighting the Navy for accountability and urging Congress to make changes, the Casertas are finally seeing progress.

On Thursday, the two-year anniversary of Brandon Caserta’s death, Rep. Seth Moulton, D-Mass., introduced a bill in his name: the Brandon Act. The underlying goal is to create a pathway for service members to seek mental health care in confidence, without disclosing it to their command. It would create a safe word that, when said, would trigger an immediate, confidential mental health evaluation.

“Brandon tasked us with doing something like this, in his final letter to us,” Teri Caserta said. “Brandon’s legacy is to save lives. The rest of our lives will be focused on that, too.”

Fighting for changeThe suicide note from their son prompted the Casertas to seek the help of Congress. They were novices at lobbying and unaware of what went into creating a bill, but they set out on a cross-country road trip from their home in Peoria, Ariz., to Washington to give it a try.

For one week last year, they walked through the Senate and House office buildings, meeting with any lawmaker or staff member they could. They told the story of their son and what stood in his way of getting help. He feared retaliation from his command.

Sen. Kirstin Gillibrand, D-N.Y., was one of those lawmakers. She brought up Caserta’s case during a Senate Armed Services Committee hearing in December that focused on suicide prevention. At the time, she urged military leaders to alter a policy that requires mental health professionals to report many service members’ mental health concerns to a commander, arguing it “creates mistrust and acts as a barrier to treatment.”

“Brandon Caserta felt so unhappy and felt so hopeless,” Gillibrand said during the hearing. “He faced personal setbacks, combined with daily abuse from his superiors and little hope that anything would change.”

In response, Capt. Michael Colston, director for mental health programs in the Pentagon’s health services policy and oversight office, said the Navy has a zero-tolerance policy for hazing and bullying and “to the extent they happen, they’re leadership failures.”

It was a small but powerful moment for the Casertas — the first time anyone in the Navy had admitted failure regarding their son’s case.

A more powerful moment came Wednesday, when they learned the Brandon Act would be introduced. Work on the bill had been delayed during the coronavirus pandemic, and the Casertas weren’t expecting legislation until later in 2020.

“We were shocked,” Patrick Caserta said over the phone Thursday morning. “It’s a great start in the right direction. We believe it meets the criteria to help people immediately.”

The Brandon Act creates a system modeled off the process available to victims of sexual assault, which would allow serve members who experience mental health issues to receive care without notifying their command or opening an official investigation of any allegations they raise. The Casertas believe the change would help reduce the perceived barriers of self-reporting for mental health evaluations and ease service members’ path to care.

It was uncertain Thursday whether the Senate would follow with its own version of the bill. The Casertas have been in talks with several senators, including Gillibrand and Sen. Tim Kaine, D-Va.

A summary of the House bill, shared by Moulton’s office, says Brandon Caserta tried to find help “but was unable to get the treatment he wanted.”

"This bill will ensure our service members can get help and have no fear of retaliation for doing so as it’s the right thing to do," Moulton said Thursday. "Although we’ll never get Brandon back, his legacy will be the lives of many more great Americans he saves through this bill, and I’m proud of his parents who have fought so hard to tell his story and make this change."

Troubling leadershipBrandon Caserta — described by his parents as a friendly and caring person who always looked out for his friends — joined the military after high school. Patrick Caserta, who had a 22-year Navy career, unsuccessfully advised him against it.

“He wanted to be a SEAL,” Patrick Caserta said. “He was so adamant about it… there was nothing we could do. It was the right thing to support him.”

Caserta, though, had to drop out of special warfare training after he broke his tibia in SEAL school.

While in Norfolk, where he was an aircrew aviation electrician’s mate striker, Caserta was under the command of a lead petty officer who demeaned him and other members of his unit and frequently cursed at them.

Despite the toxic leadership, Caserta’s evaluation reports indicate he was a “proven self-starter” who required minimal supervision and consistently strove to achieve personal goals.

“Airman Caserta is a dedicated individual who shows great ability and initiative,” one of his evaluations from 2017 reads. “Highly recommended for retention and advancement.”

Caserta wanted out of his command, but another injury — a broken collar bone — blocked his efforts to be designated an aircrewman and make a transfer. On June 22, 2018, Caserta was recommended to a disciplinary review board over an argument about whether he had a driver’s license and could operate vehicles on the flight line.

His parents believe the factors all compounded to make Caserta feel trapped.

Brandon Caserta wrote several notes before his suicide, in which he criticized the Navy and the command of Helicopter Sea Combat Squadron 28. In a letter to his parents, he asked them to expose the problems with the unit and hold the wrongdoers accountable.

On June 25, 2018, Caserta went to the flight line at Naval Station Norfolk and yelled an apology to the onooking plane captain before jumping into the spinning rotor. Emergency responders declared him dead at the scene.

A command investigation, shared with Stars and Stripes, determined that “belligerence, vulgarity and brash leadership was likely a significant contributing factor” in Caserta’s decision to end his life. His leading officer – whose name is redacted from the report – was verbally abusive, demeaning and created a hostile working environment, the investigation found.

On June 27, 2018, two days after his death, Caserta’s lead petty officer made derogatory remarks about him. Patrick Caserta said they’d been told the LPO had bragged about driving Caserta to suicide. A counseling record shows that the LPO was transferred June 28. However, the record notes that the move was “not punitive” and was going to happen anyway.

In November of that year, squadron commander Duane Whitmer wrote that the lead petty officer “has been removed from his leadership position and will be held accountable for his actions.”

“While I do not believe there is any single driving force that led to the suicide, I do believe that findings concerning the work center’s leading petty officer at the time of the incident are both troubling and valid,” Whitmer wrote.

Patrick and Teri Caserta believe there was no true accountability.

While they push to get the Brandon Act through Congress, the Casertas plan to keep fighting for justice for their son, too.

“We’re determined to get justice for him, but we realize it’s against all odds,” Patrick Caserta said. “That’s going to be a battle we’re going to have to continue to fight, and we’re prepared to do that.”