Judge will not limit Bergdahl's sentence over Trump comments 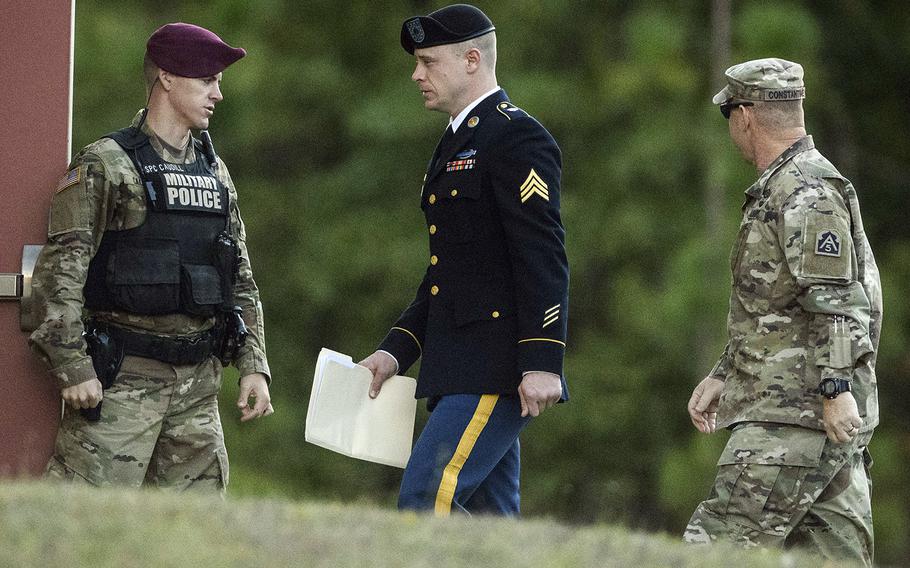 The judge, Army Col. Jeffery R. Nance, ruled Trump’s Oct. 16 comment endorsed the negative comments that he repeated along the campaign trail but ultimately did not interfere with Bergdahl’s ability to receive a fair sentence. Nance determined Army officials involved in the case — including himself — were not swayed by them. However, the judge said he would consider the president’s comments as “mitigating evidence” as he determines “an appropriate sentence in this case.”

“I am the sole sentencing authority in this case,” Nance said on the third day of Bergdahl’s sentence hearing at Fort Bragg. “I am completely unaffected by any opinions President Trump may have about Sgt. Bergdahl.”

The 31-year-old soldier has pleaded guilty to desertion and misbehavior before the enemy charges, admitting he endangered his follow troops when he walked of Observation Post Mest in Paktika province, Afghanistan in June 2009.

Defense attorneys had initially sought dismissal of Bergdahl’s court-martial when they filed a motion Oct. 17, arguing Trump’s statement the day before endorsed his campaign trail comments about the soldier and amounted to unlawful command influence. But last week, they instead asked Nance to limit Bergdahl’s maximum punishment to no punishment or at least no confinement.

Nance on Monday described some 60 comments that Trump, then a presidential candidate, made about Bergdahl as “conclusory, condemning and disparaging.” But he declined to cap Bergdahl’s sentence, ruling an impartial, disinterested observer would not believe the president’s comments had interfered in the case. Trump on several occasions referred to Bergdahl as a “dirty, rotten traitor” and opined the soldier should be shot or returned to the Taliban. He also promised his supporters that he would review the case himself if he was elected and Bergdahl went unpunished.

On Oct. 16, Trump was asked about Bergdahl’s case by a reporter and said: “I think people have heard my comments in the past.” It was the first time that Trump as president had mentioned the soldier publicly.

Nance, who is set to retire in November 2018 and ineligible for promotion, said he was not influenced by Trump’s comments and was convinced other Army officials involved in the case were not either.

The judge is scheduled to sentence Bergdahl this week following defense witness testimony expected to outline Bergdahl’s mental health problems and the extensive torture that he faced from Taliban-linked captors.

The judge’s ruling Monday came just before two witnesses detailed the extensive recovery and care for retired Army Master Sgt. Mark Allen, a Georgia Army National Guard soldier who was left paralyzed and unable to speak after he was shot in the head on a mission to collect information about Bergdahl’s possible whereabouts days after his disappearance eight years ago.

His wife, Shannon Allen, testified Monday that her husband has had 12 to 15 surgeries and never regained the ability to move or speak. His surgeries included the removal of portions of his brain. Her husband’s condition has left her as more of a caretaker than as a wife.

“We can’t even hold hands anymore unless I pry open his hand and place mine in there,” Shannon Allen said, fighting back tears.