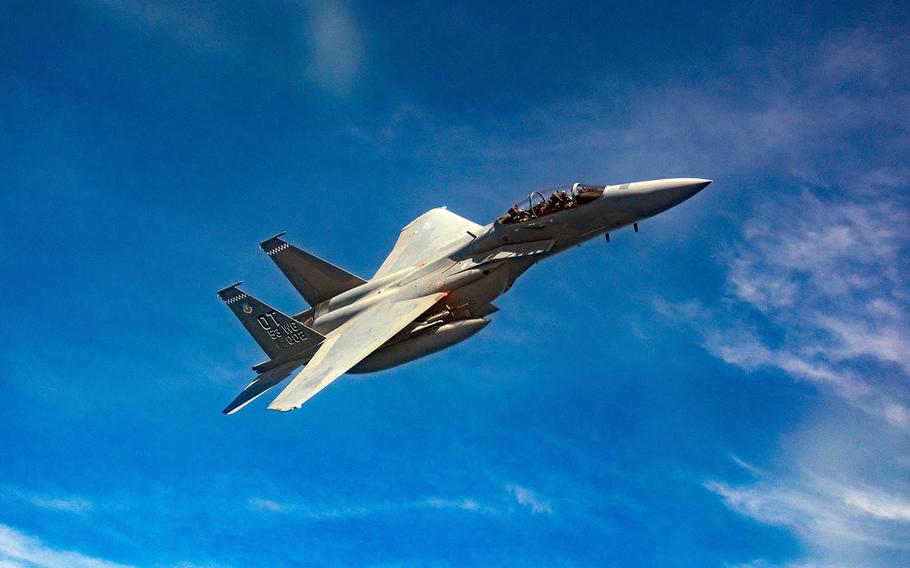 An F-15EX Eagle II flies for the first time out of Eglin Air Force Base, Fla., April 26, 2021, prior to departure for the Northern Edge exercise in Alaska. (Savanah Bray/U.S. Air Force)

The massive Northern Edge joint exercise kicked off Monday in Alaska, bringing together about 15,000 U.S. airmen, sailors, Marines and soldiers and 240 ships and aircraft, including the Air Force’s newly upgraded fighter, the F-15EX Eagle ll.

The two-week field training spans the vast state and the ocean waters near it, with troops concentrated in the Joint Pacific Alaska Range Complex and the Gulf of Alaska.

The 53rd Wing at Eglin Air Force Base, Fla., will be conducting operational tests of the F-15EX fighter jet, which features upgraded computing, sensors and weapons. Northern Edge will be the “first look at large force integration” for the new jet, including with fifth-generation F-35 stealth fighters, the Air Force said in a news release Thursday.

The exercise comes on the heels of the public release in March of the Army’s Arctic strategy, the end goal of which is to train and equip soldiers to operate and fight in extreme cold for extended periods with minimal outside support.

Northern Edge is a chance for the joint force to “put all of the pieces of the puzzle together for the big picture and allow our younger generations in the armed services to experience what future conflict could feel like and the complexities associated with it,” Air Force Lt. Col. Mike Boyer, lead planner for the Indo-Pacific Command exercise, told reporters during a March 31 conference call.

“Typically training happens within units in their own services, so an Air Force squadron will train with other Air Force squadrons either at its regional base or somewhere nearby,” Boyer said. “But you never really get the volume or complexity that you would expect to see in a modern-day conflict.”

The exercise is intended to increase the nation’s combat readiness and the ability for the four services to work together in an actual conflict.

It is an opportunity to experiment with joint-force concepts now being implemented by the various services, Boyer said.

Among the concepts being refined are the Air Force’s agile combat employment, which uses a hub-and-spoke network that allows airmen to deploy and maneuver more rapidly; the Defense Department’s joint all-domain command and control, the goal of which is to connect all sensors within the armed forces into a single network; and the all-domain operation centers, which the Army is developing to support the DOD command-and-control concept.

“Integrate all the way,” Boyer said. “It’s what we’ve been working on for the last year.”

Boyer declined to talk to reporters about specific training scenarios, but he said they reflect in part real-world current events.

“The scenarios that we do build account for any modern capabilities potential adversaries will have out there,” Boyer said. “You need to put together the big picture. Alaska is really the premier spot that allows INDOPACOM’s joint force and other elements of our forces in the continental United States to come up to Alaska and test out tactics that give us the competitive and the deterrent edge in modern warfare.”

Soldiers from the 17th Field Artillery Brigade at Joint Base Lewis-McChord are also joining the drills.