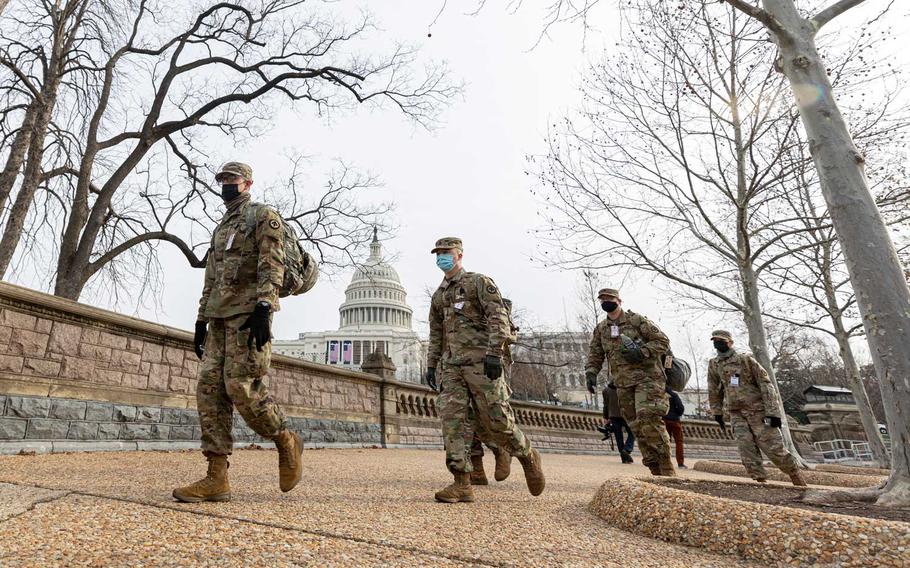 U.S. Soldiers with the New Jersey National Guard patrol the area near the Capitol building in Washington, D.C., Jan 11, 2021. A memo, sent to the entire military and signed by all eight members of Joint Chiefs of Staff reiterates to the force that the U.S. military will obey lawful orders from civilian leadership and “remains fully committed” to protecting and defending the Constitution. (Matt Hecht/U.S. Air National Guard )

WASHINGTON — The senior officers of the Joint Chiefs of Staff condemned the deadly riot at the Capitol last week, saying it was a “direct assault” on the constitutional process and illegal, according to a memo sent to the entire military.

“We witnessed actions inside the Capitol building that were inconsistent with the rule of law. The rights of freedom of speech and assembly do not give anyone the right to resort to violence, sedition and insurrection,” according to the one-page undated memorandum.

The document, signed by all eight members of Joint Chiefs of Staff including its chairman, Army Gen. Mark Milley, reiterates to the force that the U.S. military will obey lawful orders from civilian leadership and “remains fully committed” to protecting and defending the Constitution.

“Any act to disrupt the constitutional process is not only against our traditions, values, and oath; it is against the law,” the memo reads.

The FBI said Tuesday that it had opened more than 160 criminal cases as a result of the Capitol riot, and 70 people had been charged so far. The FBI is combing through more than 100,000 videos and other digital media of the attacks and is expecting hundreds of people to be identified and charged.

"Even if you left D.C., agents from our local field offices will be knocking on your door if we find out that you were part of the criminal activity at the Capitol," Steven D'Antuono, assistant director in charge of the FBI's field office in Washington, said Tuesday afternoon during a news conference.

The march on the Capitol on Jan. 6 by some supporters of President Donald Trump followed his speech that reiterated claims of a stolen election to the crowd at a rally outside the White House. A mob of supporters attacked police and broke into the Capitol building and vandalized it, and sent congressional lawmakers into lockdown. The riot delayed Congress from the official certification of President-elect Joe Biden’s Electoral College victory, but lawmakers returned hours later and approved the election results.

The Joint Staff’s memo stated Biden will be the next president and commander in chief.

“On January 20, 2021, in accordance with the Constitution, confirmed by the states and the courts, and certified by Congress, President-elect Biden will be inaugurated and will become our 46th commander in chief,” memo reads.

The House on Monday announced an article of impeachment against Trump for “incitement of insurrection” with his false claims about the election results and making statements Jan. 6 before a crowd that “in context, encouraged—and foreseeably resulted in — lawless action at the Capitol,” according to the bill.

Representatives will be begin debating the bill Wednesday, just one week after the riot.