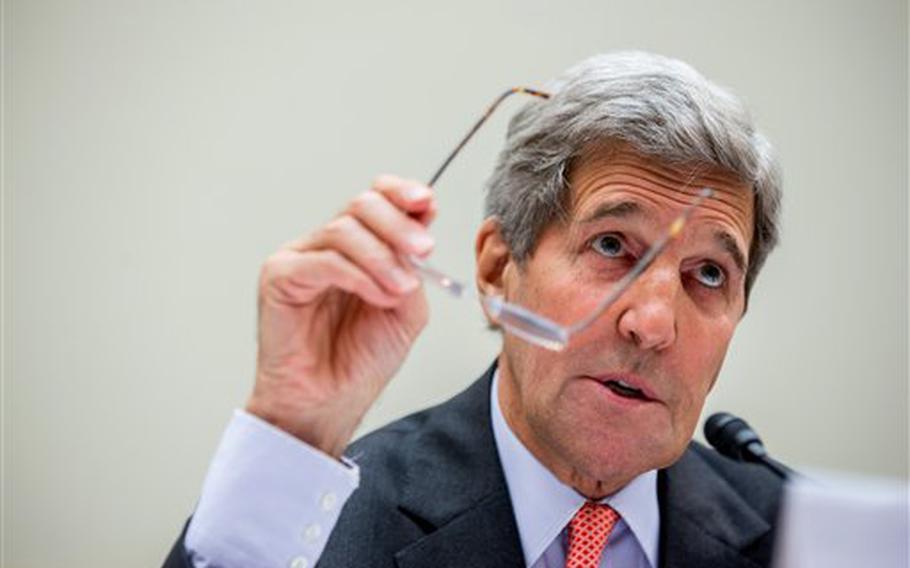 Secretary of State John Kerry testifies on Capitol Hill in Washington, Tuesday, July 28, 2015, before the House Foreign Affairs Committee hearing on the Iran Nuclear Agreement. Kerry pitched the administration's controversial nuclear deal with Iran to a skeptical House Foreign Affairs Committee on Tuesday, pushing back against the allegation it would ease crippling sanctions forever in exchange for temporary concessions on weapons development. (Andrew Harnik/AP)

Obama, his Cabinet and other allies are making the case that the deal, which calls on Iran to curb its nuclear program in exchange for billions of dollars in sanctions relief, is the best possible way to prevent Tehran from developing a nuclear weapon.

Secretary of State John Kerry, Defense Secretary Ash Carter and Army Gen. Martin Dempsey, the chairman of the Joint Chiefs of Staff, are scheduled to testify on Wednesday before the Senate Armed Services Committee along with Energy Secretary Ernest Moniz.

Nicholas Burns, former undersecretary of state for political affairs and ambassador to NATO, will meet with House Democrats at the invitation of Minority Leader Nancy Pelosi, D-Calif., who is leading the effort to round up Democratic support for the deal. House Democrats also were scheduled to meet with Obama at the White House later in the day.

"I believe that Israel, the region, and the world are far more secure if Iran does not move toward possession of a nuclear weapon," longtime Rep. Sander Levin, D-Mich., said in a statement that referenced his Jewish faith.

On the other side is the powerful American Israel Public Affairs Committee, which is spending millions of dollars on ads to convince lawmakers that Iran can't be trusted and the deal should be scuttled. Its members were personally pressing the argument in meetings on Capitol Hill.

"We flew in this morning from Miami," Stephen Fiske, one of hundreds of AIPAC activists in Washington this week, said as he headed toward a lawmaker's office. "We have a few meetings today and we have 13 tomorrow."

Lawmakers from Fiske's home state, Florida, along with the New York delegation, are considered among the top lobbying targets in Congress, according to interviews with lawmakers, their aides and activists.

Congress has begun a 60-day review of the international agreement, with a vote expected in September. If the Republican-controlled Congress passes a resolution of disapproval for the deal, Obama has said he will veto it. The administration is hoping to secure the backing of Democrats to sustain the veto.

As the hearing entered its third hour, Rep. Scott Perry, R-Pa., told the trio that the deal would embolden Iran, which is already involved in activities that destabilize the region.

"Well, we're going to give the crocodile, or the shark, a few more teeth and let's just see if it does something different," said Perry, who thinks the administration needs to negotiate a better deal. He went on, asking Kerry whether he cared about what the American people, through their congressional representatives, thought about the agreement.

Kerry lashed back: "Congressman, I don't need any lessons from you about who I represent. I've represented and fought for our country since I was out of college. ... Don't give me any lessons about that, OK? Now, let me just make it crystal clear to you. This is America's interest. ... Now, we believe that Iran was marching towards a weapon or the capacity to have a weapon, and we've rolled that back, congressman."

Kerry warned the committee members against nixing the deal, insisting that it includes strict inspections and other safeguards to deter Tehran from cheating.

Kerry was asked what would prevent Iran from temporarily adhering to the agreement, then taking the money from the sanctions relief and rushing to build an atomic bomb. If Iran tries to develop a nuclear weapon covertly, the international community will know, Kerry told the panel.

"The red flags that would go off — the bells and whistles that would start chiming — as a result of any movement away from what they have to do" under the agreement, Kerry said.