In his final night, Army veteran celebrated his birthday with two soldiers now charged in his death 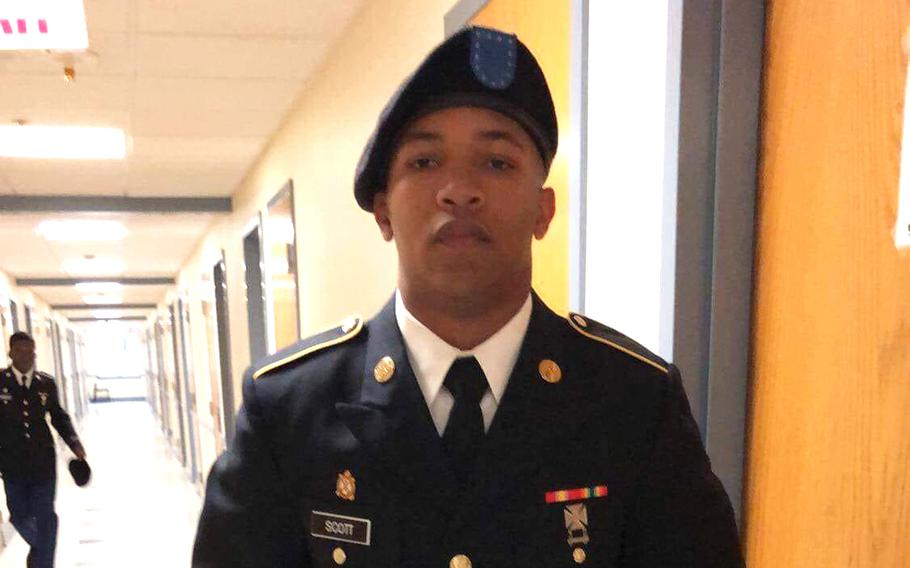 As Army veteran Leroy Joseph Scott III planned his 20th birthday party in Ellensburg, Wash., the invitations included one of the men now charged in his death.

Though Army Pvt. Joshua Gerald initially denied he was invited or attended the gathering, other people interviewed by detectives with the Kittitas County Sheriff’s Office stated otherwise, according to police records.

Police also said they have a video of the party that shows Gerald in attendance — wearing the same pants he later wore to an interview with investigators who were trying to determine how Scott’s birthday celebration April 24 ended with his badly beaten body left on the side of a rural road 10 miles outside of town.

Results of an autopsy conducted to determine the exact cause of death have yet to be released, because the investigation remains ongoing, police said.

Five days after Scott’s body was found, Gerald was charged with first-degree murder and Pvt. Raylin D. James with rendering criminal assistance in the first degree. Both served with Scott in the 555th Engineer Brigade at Joint Base Lewis-McChord and were arrested without incident in Pierce County, where the base is located.

Scott left the Army in December as a private, last serving at the joint base, which is located about 130 miles from Ellensburg.

James and Gerald, both 20, attended Scott’s party, which was held at the apartment of Scott’s friend Hadassah Fisch, whose 20th birthday was the following day.

Fisch also was arrested on a criminal assistance charge and all three remained at the Kittitas County Corrections Center on Thursday, according to online jail records.

James told detectives that Gerald, Fisch and Scott all left the apartment together, but Scott did not return, according to a police report. He also said Scott “had fingered both he and Gerald for a drug incident” in November or December and “he didn’t believe as of a couple months ago that Gerald was over what happened between them,” the report states.

During Gerald’s interview, detectives confiscated Gerald’s red shoes that appeared to have blood on them, and observed his hands had bruising and scabs, according to the report.

Gerald denied that the video of him was taken in Ellensburg, but did not deny that following the party he had the keys to Scott’s vehicle, which he drove and left along Interstate 90.

Carter, who serves at Fort Benning, Ga., had reconnected with his nephew last year hoping to help the young private get back on track as he faced disciplinary action for a pattern of misconduct. Known to his family as “Trey,” Scott ultimately received an other-than-honorable discharge in December, but chose to remain in the area around the joint base.

Some behavior that led to the discharge included an unauthorized guest in the barracks on multiple occasions, Carter said. An administrative discharge is used in the military to release service members for disciplinary reasons that don’t require a court-martial but can block them from most benefits as a veteran.

“He understood what he did was wrong. It wasn’t a violent thing or he wasn’t doing drugs, it was kid things,” Carter said, adding he would not have advocated on behalf of his nephew had his discipline problems been related to drugs. “In talking to Trey, his whole focus was, ‘I can’t go back home.’ He really wanted to stay in the Army.”

Carter said he continued to mentor Scott as he took a job at a fast-food restaurant, often asking him about his goals and what he needed to do to achieve them. Scott was considering college and was also an aspiring rapper.

Growing up in the outskirts of New Orleans made Scott “rough around the edges, but a happy kid,” Carter said. “He was goal oriented and had a happy outlook on life.”

Scott joined the Army in May 2018 as a wheeled vehicle mechanic, not to make a career of it, but to “get his foot in the door as an adult,” Carter said. Throughout school, Scott played football and had a natural talent and drive toward fitness.

The Army was a chance to step out on his own but with structure to allow him to mature before pursuing his true passions of sports and music, Carter said.

Following his discharge, Scott expressed his disappointment to his family, but was trying to get his life on track by working and saving money, Carter said.

Though, in one of their last phone conversations, he said he had warned Scott to “be careful with the company that he keeps.” It was a lesson that Carter said he had to learn as a young soldier.

Carter said the family is upset over Scott’s death, but trying to focus on the good that he brought to the world – even if just for a short time.

“That’s how we are raised in New Orleans. We celebrate life and we celebrate death,” he said. “It’s what you accomplished in those few years. He did a lot.”

The two soldiers charged in Scott’s death are due in court May 18, said Sgt. Zach Green of the Kittitas County Sheriff’s Office.

“The wheels of justice turn slow, but I do appreciate that police department. They did their due diligence and they did it quickly,” Carter said, adding he hopes for a speedy trial or a guilty plea that will end the legal process quickly and allow the family to know how and why this happened.

“It’s just to get that release and that understanding,” he said. “It’s not going to make it better, but I can come to terms with it.”