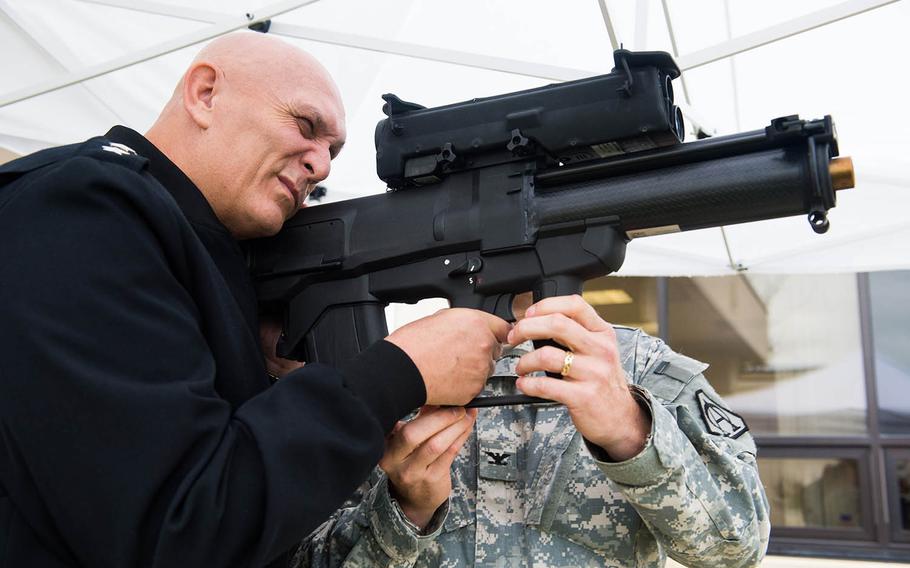 SAN ANTONIO — The Pentagon’s internal watchdog has asked the Army to move forward or cancel its grenade airburst weapon after lengthy delays and malfunctions have stalled development, according to a report issued this week.

The XM25, heralded by its developers as a combat game changer, has experienced a five-year production delay since 2012, the Department of Defense Inspector General report said, adding that an internal Army council needs to make a production document available to move forward if testing that wraps in November shows the weapon has improved in design.

Tests were halted in 2013 after an operator was injured in Afghanistan, the report said. One of the rounds prematurely ignited, giving the soldier superficial injuries. The incident forced the Army to pull all the weapons from the combat theater, Foreign Policy reported.

The Pentagon internal review said no malfunctions have been reported since design overhauls were implemented after the incident, but no production milestones has been made since 2010.

The XM25 is an airburst weapon designed to target combatants hiding in defilade, or taking cover behind walls or inside buildings, trenches or bunkers where traditional small arms cannot easily reach targets. The weapon calculates a distance to the threat and programs the 25 mm round to explode midair above the target at an effective range of 500 meters — more than triple the effective range for the M203 grenade launcher.

Initial combat field tests produced mix results in Afghanistan between 2010 and 2013. Three operators of the weapon received minor wounds from malfunctions, though the IG report suggests inadequate training as the reason injuries might have occurred.

“The XM25 is a devastating weapons system that changes the face of battle when we are in direct fire contact with the enemy,” he told Army.mil in 2012.

An Army Ranger unit was less enthusiastic. After an initial assessment, troops refused to take the bulky weapon on a raid, saying it and its ammunition was too cumbersome to leave behind a primary weapon, like an M4 rifle, Military.com reported in 2013.

The Ranger assessment points to an age-old preference for ground troops to carry weapons that balance weight, effectiveness and simplicity. The military’s primary grenade-firing platform, the M203 launcher, has been used since the Vietnam War and attaches underneath the M4 rifle, providing two weapons in one with an additional three pounds.

“The M203 is simple. You’re not carrying extra stuff with you that slows you down and gets stuck on doors and in vehicles,” said Victor Londoño, an Army infantry veteran who used the M203 in Iraq. Though he never used the XM25 in combat, Londoño said he is not surprised to hear that Rangers left the weapon behind due to its size and weight constraints.

“The simpler the better in combat,” Londoño said.

The Army has begun phasing out the M203 in favor of the M320, a detachable replacement that fires the same rounds. Other branches, including the Marine Corps, will keep the M203 in their inventory.

Some parts of the Pentagon’s IG assessment have been redacted, including fielding costs for the XM25.

The future costs, also redacted, “could be put to better use” if the program is canceled, the report said. The Army requested nearly $10 million in funding for the XM25 next year, with a total of $107.6 million through 2021—an investment that could indicate the Army’s preference to ultimately field the weapon.