If you're tired take a nap, according to new Army field manual focused on holistic health 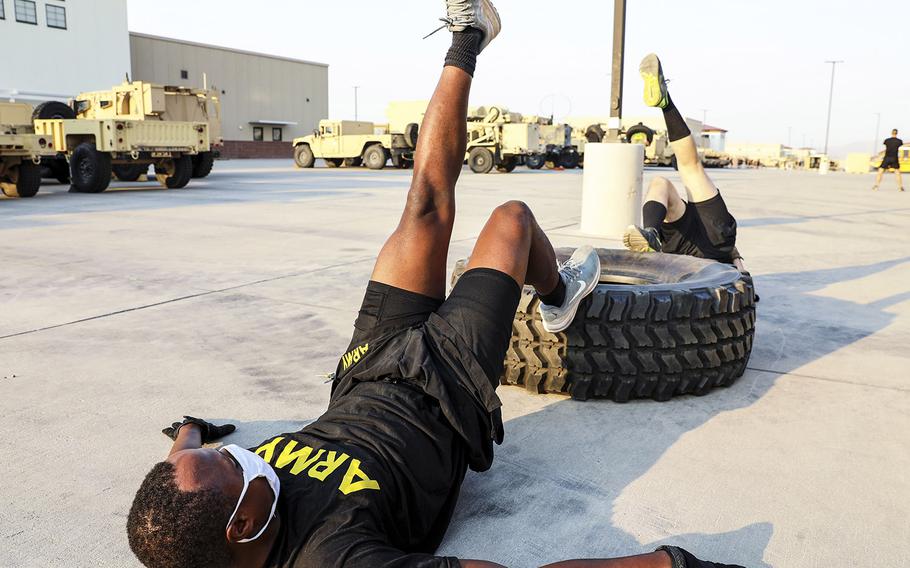 WASHINGTON — The Army on Thursday released its new field manual, and has officially embraced an afternoon snooze for tired soldiers unable to maintain full nights of sleep during training exercises or other operations.

Entitled Holistic Health and Fitness, FM-22 outlines coming changes to how the Army intends to use more holistic health approaches to help improve a soldier’s performance.

The update is the first revamp of the service’s health and fitness approach since 2012, and it intends to build more resilient, healthy soldiers by concentrating on their individual wellness instead of the service’s decades-old focus on the health of whole units.

“We’ve made leaps and strides, by not looking at soldiers as carbon copies of one another, but as individuals. That’s the point of Health and Holistic Fitness,” said Maj. Gen. Lonnie Hibbard, the commander of the Army’s Center for Initial Military Training, which spearheaded the service’s health reform efforts outlined in the new field manual.

It “optimizes a soldier’s readiness, reduces injury rates, improves rehabilitation after injury, and increases the overall effectiveness of the total Army,” he said.

The decision to revamp how the Army approaches soldier wellness was driven by troubling statistics that show high rates of injuries and other health issues that have limited tens of thousands of soldiers from fully performing their jobs. Army statistics show more than 58,000 soldiers as of April were characterized as nondeployable, the equivalent of about 13 brigade combat teams.

Among those soldiers, about 15,000 were considered permanently nondeployable. The same data showed roughly 53% of American soldiers reported suffering a new injury in 2018. Of those injuries, some 71% were diagnosed as preventable musculoskeletal injuries from overuse, according to Army documents.

Holistic Health and Fitness, dubbed H2F by the Army, aims to fix some of those longstanding challenges by encouraging soldiers to adopt physical fitness routines tailored to improving their strength and their ability to recover quickly. Hibbard said the system will go hand-in-hand with the Army’s new fitness assessment, the six-event Army Combat Fitness Test that Thursday replaced the decades-old Army Physical Fitness Test as the service’s official fitness evaluation.

For example, the Army intends to move away from its longstanding, hourlong early morning unit physical training sessions when everyone does the same routine to fitness training regimens tailored specifically to an individual.

“This will require physical training to occur throughout the duty day, not just during a one-hour period in the early morning,” said Megan Reed, a spokeswoman for the Center for Initial Military Training at Fort Eustis, Va.

But the new field manual also makes clear to soldiers that other health aspects, such as nutrition, mental wellness and sleep are equally as important as physical fitness to their ability to perform their duties. Without sleep, the field manual reads, soldiers steadily lose cognitive clarity, which could lead to poor decision-making or hampered reaction times in the field.

“To achieve optimal readiness, soldiers must have sleep and the more sleep obtained the better. Inadequate sleep weakens soldier performance and jeopardizes the mission,” the field manual states. “… In short, sleep makes soldiers better at being soldiers.”

The field manual calls for soldiers to get between seven and nine hours of sleep in every 24 hours, but it does not postulate on the minimum amount of sleep soldiers can rely on and maintain “military effectiveness.” However, the manual does state soldiers do not acclimate to a lack of sleep, and, therefore, must make up for lost rest hours at some point.

“The notion that one can adapt to sleep loss is a myth," FM-22 reads. "Although soldiers generally benefit from training as they fight, this does not hold true for sleep loss. Soldiers cannot be trained to perform better on less sleep."

That is where officially authorized naps in some circumstances fit in, officials said. Naps while in the field — on deployments or during long exercises at places like the Army’s three combat training centers — have long been customary for tired soldiers during periods of downtime. Now, commanders are authorized to allow soldiers to nap when their over-tiredness could become risky.

“When regular nighttime sleep is not possible due to mission requirements, soldiers can use short, infrequent naps to restore wakefulness and promote performance,” according to the manual. “When routinely available sleep time is difficult to predict, soldiers might take the longest nap possible as frequently as time is available. During periods of restricted sleep (six hours of sleep or less per night), napping combined with appropriate doses of [about 200 mg of] caffeine may help to sustain cognitive performance and alertness.”

The new guidance is meant explicitly for soldiers to catch up on needed sleep while “conducting training and operations,” Reed said.

That means, soldiers should not expect to be authorized naps while on-duty to make up for sleep lost during a night of drinking or playing video games into the wee hours.

The directive is not the first time that military officials have acknowledged the need for troops to get more rest. The Navy in 2018 mandated sailors deployed on aircraft carriers receive eight hours of sleep every 24 hours, after investigators found sleep deprivation was a major factor in the separate, deadly crashes in 2017 of the destroyers USS Fitzgerald and USS John S. McCain.

To ensure soldiers’ wellness, the Army plans to build new teams of soldiers and civilians focused on elements of holistic health and fitness into its brigades and similarly sized units. The 25-37 person teams, called H2F performance teams, will include dietitians, athletic trainers, occupational and physical therapists, cognitive performance experts and other health- and fitness-focused experts, Reed said Thursday.

The Army has already begun moving uniformed military personnel into some of its brigades. Reed said the Army will first build the performance teams in 28 active-duty brigades. It intends to incorporate the teams into all of the service’s 110 active-duty, brigade-sized elements by October 2026, she said.

The new field manual also calls for the Army to build soldier health and fitness facilities for those 110 brigades at installations across the globe. The new facilities, called Soldier Performance Readiness Centers, are envisioned as a one-stop shop for soldiers to conduct physical training and other health-related activities.

Brigades at Fort Bliss, Texas, and Fort Drum, N.Y., already have similar facilities, Reed said. However, they do not incorporate all the aspects of new facilities that the Army aims to build for all 110 of its brigades between 2023 and 2026, she said. The Army has yet to determine how much the new facilities will cost, Reed said.

The Army envisions building a 40,000-square-foot Soldier Performance Readiness Center for each of its brigades. The facilities are to include indoor and outdoor training areas, dedicated ACFT testing space with the equipment necessary to train for and conduct testing, a track, climbing pods, and strength-training equipment, according to the field manual. The facilities would also include classroom and counseling spaces where soldiers would engage with the new performance teams, the manual states.

“Company- or platoon-sized units rotate into the building several times per week to receive H2F education, individual programming, specialized training and coaching from H2F performance team members,” according to the field manual.

Reed said the shift to the individualized, holistic health approach will take some time, but the Army’s top leaders believe it is a necessary “culture shift” for soldiers.

“We are confident that once H2F performance teams and [Soldier Performance Readiness Centers] are fielded and integrated, leaders will recognize the benefits of improved soldier readiness, lower numbers and severity of injuries, and an overall reduction in soldier nonavailability rates,” she said.