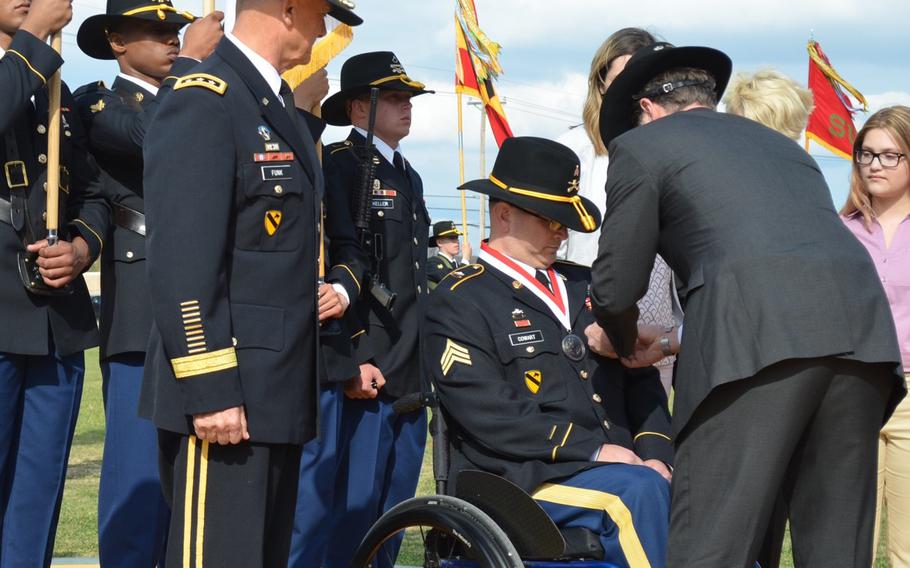 Buy Photo
Chris Widell pins the Distinguished Service Cross on retired Sgt. Daniel Cowart during a ceremony March 20 at Fort Hood, Texas. Widell is a former Army officer and friend who Cowart said helped him regain confidence and purpose after being wounded in combat. Cowart received an upgrade from the Silver Star medal after a review of his actions on May 13, 2007, in Samarra, Iraq. (Rose L. Thayer/Stars and Stripes)

FORT HOOD, Texas — An unexpected phone call in December from the Army tipped off retired Sgt. Daniel Cowart that something was in the works. The caller wanted to confirm his contact information — 11 years after leaving the service.

A recipient of the Silver Star, Cowart brushed it off, assuming someone wanted to send him an invitation to an event. A second phone call later that day from the Pentagon triggered his curiosity. He was told to expect a third call from a senior ranking official in the next day or two – and that it was good news.

The next day, Sgt. Maj. of the Army Daniel Dailey called to congratulate Cowart — his Silver Star would soon be upgraded to the Distinguished Service Cross, the Army's second highest award for valor.

“I had no idea my award was under review,” said Cowart, who now lives in Santa Fe, Texas, near Houston. “The Distinguished Service Cross is a great honor.”

Cowart’s award is one of a dozen Silver Star medals announced recently by the Army for upgrade through a review process of post-9/11 valor awards that began in 2016. All military departments have completed their respective reviews, said Air Force Lt. Col. Carla Gleason, Pentagon spokeswoman. However, there are a few Army cases still pending final decision or announcement. Of the Army’s 12 awards announced this year, only five names have been released.

The review encompassed about 100 citations of the Distinguished Service Cross, Navy Cross and Air Force Cross and about 1,000 Silver Star recommendations.

“The Army is currently in the process of scheduling the associated award presentation ceremonies,” she said.

When then-Defense Secretary Ash Carter ordered the review, the Pentagon established a definition for combat that all services now use: “The definition will encompass meritorious service while personally exposed to hostile action or while under significant risk of hostile action.”

So far, three of the Medals of Honor have been presented and the fourth ceremony to honor the late Staff Sgt. Travis Atkins will take place at the White House on March 27. Atkins died June 1, 2007 while deployed near Bagdad, Iraq, with the 10th Mountain Division. He saved the lives of three other soldiers by shielding them from a suicide bomber.

Cowart said Dailey told him during their call that he sat on the review board for Cowart’s medal review and the process took about one year.

Cowart’s medal was awarded based on his actions May 13, 2007 in Samarra, Iraq, while serving as gunner with 1st Platoon, Delta Company, 3rd Battalion, 8th Cavalry Regiment — part of the 1st Cavalry Division. At a traffic checkpoint operated by his platoon, two occupants from a vehicle exited a car — one opened fire on the soldiers and the other was wearing a suicide vest.

Cowart tackled the man in the vest, who ultimately detonated the device. While his actions limited damage from the explosion, Cowart’s platoon leader 1st Lt. Andrew Bacevich Jr., who was nearby, died as a result of the blast. Cowart lost his left leg.

"After the explosion, it starts to get a little blurry,” Cowart said in an Army new release. “I know I didn't see a weapon. I didn't see a suicide vest. I wasn't just going to shoot an unarmed guy. But I knew he was a threat and had to do something. We had a struggle, but then it was all black and I woke up in a hospital in Ballad [Iraq].”

Eventually, Cowart was moved to Brooke Army Medical Center in San Antonio, where he would spend the next 15 months.

Jonathan Free served in Cowart’s platoon and was there that day. Cowart served as Free’s sergeant and described him as the type of leader who was actually looking out for his soldiers.

“It was such an intense moment,” said Free, who traveled from Colorado to witness the pinning ceremony. In the moments following the attack, “I felt if I wasn’t with him, he wasn’t going to be OK. That’s how I feel today with him getting the award.”

Craig Hall, a member of the platoon who was wounded two weeks before Cowart, was there with him at the medical center in San Antonio. Together, the two mourned the loss of their lieutenant and recovered from their wounds.

“(Cowart) is one of the only guys I was able to speak to afterward. We are mentally and spiritually connected. He’s a lifelong friend,” said Hall, who flew to Texas from Massachusetts for the ceremony because he felt he owed it to Bacevich.

The award upgrade “is a testament to the guy (Cowart). Really is. He’s selfless and he cares about everyone,” Hall said.

Returning to Fort Hood for the ceremony this week, the 1st Cavalry Division rolled out the red carpet for Cowart and his family. They were given access to view military vehicles up close, tour the museum and stables, and his 14-year-old twin daughters rode horses from the division’s Horse Cavalry Detachment.

“I am honored and humbled,” Cowart said Wednesday at the podium during his ceremony, standing before hundreds of active-duty servicemembers who filled the bleachers and spilled onto the surrounding grass.

Free and Hall were joined at the ceremony by about a dozen other veterans who served alongside Cowart, who poke of the joy of seeing his fellow soldiers again, as well as the difficult memories it conjured.

“Reuniting also brings sadness. Sadly, one member of the crew isn’t here,” he said, referring to Bacevich. “I think about those events every day.”