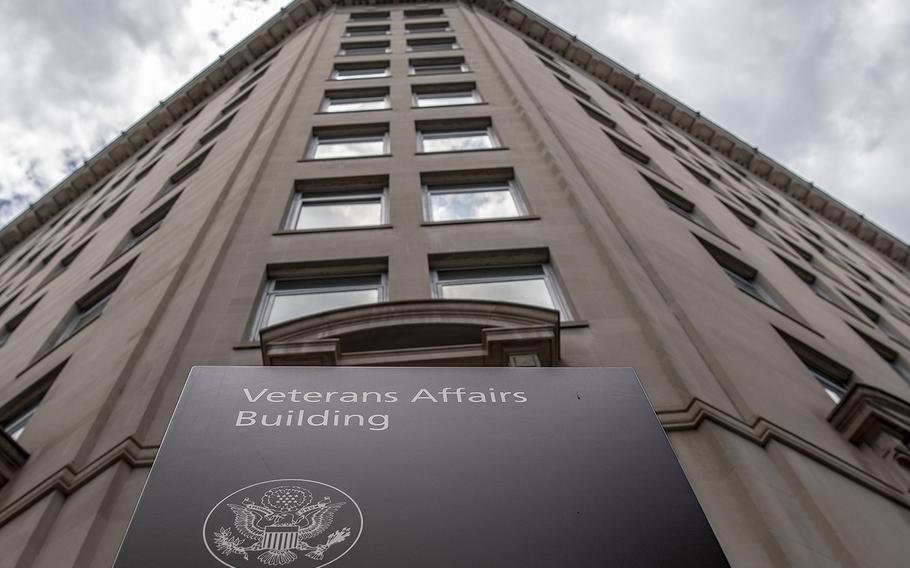 The headquarters building of the Department of Veterans Affairs as seen on June 28, 2018, in Washington, D.C. (Carlos Bongioanni/Stars and Stripes)

WASHINGTON – Over a period of nine years, clinical psychologist William Haddad performed about 6,000 compensation and pension exams, acting as an arbiter of whether veterans were eligible for government benefits.

Haddad examined four veterans every workday and sent their exam results to the Department of Veterans Affairs. If a veteran was paralyzed, ill or otherwise couldn’t make it into the clinic, he would go to them. When a veteran needed immediate mental health care, he referred them directly to the local VA.

At one point, four nurse practitioners and three psychologists — including Haddad — worked out of a compensation and pension clinic that was part of the VA health care system in Providence, Rhode Island. They all enjoyed their work, Haddad said, believing they did a good job for the veterans they served and helped many get access to their earned benefits.

Several months ago, that ended.

The clinic disbanded and the staff was assigned to other areas of the VA.

“Rumors started flying in January, but no one ever addressed it,” Haddad said. “Myself and another psychologist always asked the director but never got an answer. A few months ago, they brought in a guy from Washington, and things started to change. They kept us in the dark, and then that was it. We were done.”

The closure was part of a VA plan to shutter its in-house compensation and pension program and outsource all the examinations, which are crucial to determining whether veterans are eligible for VA benefits.

During a C&P exam, a health care provider examines a veteran to help determine whether his or her disabilities are connected to military service. The information gathered during the exam is used by the VA to issue a disability rating, which determines how much monthly compensation the veteran is due.

The VA sent an email to its staff Oct. 21, saying compensation and pension examinations were “no longer conducted” by the department. The email, obtained by Stars and Stripes, directed employees to stop contacting VA hospitals and clinics about performing the examinations.

Susan Carter, director of the VA’s office of media relations, claimed the effort would increase convenience for veterans because the VA would have access to a larger group of examiners closer to their homes.

Haddad disagreed. While a veteran could undergo a mental health exam, an audiology exam and a physical in one day at his clinic, veterans would now have to set three separate appointments, he said. Since the clinic’s closure, he’s heard from some veterans who have been sent from Providence to appointments in Boston and New Hampshire.

“Those are trips most veterans would rather not have to take,” Haddad said.

Exam backlogSome lawmakers are also concerned about the quality of contracted exams and contractors’ lack of experience diagnosing conditions that are unique to veterans. The VA has increasingly relied on contractors for compensation and pension exams, but lawmakers said they were led to believe the contracted examiners were meant to supplement the VA program — not replace it.

As of Thursday, contractors were handling about 80% of all the exams, Carter said. The VA is performing some telehealth exams, as well as “Acceptable Clinical Evidence” exams, in which staff review records to determine if there is enough information to decide a claim without having to see a veteran in person.

Rep. Elaine Luria, D-Va., sent a letter to VA Secretary Robert Wilkie on Oct. 20 and asked several questions about the decision to contract all exams. Luria leads the Subcommittee on Disability Assistance and Memorial Affairs, part of the House Committee on Veterans’ Affairs. She requested answers by Nov. 16, but that date came and went without a response, said Miguel Salazar, a spokesman for the committee.

“VA still has yet to respond to the letter from Chair Luria, now roughly 15 days past the Nov 16 deadline, and their tone has become prickly around this issue,” Salazar said in an email.

Primarily, Luria wanted to know why the VA decided to shutter its compensation and pension program at a time when there is a backlog of requests for exams. The department suspended exams in April, as coronavirus cases grew across the United States. During that time, the backlog grew to about 350,000 exam requests.

Sen. Jon Tester, D-Mont., and nine other senators asked the same question in a letter to Wilkie on Nov. 20.

“Given’s VA’s admission that there is a 350,000 backlog of C&P exams throughout the nation … we fail to see the logic for continuing to reduce VA’s internal capacity to perform these exams as VA already has experienced, qualified, and well-trained personnel ready to perform these duties,” they wrote.

In September, the Senate Committee on Veterans’ Affairs advanced legislation that would prohibit the VA from eliminating compensation and pension examiner positions until requests returned to pre-pandemic levels. Tester and the other senators accused the VA of rushing to eliminate positions before the bill could be passed by Congress. At the end of September, the VA reassigned examiners at the Hampton Road VA Medical Center in Virginia and closed a clinic in Columbia, Missouri, that performed the exams, Tester’s letter states.

“In recent months, [compensation and pension] service lines across the country are being dismantled and hollowed out. … VA’s rush to privatize these exams is careless and veterans will suffer from this decision as a result,” the letter reads.

Carter said Thursday that none of the VA’s compensation and pension examiners were terminated as a result of the department ending its in-house program.

“Examiners will be absorbed into other necessary roles and responsibilities, including those focused on patient care,” she said.

When the VA closed his clinic in Providence, Haddad, 69, was reassigned to a unit treating veterans with substance abuse. After a short time, he decided to retire, though he had hoped to work at least another year.

“It’s really too bad because I could’ve helped with the backlog,” Haddad said. “Some of these guys have been waiting for months. Waiting for money is causing more distress for these people.”

Questionable qualityIn addition to concerns about the backlog, lawmakers are worried about the quality of exams performed by contractors.

Luria urged the VA to maintain in-house examiners for veterans suffering from military sexual trauma, traumatic brain injury and illnesses caused by toxic exposure — all conditions unique to veterans and that often call for specialists. Likewise, Tester and the nine other senators argued that contractors had less experience evaluating veterans’ unique conditions and could misdiagnose them, leading to an increase in appeals.

The Government Accountability Office reported in 2018 that the department doesn’t track whether contractors are meeting quality and timeliness standards. The VA has not yet implemented the recommendations the GAO made in that report, Luria said. She’s worried that as the VA expands its use of contractors, the department lacks the ability to oversee them.

The VA does perform oversight, according to Carter. The department conducts random audits on examination reports completed by contractors, and the agency does special reviews, focused on a certain examiner or a certain type of exam. The VA also provides feedback through monthly reports and calls with contracted examiners, she said.

During Haddad’s years performing compensation exams, the VA would sometimes be unhappy with exams performed by contractors and would refer veterans to his clinic to be examined again.

“Contract people really aren’t that invested in it,” Haddad said.

Bruce Trickel, a former senior administrative officer at the VA Central Iowa Healthcare System, also has concerns about the lack of quality in contracted exams.

Trickel, who retired in May, recently oversaw the compensation and pension program at the Des Moines VA. Starting about 18 months ago, he hadn’t been allowed to fill the empty positions when examiners retired or relocated. The program in Des Moines ended this year after the final retirement, he said.

“I can tell you from personal experience that the quality of [compensation and pension] exams by the private sector contractors [is] not anywhere near the same quality the VA physicians, nurse practitioners and physician assistants provide,” Trickel said in an email.

In their letter, Tester and the other senators referenced reports from the GAO and the VA Office of Inspector General listing problems with how the department oversees compensation contractors. The senators pleaded with Wilkie to address the concerns before outsourcing more examinations.

“The track record of private contractors who perform [compensation and pension] exams, and VBA’s oversight of them is mixed at best, as these and other reports indicate there are problems with cost, quality, overbilling, lack of subject matter expertise, and training of those conducting the exams,” the senators wrote. “Based on the data available today, neither the contractors nor the VA have made their case that their approach is benefitting taxpayers or veterans.”