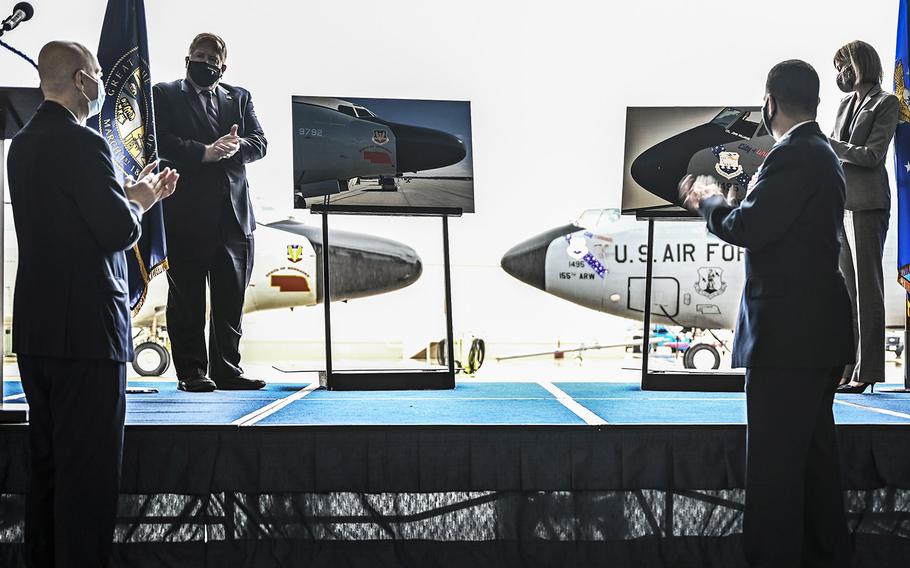 Mayor Rusty Hike of Bellevue, Nebraska, unveils the new nose art in homage to the old Lincoln Air Force Base with Mayor Leirion Gaylor Baird of Lincoln, Nebraska, April 16, 2021, at the Nebraska National Guard air base in Lincoln. The 55th Wing will be relocated in Lincoln during runway renovations at Offutt Air Force Base for the next 18 months. (Shannon Niels/U.S. Air National Guard)

Nebraska Gov. Pete Ricketts on Friday symbolically reopened Lincoln Air Force Base -- a Cold War-era Air Force base that operated where the National Guard base and municipal airport are now, according to the proclamation signed Friday.

The proclamation honors the airport’s military history and allows the National Guard base at the airport to be called Lincoln Air Force Base until March 1, 2023, when the 55th Wing is expected to return to Offutt.

First opened in 1942, the airport initially operated until 1946 as Lincoln Army Airfield “to meet the growing demand of training soldiers and airmen for service in World War II,” according to Ricketts’ proclamation.

The airport was later known as Lincoln Air Force Base from 1952 to 1966 when it hosted nuclear bombers and intercontinental ballistic units in support of Strategic Air Command’s nuclear deterrence mission, according to the proclamation.

“The Lincoln Municipal Airport will host a larger air force than many countries and will again be worthy of the title Lincoln Air Force Base,” Ricketts said in the proclamation.

The location was chosen because the airport boasts a two-mile-long runway “built to support strategic airways,” Bohac said.

Additionally, the joint airport and National Guard base is about an hour drive west from Offutt near Omaha, meaning military families can stay together during the relocation, Bohac said.

“It is an excellent example of active duty and Air National Guard coming together to support the mission of every day serving our national security interests,” he said of the arrangement.

The National Guard base at the airport is home to 1,300 Air and Army National Guard aviation personnel supporting missions with nine fixed-wing aircraft and 15 helicopters, according to the proclamation.

“The eight KC-135R aircraft of the 155th Air Refueling Wing are engaged in global mobility operations and nuclear deterrence missions while the 15 Army helicopters and fixed-wing aircraft conduct medical evacuation, reconnaissance and security missions,” Ricketts said in the proclamation.

Offutt Air Force Base is home to U.S. Strategic Command headquarters, the unified combatant command that oversees the military’s strategic deterrence and global strike capabilities, according to its website. About 8,000 military and civilian personnel work at the 4.3-square-mile base, making it one of Nebraska’s largest employers, according to the Omaha Chamber of Commerce.