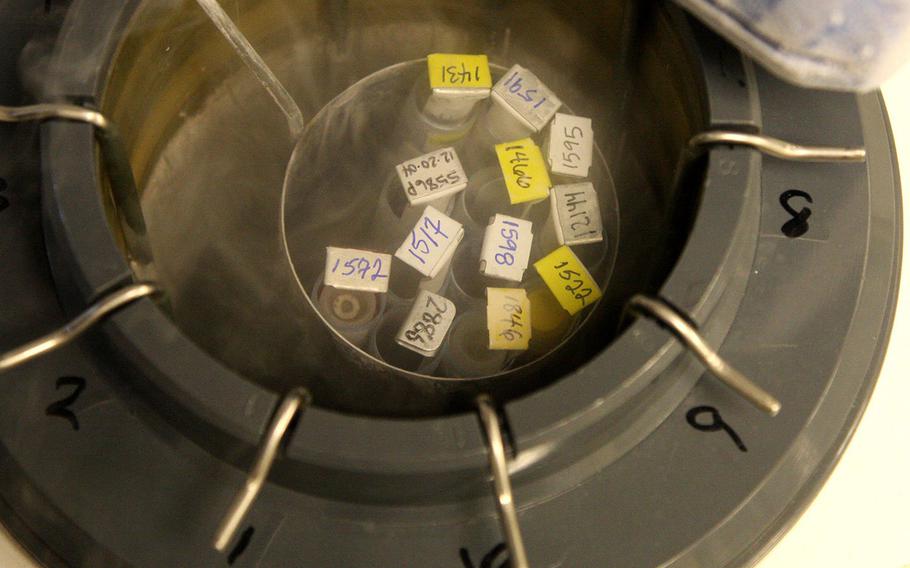 WASHINGTON — Lawmakers and advocates of in vitro fertilization were focused this week on the House, where lawmakers will likely make or break an effort to end on a 24-year ban on providing the procedure to wounded veterans.

Supporters scored a key victory when the Senate passed a repeal of the ban last month as part of the annual Department of Veterans Affairs budget bill. But senators on Wednesday began negotiations on a final budget bill with the House, where many conservatives still oppose allowing the VA to provide IVF because it could lead to embryos being destroyed.

Two wounded veterans and their wives, with support from the Wounded Warrior Project, made emotional pleas in front of the Capitol on Wednesday and urged House lawmakers to support lifting the ban on the procedure. Earlier this week, the Veterans of Foreign Wars, which represents about 1.7 million veterans, sent a letter to lawmakers asking the same.

“Like I tell everybody, I’d rather stare my enemy in the face and get blown up again and again than look at the depression and how I failed my wife because I cannot give her the one thing she wants,” said Jeffrey Lynch, an Army veteran from North Carolina who was wounded twice during deployments in 2005-2008.

Lynch suffered severe traumatic brain injury and underwent 130 surgeries. He and his wife Christy now have a daughter, after losing a newborn son, and are hoping to have another child.

The military gives troops and their families access to IVF treatment, which seeks to fertilize eggs outside the body and can be effective in helping people with spinal, genital, urinary tract and other types of battlefield injuries have children.

But the benefit evaporates when servicemembers leave the military. Congress banned the VA from paying for the procedure in 1992 due to beliefs about when life begins and the morality of discarding eggs that have been fertilized by sperm.

The Senate and House formed a conference committee Wednesday and sat down to hammer out a final VA budget bill. Committee members will debate and decide whether the repeal of the ban supported by senators in May will remain in a final bill, which must be passed by Congress.

The repeal, sponsored by longtime IVF proponent Sen. Patty Murray, D-Wash., provides $88 million to the VA to cover the procedures for veterans.

“Come down here meet these families tell them face to face why the government they fought for, they bled for, should not cover the health care they need to start and grow a family,” Larsen said.

But the House could be unwilling to go along.

Rep. Jeff Miller, R-Fla., chairman of the House Committee on Veterans’ Affairs, laid out the chamber’s thinking in April with a bill designed to get around conservative opposition to IVF and the concerns over unused embryos.

His legislation proposed a $20,000 special payment to servicemembers who suffer severe injuries that leave them unable to have children. Miller said the money could be used for adoption or in any other way wounded veterans see fit, leaving open the possibility of the payments being used for IVF without explicitly writing it into law.

The bill has yet to advance in the House.

Wounded veterans are now forced to pay for the fertility procedures – about $10,000 for a single round of treatment that may or may not be successful -- from private providers outside of the VA.

“We were devastated when we learned that,” said Matt Keill, an Army veteran who was shot in the neck by a sniper in 2007 and left paralyzed.

Keill said his family paid $32,000 and went into credit card debt in order to have two children through IVF.

Questions over the fairness of the ban have been underscored as troops have returned home from Iraq and Afghanistan with severe injuries from improvised explosive devices. Advocates estimate that several thousand veterans, as well as their families, could benefit from the treatment.

“It is unacceptable that these veterans are now required to incur tens of thousands of dollars in debt to start a family or forgo having children altogether simply because VA is prohibited from treating their service-connected infertility,” Robert Wallace, executive director of the VFW’s Washington, D.C. office, wrote Monday to House lawmakers.