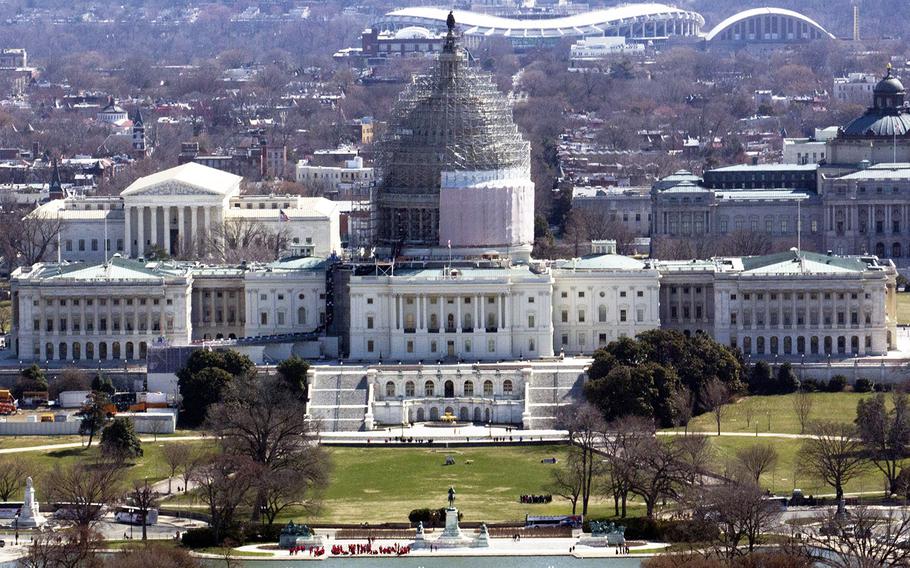 The west side of the U.S. Capitol, as seen from the Washington Monument in March, 2015. A House panel on Wednesday, June 17, 2015, rejected a proposal to pull out troops from Iraq. A group of lawmakers were hoping the proposal would force a war vote. (Joe Gromelski/Stars and Stripes)

WASHINGTON — The House rejected a proposal Wednesday that would have pulled all troops out of Iraq and Syria by the end of the year unless Congress passed a new war authorization.

The bill was an attempt by a group of lawmakers to force a debate and vote on the war against the Islamic State nearly a year after the Obama administration claimed legal authority to use force and began air strikes. But opponents of the legislation blasted the potential pullout as a dangerous risk to the United States.

The final vote was 139 to 288 with one member abstaining.

The administration says it can wage the war under an authorization against al-Qaeda passed after the 9/11 attacks. Many lawmakers have argued Congress is granted the power to declare war by the constitution and should weigh in, but neither the House nor Senate pursued any legislation.

“Ten months after the war began we have had no debate and no vote. This is outrageous,” said Rep. Barbara Lee, D-Calif., who sponsored the bill along with Rep. Jim McGovern, D-Mass., and Rep. Walter Jones, R-N.C.

The failed resolution called on President Barack Obama to pull forces out of Iraq and Syria within 30 days of passage — though an extension until the end of December was possible if the president deemed it necessary — in lieu of a new authorization for the use of military force, or AUMF.

Rep. David Cicilline, D-R.I., said there was no intent to actually pull out troops, only force a substantial floor vote on the war.

“This resolution is our only vehicle to force the House to do what it has failed to do,” he said.

A new authorization could set the parameters of the war, such as a definition of the enemy, any geographic boundaries and a time limit. The Obama administration has claimed it can strike any group associated with al-Qaeda, including the Islamic State, anywhere around the world under the existing AUMF.

Lawmakers on both sides of the aisle have called for a new AUMF. But the possible military pullout turned many against the proposal.

“I think an outright withdrawal of troops within the next six weeks would be a terrible mistake,” Rep. Brendan Boyle, D-Pa., said.

Both the House and Senate balked at voting on an authorization during the lame-duck session last year. Congress instead approved funding and training for moderate Syrian rebels as a way to keep the war against the hardline jihadist group going.

After urging from Congress, the White House provided a draft version of an AUMF in February as a starting point for debate and top administration officials went to Capitol Hill in March to ask for a new authorization.

“But this president does not have a strategy to accomplish this,” said Rep. Michael McCaul, R-Texas, chairman of the Homeland Security Committee. “We continue to fight the terrorists with one hand tied behind our back. The only worse thing to do is completely disengage.”