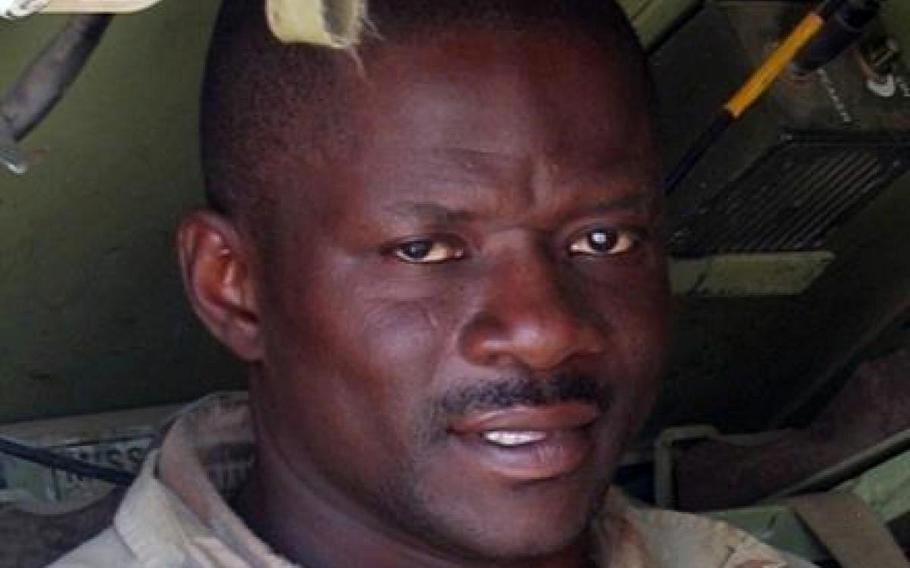 AUSTIN, Texas — Army Sgt. 1st Class Alwyn Cashe is one step closer to receiving a posthumous Medal of Honor after the House passed a bill Tuesday night that waives the federally mandated time limit for presenting him the nation’s highest award for valor.

The bill was filed following an Aug. 24 letter from Defense Secretary Mark Esper stating he believes Cashe should receive an upgrade from his Silver Star to the Medal of Honor for his actions in Iraq in 2005.

“Alwyn’s a hero in the purest and most profound sense. What he did on that Iraq battlefield really takes your breath away,” Rep. Stephanie Murphy, D-Fla., said Tuesday during a conference call. She said she has been working with Kasinal Cashe White, the soldier’s sister, to honor him.

Murphy introduced the bill, H.R. 8276, to waive a federal law that generally requires a Medal of Honor to be awarded within five years of the actions that gave rise to the award, a requirement that Congress regularly waives. She introduced the bill alongside Reps. Michael Waltz, R-Fla., and Dan Crenshaw, R-Texas, who are both veterans. The House approved the bill by unanimous consent.

“With unanimous passage of our bill by the House today, we are one step closer to ensuring that Alwyn Cashe receives the Medal of Honor he earned,” Murphy said. “I am grateful that so many Americans are learning of and being inspired by SFC Cashe’s heroic actions, which are so extraordinary they nearly defy description.”

Cashe was 35 years old when he died Nov. 5, 2005, at Brooke Army Medical Center in San Antonio from injuries sustained Oct. 17. While deployed with the 3rd Infantry Division to Samarra, Iraq, Cashe was riding in a Bradley Fighting Vehicle that rolled over a roadside bomb that exploded and the vehicle was quickly engulfed in flames.

Cashe was relatively unharmed, but drenched in fuel, according to his Silver Star award citation. He then made numerous trips to and from the burning vehicle to extract his fellow soldiers, even while his own clothing continued to catch fire. He suffered second- and third-degree burns on more than 72% of his body. His actions saved the lives of six soldiers.

“It’s not every day you read an extraordinary story like Alwyn Cashe’s,” Waltz said in a statement. “His bravery in the face of danger has inspired so many already – and this is a significant step forward to properly recognize him for his heroism. I’m incredibly proud to see the House of Representatives come together in favor of this legislation to award him the Medal of Honor. Now we need our colleagues in the Senate to pass our bill.”

Cashe was born in Sanford, Fla., and raised in Oviedo, both of which are located in Murphy’s congressional district. He is buried in Sanford. After reading his story, Murphy connected in with Kasinal Cashe White to rename a post office in Oviedo in Cashe’s honor in 2018. Since then, she has continued to work with White to upgrade his award to a Medal of Honor.

White told reporters Tuesday that upgrading her brother’s medal has been her passion and Murphy has “moved mountains” in the bureaucratic process.

Murphy, Crenshaw and Waltz wrote a letter to Esper in October 2019 urging him consider upgrading the award. Last month, Esper wrote back and agreed. However, he said a waiver from Congress was first necessary.

“Once legislation is enacted authorizing the president of the United States to award, if he so chooses, the Medal of Honor to SFC Cashe, I will provide my endorsement to the president,” Esper wrote.

With Murphy’s bill through the House, it now must clear the Senate, where she fears it may not come up for a vote, despite strong bipartisan support. As a backup plan, the congresswoman added language to the National Defense Authorization Act for fiscal year 2021 that would waive the time limit for Cashe’s award.

“What’s undeniable is that Alwyn Cashe is an American hero who did incredibly brave things and who deserves the Medal of Honor,” Murphy said. “One way or the other, we’re going to get this done.”