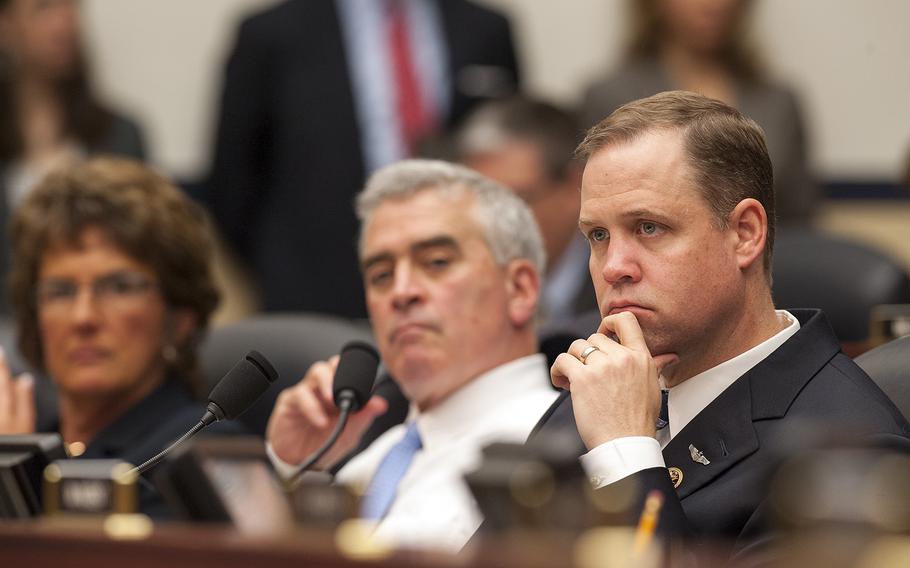 Members of the House Committee on Armed Services listen to comments during a hearing on the National Defense Authorization Bill on Wednesday, April 27, 2016. (Carlos Bongioanni/Stars and Stripes)

With U.S. forces still at war and House members up for re-election in November, the House Armed Services Committee rejected almost every idea the Obama administration proposed in its 2017 budget request to dampen military compensation and apply dollars saved to other defense priorities.

The committee not only refused to force working-age retirees and family members to pay higher fees and co-pays for health care in 2018, it took the unusual step of making its pared-down packet of higher out-of-pocket costs apply primarily to future generations of servicemembers.

As described here last week the committee already was primed to reject a fourth consecutive military pay raise cap and the deeper force drawdown sought by the department. But here are highlights of what the full committee also sent to the House floor on a final 60-to-2 vote:

Health care reform — The Defense Department had sought multi-year hikes in fees and co-payments to drive more patients, particularly nonmedical retirees and their families, into managed care and military facilities.

The committee rejected most fee increases but agreed to streamline and narrow Tricare options to a health maintenance organization (HMO) and preferred provider organization (PPO). The HMO would still be called Tricare Prime. Tricare Standard, the fee-for-service insurance option, would be renamed Preferred and its network of providers called a PPO.

For Prime users, enrollment fees won’t change except for annual increases to match the percentage rise of retiree cost-of-living adjustments. For Preferred (Standard) users, if the U.S. Comptroller General certifies in 2020 that ease of access and other quality gains have been reached, Tricare could begin a $100 a year enrollment fee for singles and $200 for families. Otherwise fees or co-pays for current beneficiaries would be unchanged, including for the elderly using Tricare for Life with Medicare.

Preferred users would have to enroll annually in the PPO to help Tricare better manage costs and resources. But only new entrants to the military on or after Jan. 1, 2018, would be subjected to slightly higher Prime and Preferred enrollment fees. Preferred deductibles and cost-shares would be higher still if beneficiaries decide to use non-network providers.

By Oct. 1, 2018, all military facilities and budgets would be managed by the Defense Health Agency rather than their services. And military treatment facilities would be required to provide urgent care until 11 p.m.

The Senate Armed Services Committee could decide to adopt health reforms nearer to what the Department of Defense proposed. The House committee plan to spare current forces and retirees most higher fees had some senior Democrats questioning its affordability with the 2011 Budget Control Act still set to resume a hard squeeze on future defense budgets.

Washington Rep. Adam Smith, the committee’s ranking Democrat, grumbled that Tricare soon could be saddled with the complexity of administering “two fee structures for the next fifty years” for retirees.

His worry made one advocate for retirees guffaw, noting that Congress voted last year created a fourth military retirement system, this one for new entrants after 2017 and younger current members who might be enticed to opt in and save the government even more money. On that matter, Congress didn’t wring its hands over new administrative burdens.

SSIA extendedFor 62,000 surviving spouses who have Survivor Benefit Plan (SBP) payments reduced dollar for dollar by Dependency and Indemnity Compensation (DIC) from the Department of Veterans Affairs, the committee voted to extend for one year a Special Survivor Indemnity Allowance. SSIA is intended to ease the impact of the SBP-DIC offset. It is set to climb to $310 a month in October and then sunset a year later. The committee voted to extend SSIA through fiscal 2018. The long-term goal is still to end the offset entirely, said Rep. Joe Heck, R-Nev., who led markup of the bill’s personnel provisions.

Russell took aim at a “windfall” feature of the USFSPA that retirees have criticized for decades. If a member is not retired when divorced, state courts often award the ex-spouse a percentage of future retired pay. In effect, this allows the value of the “property” to rise based on promotions and longevity pay increases earned after the divorce. In 2001, the Armed Forces Tax Council said this was inconsistent with treatment of other martial assets by divorce courts. The amendment would end the windfall in future divorce cases by directing that an ex-spouse’s share of retirement must be based on a member’s grade or rank at time of divorce.

Making such a change retroactive would force recalculation of tens of thousand of divorce settlements, an unpopular idea with ex-spouses. So the change is prospective only. But both Republicans and Democrats praised the amendment as fair. It cleared committee on an uncontested voice vote.

Commissary reformsThe committee rejected an amendment from Rep. Tim Walz, D-Minn., that would have delayed commissary reforms, including adoption of variable pricing, private label brands or the conversion of commissaries to nonappropriated fund activities like base exchanges, for up to two years by mandating more reports and tougher oversight.

Heck and Committee Chairman Mac Thornberry, R-Texas, argued that the reform package as written includes reasonable “notice and wait” safeguards at each phase of implementation, giving Congress 30 days to review and block any change if the shopping benefit appears to be at risk.

Women draft registrationWith all combat jobs now open to women, the committee voted 32-30 for an amendment to require women to register with Selective Service System. Rep. Duncan Hunter, R-Calif., who opposes women serving in infantry or Special Forces, said he offered the amendment to spark a debate that the Congress, so far, has avoided.