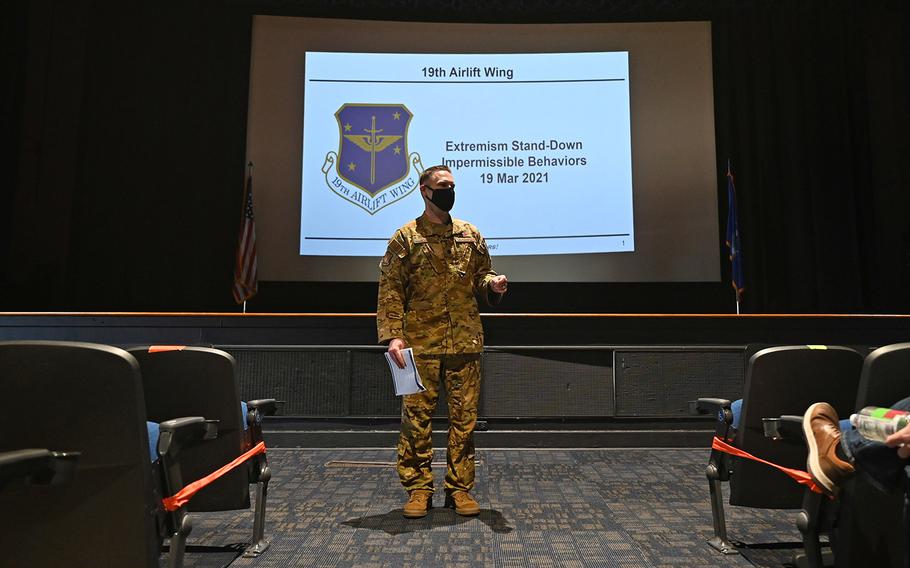 WASHINGTON — House lawmakers on Wednesday voiced concern over an absence of centralized Defense Department data on how many extremists there are in the military as Congress looks for ways to tackle the issue after the Jan. 6 attack on the Capitol.

Data on extremism in the military “is indeed really poor. It is hard to have a conversation about this when we don’t have the data and when we don't have the Department of Defense to talk through these issues,” Rep. Elissa Slotkin, D-Mich., said during a House Armed Services Committee hearing on the issue.

The witness panel for the hearing did not include Defense Department officials and was made up of experts from the Southern Poverty Law Center and the legal nonprofit First Liberty Institute, as well as a professor from American University.

Slotkin said if the committee is discussing Defense Department action on extremism in the ranks, Pentagon officials should be given the “opportunity to talk about the breadth of the problem, once they’ve had a full chance to review it.”

During the hearing, lawmakers sparred over ways to get at the problem as extremism stand-downs take place at bases around the world for all branches of the military at the direction of Defense Secretary Lloyd Austin. Military leaders must gather with their units by the first week of April to discuss what extremism is, how and when to report it, and what it means to serve.

Austin ordered the stand-downs in February in response to the Jan. 6 riot at the Capitol. Thirty-seven military veterans and active-duty service members have been charged for their involvement, so far, according to a recent analysis from CBS News.

Audrey Kurth Cronin, director of the Center for Security, Innovation and New Technology at American University, told the committee Tuesday that the most urgent problem in finding ways to address extremism is an “absence of good data.”

“The 2021 Capitol insurrection leaves the impression that the number of extremists in the military is increasing. Yet, DOD officials repeatedly claim that the number is small. No one truly knows. No serious plan can be built without defining the scope of the problem,” she said.

When the defense secretary announced the stand-down in February at a news conference, he said he expects the numbers of extremists “to be small. But I would just say that, you know, small numbers in this case can have an outsized impact.”

Lawmakers on the committee largely agreed Wednesday that while the vast majority of those who serve do not espouse extremist views, any risk to national security should be examined and any military member who seeks to delegitimize the government needs to be weeded out of the ranks.

Cronin explained Defense Department services and agencies are not collecting centralized data to measure “allegations, disciplinary infractions, discharges or reprimands related to extremism.” It is also unclear how many military members are identified as extremists and how many crimes they have committed.

“Military leaders like to say that you cannot fix what you cannot measure, and no serious plan can be built without defining the scope of the problem,” Cronin said.

“We seem to lack an agreed upon baseline in fact from which we could even measure an increase or decrease in extremism,” he said.

Without clear data and without Defense Department witnesses to testify on the issue, Gallagher said: “I fear we’re left making somewhat wild suppositions based on our ideological priors, which is never a good place to be.”

Rep. Mike Rogers of Alabama, the ranking Republican on the committee, said if “there’s better data to be had, then we should address that in the [National Defense Authorization Act],” the annual bill that sets Pentagon policy and spending priorities.

Cronin told lawmakers that one way to collect data is to use command climate surveys that are used to assess the readiness of a command. A question about extremism could be added to the assessment that service members take anonymously to get a better sense of the extent of the problem.

She also proposed creating a consistent discharge code that can be tracked. Congress should direct the services to provide them with a regular report that includes cases that are reported through the discharge process, as well as cases that naturally come up independent of that process.