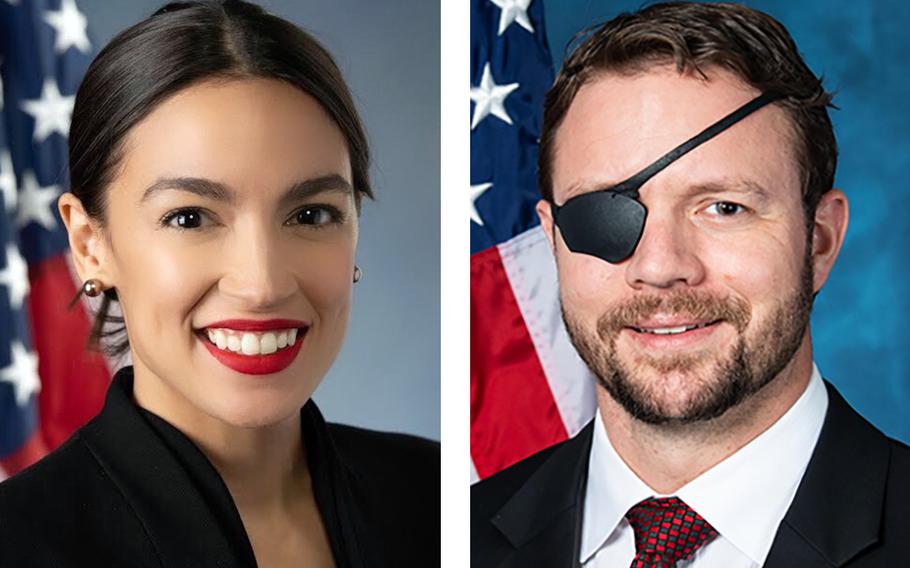 WASHINGTON – Two lawmakers who are on opposite ends of the political spectrum put their focus on Department of Veterans Affairs reform this week as the agency nears a deadline to establish a new program for veterans to access private doctors.

Reps. Dan Crenshaw, R-Texas, and Rep. Alexandria Ocasio-Cortez, D-N.Y., held town hall meetings in their districts, Crenshaw voicing his support for allowing more veterans to seek community care and Ocasio-Cortez describing it as a fix for the health care industry and not veterans.

The freshmen lawmakers have become media sensations in their respective parties, each gaining hundreds of thousands of social media followers – in Ocasio-Cortez’s case, millions – during their first months in the House.

“If it ain’t broke, don’t fix it,” Ocasio-Cortez said Wednesday at her town hall in The Bronx.

Neither Crenshaw nor Ocasio-Cortez were in Congress when lawmakers approved the VA Mission Act last year on a bipartisan basis. The law created a new community care program for VA patients that replaces the Veterans Choice Program, which has been in place since 2014 and was widely criticized as confusing and inflexible.

Under his proposed rules, veterans who must drive more than 30 minutes to reach their VA mental-health or primary-care providers – or wait longer than 20 days for an appointment – would be allowed to use a private doctor. For specialty care, veterans could go outside the VA for medical treatment if a VA provider was longer than a 60-minute drive away or there was longer than a 28-day wait.

Veterans can also seek private care if the care that they require isn’t available at their VA hospital or clinic, if they live in a state without a full-service VA facility, if a VA doctor deems it’s in their best medical interest, or if the care at their VA facility isn’t up to quality standards.

Veterans who were eligible for community are under the Choice program and live in North Dakota, South Dakota, Montana, Alaska and Wyoming can also keep their eligibility for private care.

Details about how the new rules will be put into effect remain unclear seven weeks before the deadline to implement them on June 6.

Ocasio-Cortez criticized the reform effort Wednesday, accusing the forces behind it of putting the health industry before veterans.

Ocasio-Cortez has garnered widespread attention since her primary victory over Rep. Joe Crowley, a Democrat who represented the New York district for 20 years.

Crenshaw, also a newcomer to Congress, came to the forefront following a cameo on Saturday Night Live, during which he forgave cast member Pete Davidson for joking about his eyepatch. Crenshaw, a former Navy SEAL, lost an eye in an improvised explosive device blast during a deployment to Afghanistan.

His response to the new program was opposite of Ocasio-Cortez’s – he alluded the rules might not go far enough to expand veterans’ access to private doctors.

“This is a step in the right direction,” Crenshaw said Thursday during his town hall. “I think the Mission Act will allow that flexibility, and if it doesn’t, then we need to tweak it to do that.”

Wilkie and other VA officials have vowed to meet the June 6 deadline for the new program, despite concerns from some Democrats, veterans organizations and information technology professionals.

During a Senate hearing this month, Adrian Atizado, deputy national legislative director for Disabled American Veterans, pleaded with the VA to postpone implementation of the new program. He cited concerns about how the VA would manage the new rules and noted recent warnings that the VA’s information technology system for the new program is flawed.

The U.S. Digital Service – a White House team of software developers that helps federal agencies improve their technology – recommended last month that the VA stop developing the IT system, which it described as having the potential to create confusion and disruption for veterans and VA doctors.

“Weighing all these factors, we believe the VA will not be sufficiently prepared…without compromising some form of quality and risking unnecessary disruptions in receiving the care that ill and injured veterans need,” Atizado said.