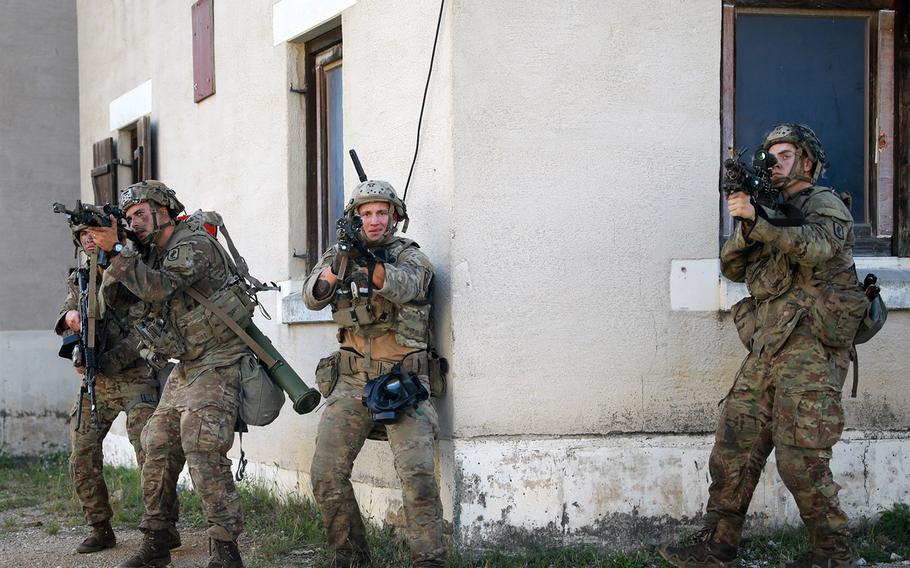 WASHINGTON — Rep. Ruben Gallego, D-Ariz., warned Thursday that if President Donald Trump continues with his plan to withdraw troops and their families from Germany, it could open the door for Russian aggression in Europe.

“Russia only operates on the idea of the threat of power,” Gallego, a Marine Corps veteran and a member of the House Armed Services Committee, said during a news conference. “Every time we’ve given them an inch, they have taken it and any type of reduction of forces in Europe will only encourage them more.”

Some lawmakers have challenged the plan announced by the White House in early June to pull some 9,500 troops out of Germany, which would reduce the American military force on the continent by about one-third. The 34,000 U.S. troops in Germany play a key role in reinforcing NATO’s eastern flank and supporting operations in Africa and the Middle East, advocates who oppose the move have said.

In July, Gallego and Rep. Don Bacon, R-Neb., successfully got a measure to halt the drawdown of troops in Germany into the House version of the 2021 National Defense Authorization Act, which sets yearly policy and funding priorities for the Pentagon.

The spending measure passed in the House and Senate. However, the Senate’s version did not include slowing down Trump’s planned withdrawal from Germany. A committee of House and Senate members now must address the difference in the two spending packages before sending it to Trump for his signature. This gives time to lawmakers in each chamber to lobby for their respective amendments to make it in the final version.

Gallego is urging Republican senators to back his effort to keep the U.S. troops in Germany.

But a key Senate leader has voiced his support for Trump’s plan. Sen. Jim Inhofe, R-Okla., chairman of the Senate Armed Services Committee, has said he believes “the concept for realigning U.S. military posture in Europe, as the president has approved, is sound,” but warned it will take “months to plan and years to execute.”

The time frame is likely due to the logistics of moving large numbers of troops out of Germany, where the military has invested billions of dollars for decades in infrastructure that would be difficult to replicate elsewhere in Europe.

The fate of the plan could hinge on the outcome of the presidential election in November. Gallego said he does not think former Vice President Joe Biden would move to reduce troops in Europe.

In an interview with Stars and Stripes in September, Biden blasted Trump’s contentious relationship with NATO, saying it is the military’s greatest readiness issue.

“They’re worried as hell about our failure to confront Russia diplomatically or other ways, and worried about ‘America First’ meaning ‘America Alone,’” Biden said. “First thing I’m going to have to do, and I’m not joking, if elected I’m going to have to get on the phone with the heads of state and say America’s back, you can count on us.”

Gallego said he doesn’t support troops being deployed and stationed all around the world, and the U.S. needs to move towards ending the wars in the Middle East and Afghanistan so the military can focus on potential future conflicts. He slammed Trump’s move as lacking any strategy.

“By us trying to pull back in this manner, we are more likely to cause a conflict than to stop a conflict,” Gallego said.