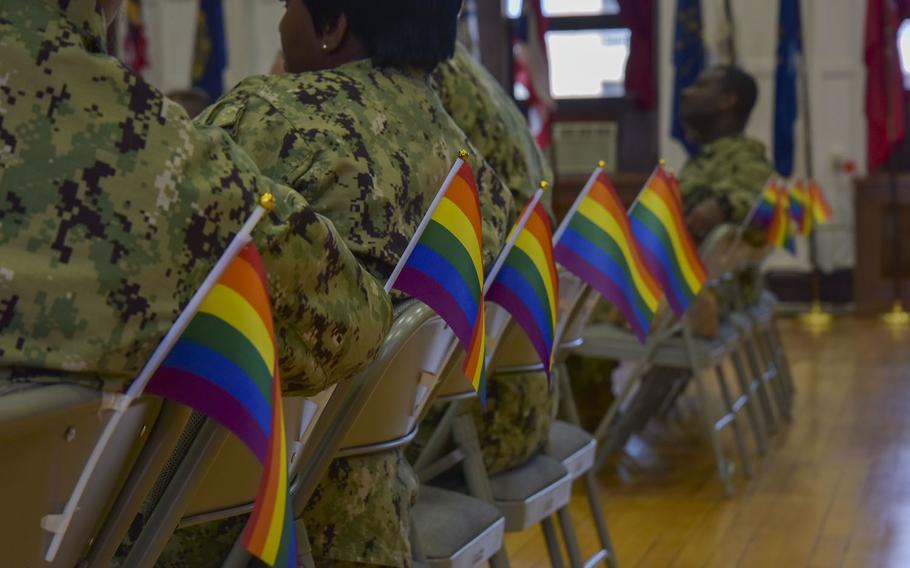 WASHINGTON — House Democrats on Wednesday urged the departments of Defense and Justice to eliminate President Donald Trump’s ban of transgender service in the military.

Rep. Suzan DelBene, D-Wash., sent a letter to Defense Secretary Mark Esper and Attorney General William Barr calling on the agencies to lift the rule disqualifying transgender military service. The move follows a decision in June by the Supreme Court protecting gay and transgender employees from being fired, disciplined, or turned down for jobs based on their sexual orientation. The letter was signed by 116 House Democrats.

“In light of the U.S. Supreme Court ruling … we urge the Department of Defense to immediately update its policies to eliminate the ban on open transgender military service,” lawmakers wrote in the letter. “Additionally, to prevent further harm to transgender service members, we urge the DOD to instruct the Department of Justice to negotiate the end to litigations challenging the ban.”

The White House declined to comment on the letter.

Democrats have blasted Trump for unraveling rules put in place during former President Barack Obama’s administration that generally allowed individuals diagnosed with gender dysphoria to serve in the armed services and as their preferred genders. In March 2019, the House approved a nonbinding resolution opposing strict limits on transgender service. The vote was 238-185.

“What this policy is primarily based on is ignorance and bias against the transgender community,” said Rep. Adam Smith, D-Wash., chairman of the House Armed Services Committee. “This is unfair discrimination, and it’s also harmful to national security.”

Trump announced the transgender ban in July 2017 via tweet, writing the military needed to focus on “decisive and overwhelming victory” without being burdened by the “tremendous medical costs and disruption” of having transgender personnel. His sudden policy reversal surprised top military leaders.

“The policy is insidious in operation but designed to be as comprehensive a ban as possible,” according to a report from the Palm Center, which studies LGBTQ military issues. “In that sense, it is a perfect parallel to the failed ‘don’t ask, don’t tell’ policy, also sold as not being a ban although designed to systemically push gay people out of military service — or at least keep them silent and invisible.”

The Trump administration’s policy is not a blanket ban on transgender service; however, advocates contend it is effectively a ban on new transgender recruits. The new rules, which went into effect last year, require troops diagnosed with gender dysphoria serve in their biological sex. It also bars people with a history of gender dysphoria from joining the military unless they have been “medically stable” in their biological sex for 36 months and have not transitioned.

Young, transgender people are at a much higher risk of suicide, risky sexual behavior and drug use, according to the national Centers for Disease Control and Prevention. A 2019 CDC study found 34.6% of high school transgender students attempted suicide.