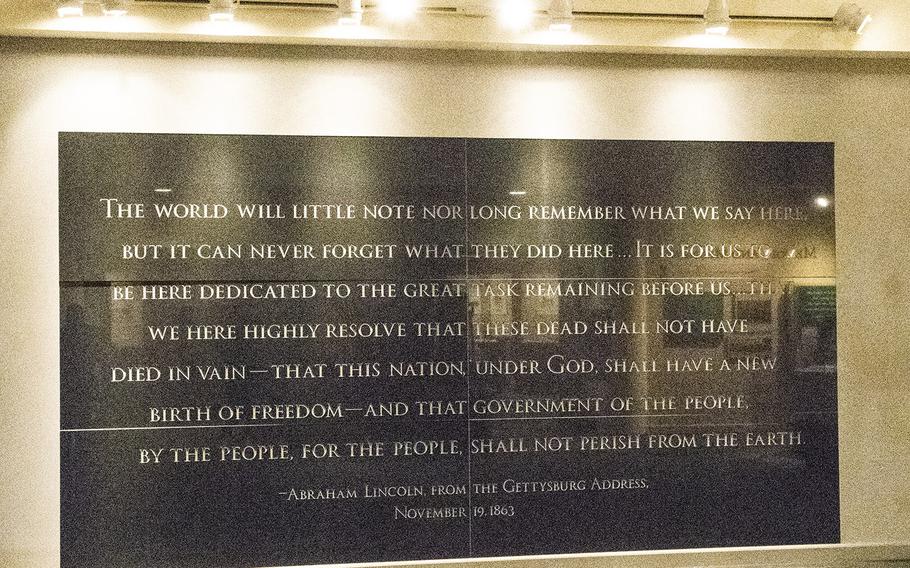 Buy Photo
A wall at the National Civil War Museum in Harrisburg, Pa. memorializes a part of the Gettysburg Address that Abraham Lincoln gave on Nov. 19, 1863. (Emma Swislow/Stars and Stripes)

Buy Photo
A wall at the National Civil War Museum in Harrisburg, Pa. memorializes a part of the Gettysburg Address that Abraham Lincoln gave on Nov. 19, 1863. (Emma Swislow/Stars and Stripes) 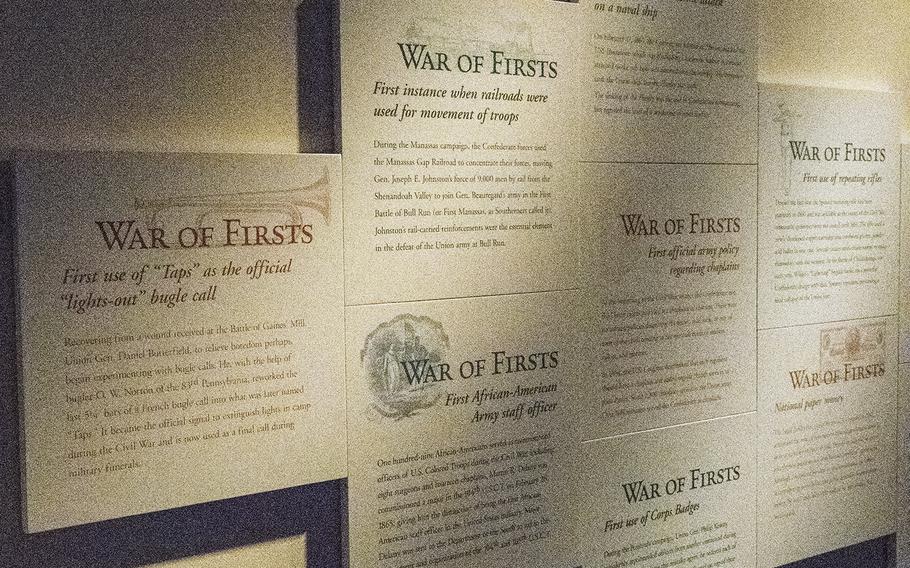 Buy Photo
One exhibit at the National Civil War Museum in Harrisburg, Pa. highlights the numerous firsts that took place during the Civil War — from the first paper money to the establishment of the Internal Revenue Service. (Emma Swislow/Stars and Stripes) 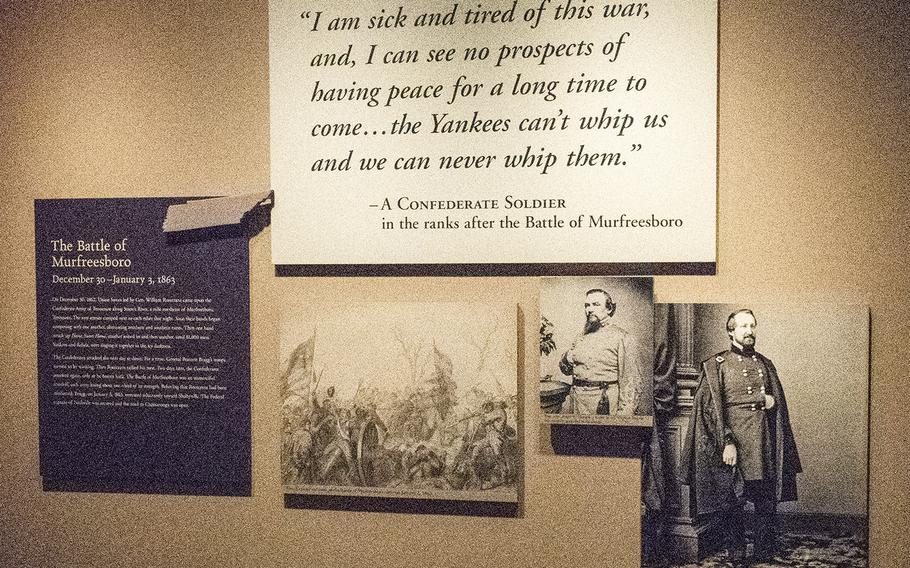 Buy Photo
This exhibit at the National Civil War Museum in Harrisburg, Pa. tells the history of the Battle of Murfreesboro through the words of a common soldier. (Emma Swislow/Stars and Stripes) 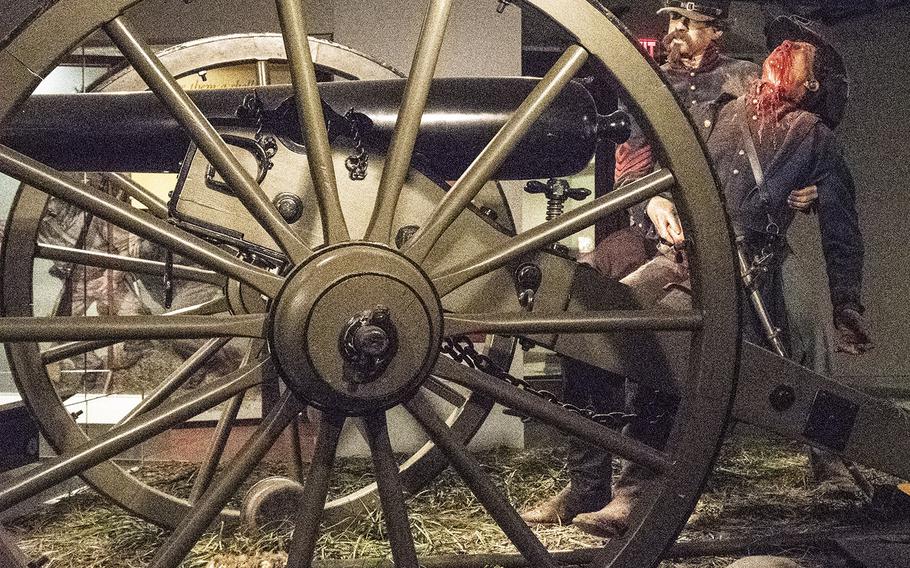 Buy Photo
A diorama at the National Civil War Museum in Harrisburg, Pa. depicts the Battle of Gettysburg, which took place about 40 miles from the museum. (Emma Swislow/Stars and Stripes) 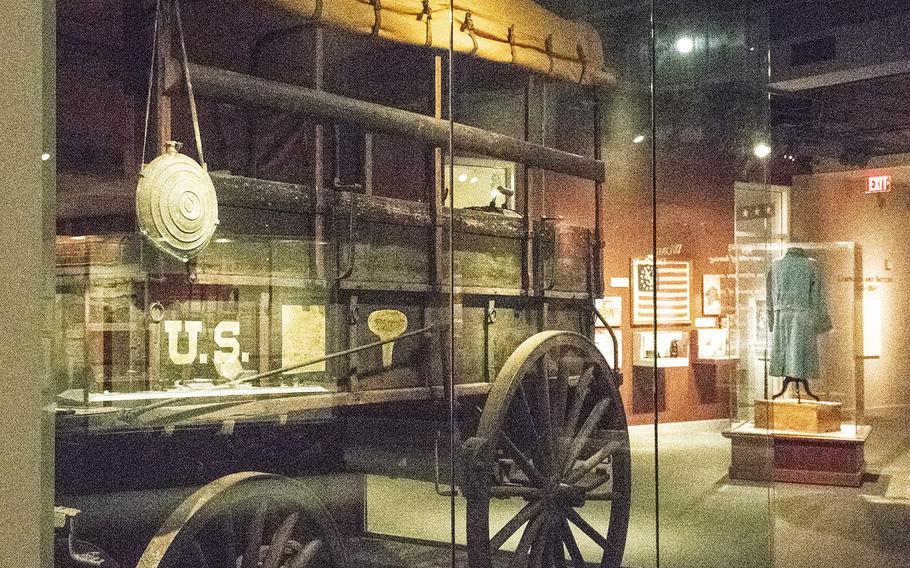 Buy Photo
A complete Civil War ambulance is on display at the National Civil War Museum in Harrisburg, Pa. (Emma Swislow/Stars and Stripes)

HARRISBURG, Pa. — Whether it’s through a glove belonging to Stonewall Jackson, a uniform worn by a Union soldier, a complete Civil War ambulance, or any of the other 24,000 artifacts, dioramas and detailed descriptions in the National Civil War Museum’s collection, visitors learn about the conflict from beginning to end.

Opened in 2001, the museum sits in a park that overlooks a city and surrounding area that, CEO Wayne Motts explains, served as an important hot spot of transportation and training during the Civil War.

“[Harrisburg] was a major railhead," Motts said. "If you manufactured a good in the northeast part of the country and you had to move it south, you had to go through Harrisburg,

“Not far from this building was the largest training camp of Union soldiers during the Civil War. This place is called Camp Curtain, and it trained and saw 300,000 Union soldiers. I don’t know of another training camp, north or south, Confederate or Union, that saw as many soldiers.”

One of the museum’s goals is to provide an account of the Civil War that presents both the Confederate and Union perspectives. In a gallery that displays uniforms and weapons, the room is literally split down the middle, with one side showing Confederate artifacts and the other Union.

Motts noted that while the term “states' rights” often comes up during discussions of what caused the Civil War, it is slavery that divided the country to the point of war.

“I don’t believe, as the CEO of the museum, that we would have had a shooting Civil War without this issue of slavery,” Motts said. “The National Civil War Museum is really one of the first places in the country that puts that right up front as the interpretation of it.”

The main way the museum communicates with its visitors about the history of the Civil War, Motts said, is through storytelling. Part of this means telling the stories of both the famous figures of the Civil War and the common soldier.

One such story is that of Ephraim Slaughter, an African American man who escaped slavery and joined the Union army. After the war he settled in Harrisburg, where he lived until he died in 1943 as the last surviving Civil War veteran in the area. A life-size replica of him stands in one of the galleries at the museum.

“What I like most about this museum are the stories,” Motts said. “You can look at a gun and say, ‘You know what, that's a gun, that's a rifle. Okay, I get it.’ Or you can look at a rifle and say, ‘That was used by this person, and here are the battles that he was in and what he did.’”

Motts originally became interested in the Civil War as a child. His father — who opened a military museum in 1987 outside of Columbus, Ohio — owned the diary of a Civil War soldier, and would read it to Motts.

“This soldier, unfortunately, was killed in 1863 in South Carolina, and his body was never recovered,” Motts said. “He actually had a premonition that he was going to be killed. We have the last letter he ever wrote, where he describes the funeral he wants to have, describes how he wants his sisters dressed. It's very powerful, very moving. I'm so interested in stories because I got interested in the Civil War with a story.”

One reason the Civil War is so important to Motts, who has also worked as a guide at Gettysburg National Military Park for 31 years, is the way its impact carries into today.

“There’s hardly a day in our lives that the Civil War does not have some effect on, and I think most people have no idea of that.”

He cited the 13th, 14th and 15th Amendments, otherwise known as the Reconstruction Amendments, as the most important contributions of the Civil War. The Amendments abolished slavery, established that African Americans had a right to citizenship, and gave African American men the right to vote, respectively.

Along with the larger ramifications of the Civil War are smaller contributions that are often forgotten, Motts said.

“The money you have in your pocket comes from the Civil War,” Motts said. “And guess what? They couldn't pay for the Civil War, so both the North and the South instituted an income tax. Then they created a department of the government called the Internal Revenue Service to collect said income tax.”

But despite the impact of the Civil War on today’s life, Motts said that education on American history is lacking. According to the National Assessment of Educational Progress, only 12% of high school seniors are proficient in U.S. history. Motts calls this a “crisis.”

“These high school seniors will probably be voting in the fall because they're going to be 18 years old,” Motts said. “In many cases, the only experience that students will have outside of the classroom related to the Civil War, may be the National Civil War Museum.”