Halt on military moves to last through June 30 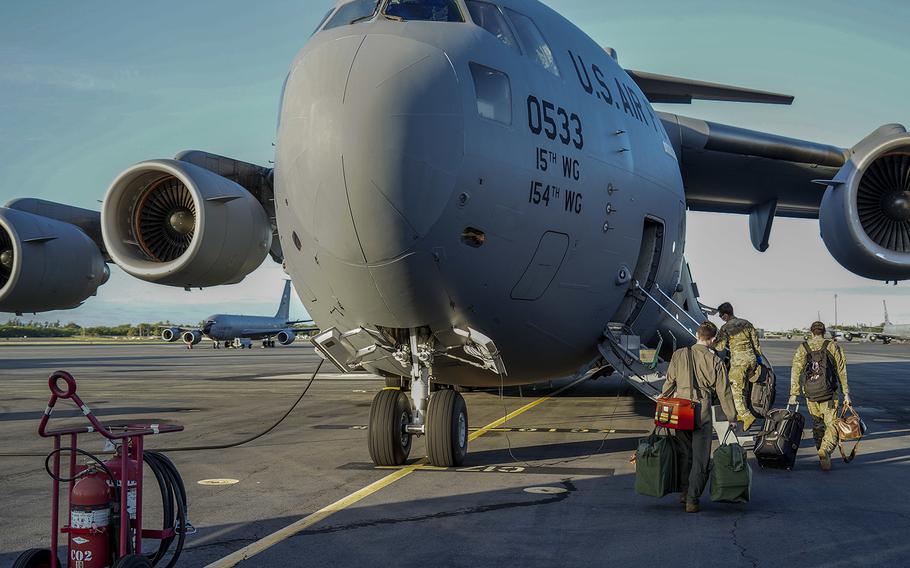 U.S. Air Force 535th Airlift Squadron pilots board a C-17 Globemaster III before taking off to Guam at Joint Base Pearl Harbor-Hickam, Hawaii, April 13, 2020. Defense Department officials announced on Saturday, April 17, that a new directive on the movement of military personnel and their families will bar travel through June 30. (Erin Baxter/U.S. Air Force)

A new directive on the movement of military personnel and their families will bar travel through June 30, but create more flexibility to allow for the deployment of troops serving overseas and some priority troops to change duty stations, a Pentagon official said Saturday.

Defense Secretary Mark Esper has yet to issue the order, which aims to curb the spread of the coronavirus by keeping service members and their families in place, according to Matthew Donovan, undersecretary of defense for personnel and readiness. However, Esper is expected to sign it into effect Monday, Donovan said.

The new order will replace the travel restrictions put into place in March that have stopped thousands of military moves and forced some deployed units to remain overseas longer than anticipated.

The new order applies to service members, civilians and their families and comes as the military prepares for summer, its peak moving season. Without revealing many details, Donovan said the new directive is “more liberal” and allows more exemptions and waivers.

“You’ll see that it’s a little bit looser, because we know more about [the coronavirus] and can get projections on potential hotspots and more information on nations where [troops] are moving to,” he said.

Each move will be reviewed on a case-by-case basis, looking at the departure and arrival locations carefully and determining whether local governments for those areas allow for such movement, including the ability to hire movers. Waivers for travel will only be granted for missions deemed essential, humanitarian relief or personal hardship. Personal leave will only be granted for the local area where service members are located now.

The services are now preparing for the new order by identifying personnel moves that are the highest priority, Donovan said.

In an average year, U.S. Transportation Command supports about 400,000 moves, with about a quarter of those moves occurring during the summer months, Donovan said. In light of March’s halt on moves, military personnel are only moving at about 30% of the normal rate. Each service is only seeing about 10% of normal movement.

For those troops and civilian personnel who are granted the ability to move under Monday’s pending order, they could have to isolate themselves once they arrive at their new location. That will depend on where they left and what the local authorities in that state or host country require, Donovan said.

Information released Friday by the Pentagon showed confirmed cases of the coronavirus has climbed to nearly 5,000 Defense Department personnel, with nearly 3,000 positive cases among service members and two deaths.

There are more than 830 cases among Defense Department civilians, another 351 among contractors and military dependents have reported about 675 cases.