Half of DOD’s coronavirus vaccines have been administered to personnel 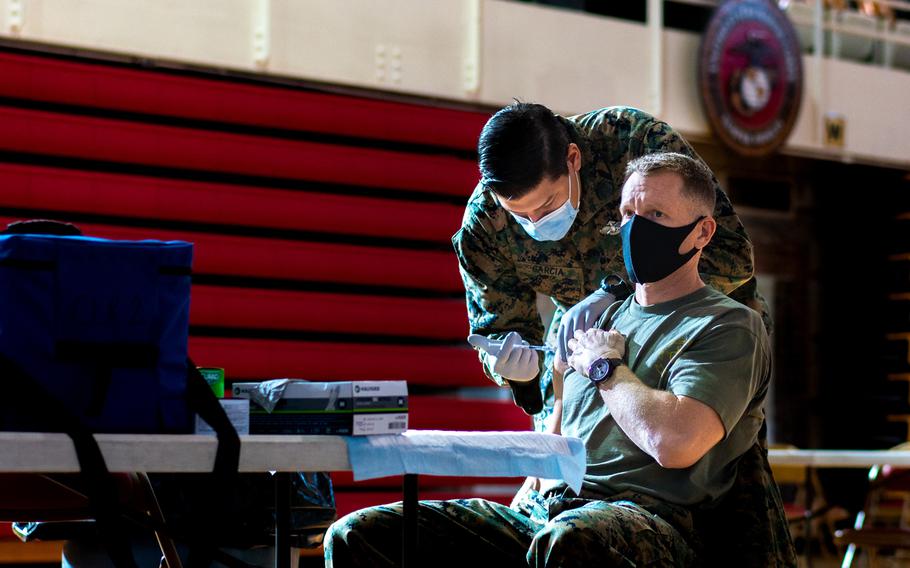 WASHINGTON — The Defense Department has received more than 794,000 doses of the Pfizer coronavirus vaccine but only about half of them have been administered, defense officials said Thursday.

Since the Defense Department began receiving doses in December, more than 389,000 doses have been given to personnel, according to the national Centers for Disease Control and Prevention website. The doses have been provided to 306 department sites, Air Force Brig. Gen. Paul Friedrichs, the Joint Staff surgeon, said Thursday during a news conference at the Pentagon.

Though Friedrichs did not say why half of the department's allocated doses remain unused, he acknowledged the vaccines received during the last two weeks have been administered.

“And that's an example of the great work done by many people across our bases and in our communities to make sure that we're as efficient as possible with this,” he said.

Almost everyone who requested a vaccine and qualified for one during the Defense Department's first phase of vaccinations, including frontline works and police, has received a dose, Friedrichs said.

According to the CDC, which Friedrichs said has a slight lag with it tallies, 335,627 Defense Department personnel have received at least one dose and 46,561 have received two doses.

The department is also seeing older people are more willing than younger personnel to get the voluntary vaccine, which is similar to reports across the United States, according to Friedrichs.

As of Thursday, there has been 138,763 coronavirus cases among military personnel.

The Pentagon also announced Thursday that the Federal Emergency Management Agency had requested assistance from the Defense Department to help administer coronavirus vaccines at locations across the country. The Pentagon said it is evaluating the request but provided no additional details.

The support will likely involve all the military services, said John Kirby, the chief Pentagon spokesman. He added he believes the request will be assigned to personnel and other capabilities within days, not weeks, due to the pandemic being a national priority.

There are more than 20,000 National Guard members deployed throughout the United States providing support to pandemic efforts, including at 216 vaccine sites in 36 states, according to Max Rose, the coronavirus senior adviser to the defense secretary. The department also has more than 1,000 medical personnel who are prepared to deploy to support states and local hospitals.