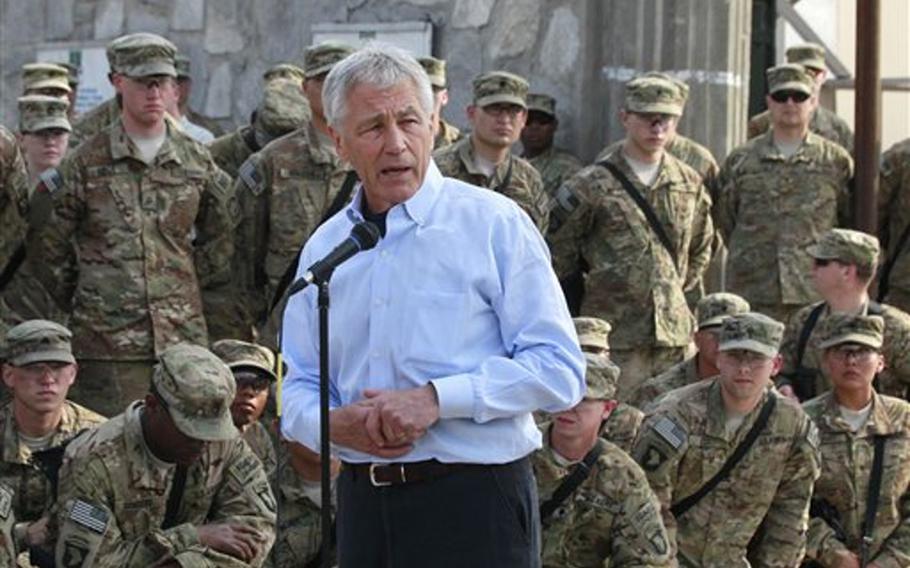 Defense Secretary Chuck Hagel speaks to members of the U.S. Army 101st Airborne Division at Jalalabad Airfield in eastern Afghanistan, in March 2013. Legal experts say Hagel and other senior officials can talk about sexual assault, but they should avoid references to specific punishments and outcomes. (Jason Reed, Press pool photo/AP)

Defense Secretary Chuck Hagel is pressing military juries and others involved in military criminal proceedings to exercise their own judgment based on facts, a message that comes as claims of unlawful command influence by senior officials are being made in some sexual assault trials.

Comments by President Barack Obama, Joint Chiefs Chairman Gen. Martin Dempsey, Marine Commandant Gen. James Amos and others have been cited for the appearance of improperly influencing military jurors and command authorities, who some argue may interpret “get-tough” comments on sexual assault as directives.

“Central to military justice is the trust that those involved in the process base their decisions on their independent judgment,” Hagel wrote in an Aug. 6 memo slated for wide distribution. That judgment “must be based purely on the facts of each individual case, not ... an effort to produce what is thought to be the outcome desired by senior officials, military or civilian.”

“There are no expected or required dispositions, outcomes, or sentences in any military justice case,” Hagel wrote.

In at least two recent cases, Obama’s comments to reporters in May could possibly affect the type of punishment that servicemembers, if found guilty, may receive.

Obama’s call for dishonorable discharges — one of multiple options a jury considers during sentencing — triggered a Navy military judge, Cmdr. Marcus Fulton, to rule in June that two defendants facing sexual assault charges could not receive punitive discharges, if convicted.

Fulton reasoned that Obama’s comments tainted the public’s belief that military jurors could independently sentence the defendants. Fulton’s ruling has been appealed.

In another case, military judge Cmdr. John Maksym found that comments by Obama and Dempsey constituted apparent unlawful influence, but he instead gave the defense extra juror challenges.

Even in sexual assault cases where sentences haven’t been altered because of apparent unlawful command influence, the issue is still complicating trials.

Attorneys compelled to provide their clients with the best possible defense should be bringing up command influence arguments, military law analysts told Stars and Stripes.

However, vetting each juror with questions about whether they’ve been influenced by senior leader statements is lengthening courts-martial and costing taxpayers, said Michael Waddington, a former military attorney who now takes military defense cases as a civilian.

Expert witnesses on subjects like DNA and psychology often cost thousands of dollars per day, even if they’re just flown to the courtroom to wait, Waddington said.

In some recent cases, the court hasn’t been able to find enough prospective jurors to convene a trial, meaning the whole process must begin anew.

Meanwhile, the experts retain their compensation and the government still pays transportation costs for anyone it needed to bring in for the case.

Attorneys and legal experts say that Obama and other senior officials can still talk about sexual assault, but they should avoid references to specific punishments and outcomes.

“Drug abuse, sexual assault, hazing and other criminal misconduct are not acceptable; senior leaders have made that clear and will continue to do so,” Hagel wrote. “But those comments are not made with the intent to indicate in any way what should or should not occur in any case. …

“The integrity of the military justice system is too important to risk any misunderstanding of what the President and I expect from those involved in it,” Hagel wrote.