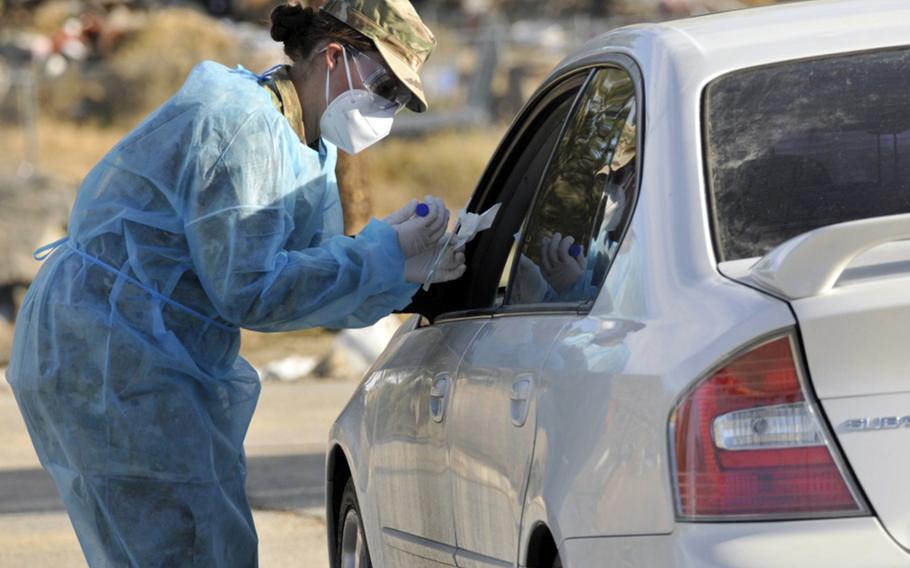 A Nevada Guard Airman supports the Reno-Sparks Indian-Colony in Hungry Valley, Nevada, on Nov. 12. Since the beginning of the Nevada National Guard’s coronavirus health response support in April, task forces have provided assistance at 10 tribal locations across Nevada with food distribution support and medical and logistical support for virus testing. (Emerson Marcus/DOD)

WASHINGTON — National Guard troops in at least 26 states are assisting with distributing the coronavirus vaccine as part of a massive national inoculation effort to curtail the disease that has killed more than 300,000 in the United States.

As of Tuesday morning, more than 56,200 soldiers and airmen are deployed across the country, many of them still helping with other coronavirus-related missions such as food distribution, according to Wayne Hall, a National Guard spokesman. It was unclear Tuesday whether more troops will be needed to distribute the vaccine as more doses become available.

States that have activated Guard members to aid in the massive distribution efforts across their jurisdictions will use those troops in different ways, National Guard officials said.

Troops in Ohio, West Virginia and Oklahoma on Monday began aiding the efforts led by public health officials, senior National Guard leaders from those states told reporters. Each of those states is handling the process somewhat differently.

None of the activated troops involved in the effort in those states has been charged with administering the vaccine to patients or ensuring the physical security of shipments, the officials said.

In Ohio, where some 900 National Guard troops are on duty assisting in efforts related to the pandemic, only about 30 are involved in vaccine distribution, said Army Maj. Gen. John Harris, the Ohio National Guard’s adjutant general.

Those troops are working in an Ohio Health Department-run warehouse, where they are charged with breaking down massive packages of 975 of the Pfizer-produced vaccines into smaller batches to be distributed. Those troops are mostly logistical specialists, Harris said, noting they had spent recent weeks rehearsing with civilian health officials to ensure they were fully prepared when the vaccines finally arrived.

“It's a very scripted and very disciplined process for getting [the vaccine] out of those ultra-low temperature coolers,” Harris said. “Getting it repackaged and back into containers you've got about two minutes. … So, it is not exactly super specialized, but it does take a specific set of skills and it takes a routine.”

West Virginia, which has about 500 troops on duty for virus-related response, has charged about 100 of its medical professionals— mostly nurse practitioners and physician assistants — with aiding the distribution efforts. Those troops, like in Ohio, are largely working to break larges shipments into smaller packages at five distribution hubs across the state, said Army Brig. Gen. Gene Holt, the West Virginia National Guard’s No. 2 general. But West Virginia troops, in some cases, will also transport vaccine to local health departments when state health officials request it, Holt said.

In Oklahoma, where about 65 troops are activated for coronavirus-related response, only about 15 are involved in the vaccine distribution effort, said Army Brig. Gen. Cynthia Tinkham, the state’s No. 2 National Guard officer.

Those troops are largely charged with moving vaccine shipments from five pre-positioned locations to satellite distribution centers throughout the state, she said.

Tinkham said she anticipated more Guard troops would be activated soon to help in the distribution effort in Oklahoma. Holt and Harris, too, expected more West Virginia and Ohio troops to become involved in efforts as more shipments of vaccine come to their states in the coming weeks and months.

“We are a surge force for our state,” Harris said. “We bring a wide variety, not only the capacity to augment the size of the workforce, but also specialized skills within that workforce. So, when you have a special response requirement like this — this is exactly what the Guard does.”

The vaccine mission follows a series of domestic operations that the Guard has had to respond to in what is the service’s busiest year outside of combat. In addition to missions related to the coronavirus pandemic, the Guard has also been called to respond to protests, wildfires, cybersecurity for the presidential election, and protecting the U.S.-Mexico border. Roughly 16,400 Guard troops are also deployed overseas, according to Hall. In early June, troops numbers peaked at about 75,000 soldiers and airmen on domestic missions.

It was unclear how much longer the Guard's pandemic missions will last. President Donald Trump cut funding, forcing most states to pick up 25% of the cost of having soldiers and airmen run testing sites, conduct contact tracing, and other work related to the pandemic. President-elect Joe Biden in November pledged to fully fund the Guard's relief missions once he's sworn in on Jan. 20. The Trump administration's current authorization for the Guard's relief work expires at the end of March.