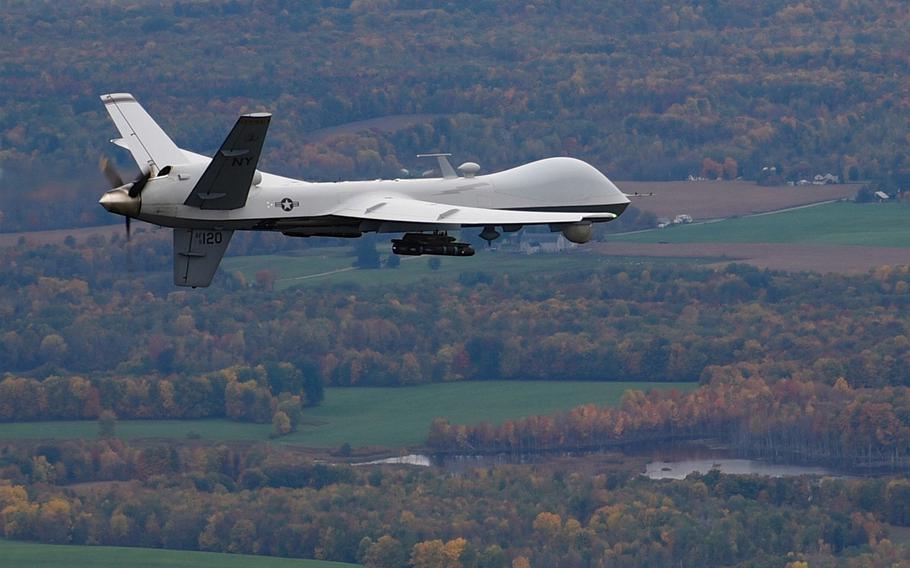 An MQ-9 Reaper drone operated by the New York Air National Guard’s 174th Attack Wing flies a training mission over central New York in 2016. Confusion over control levers led to the crash and loss of one of the unit's $6 million drones in June 2020, a recently released investigation report has found. (Eric Miller/Air National Guard)

A Reaper drone crashed at the end of a New York runway last year because the operators mixed up the levers on the control panel, an Air Force investigation report released last week said.

The unmanned MQ-9A Reaper quickly lost power and hit the ground about a minute after its takeoff from Hancock International Airport in Syracuse, N.Y., resulting in a loss of over $6 million in government property, the Air Force accident investigation board headed by Lt. Col. Brian E. Prichard said.

The unit also launches and recovers drones that can be controlled from any other Reaper unit.

The incident happened on a clear Thursday afternoon June 25, 2020, after a crew launched the drone with plans to swap control to another crew once it reached military airspace at over 18,000 feet.

But the Reaper lost all engine power in 44 seconds, at about 150 feet, and was “significantly damaged” when it struck the end of the runway 21 seconds later, crashing into runway lights and spinning 180 degrees before stopping.

The two levers are an inch apart but have “very different functions,” the report said.

The flap lever controls the orientation of the wing flaps, which are usually set at 15 degrees for takeoff, then retracted to 0 degrees by moving the lever to the middle or neutral position.

The pilot continued to misidentify the levers after the engine lost power, mistakenly pulling the wing flaps all the way back, which pushed the aircraft down instead of letting it glide.

The pilot and the sensor operator were qualified, had logged hundreds of hours of flight time, including several recent sorties, and had the required amount of rest. But the board found that the pilot became fixated on the heads-up display during takeoff, which led to the lever mix-up.

The design of the ground control station console contributed to the crash, including the lack of a safety guard on the condition lever, the report said.

Despite being right next to each other, both have black handles and are unmarked or differentiated by color, the report said.

“These levers could easily be mistaken by an inexperienced, fatigued, or confused crewmember,” Prichard wrote.