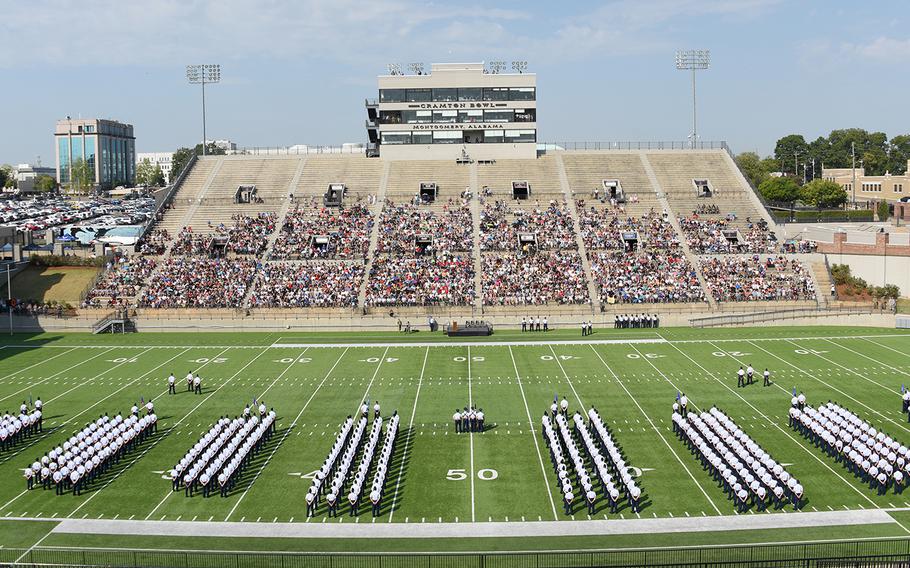 The largest class in the history of the Air Force Officer Training School — 745 newly commissioned officers — recently pinned on their rank insignia at graduation ceremonies in Montgomery, Ala.

Class No. 19-07 — a group so large that course instructors and leaders referred to it as the “Godzilla class” — started with 800 students, twice the usual number, which required the school to run two training squadrons concurrently. The usual attrition trimmed the class to 745.

Of those who graduated on Friday, 116 attended a shortened five-week course for specialized career fields for qualified, degree-holding candidates like doctors, lawyers and chaplains.

Col. Peter Bailey, the school commandant, said the class size was increased to meet Air Force demands for new officers. OTS is an initial training program for commissioned officers drawn from the enlisted ranks or the civilian world. It’s held at Air University at Maxwell Air Force Base.

“Because of shortfalls in the number of commissioned officers from [the Air Force Reserve Officer Training Corps] and the Air Force Academy this year, we worked the Air Force manpower directorate and Air Force Recruiting Service to make this happen,” Bailey told Stars and Stripes in an email Friday.

The school made few changes in its day-to-day class routine despite the large number of students, said Capt. Kaitlin Daddona, an instructor and the assistant director of operations for training, in a telephone interview Friday before graduation.

The biggest challenge was sharing resources and locations, she said. The instructors also had only one week to prepare for this class instead of the usual two.

“We did all the prep in half the time. It was hard work organizing schedules, planning shared spaces, even making sure that this many students at [physical training] have a place to go,” Daddona said. “That is just a testament to what we do. The hard work the leadership does, that the instructors do to produce really awesome second lieutenants.”

Most of Friday’s graduates were prior enlisted; the remainder had no military experience, according to a statement from the school’s public affairs office.

Second Lt. DeJaye Herrera, who previously served 12 years as an enlisted airman, is headed to Travis Air Force Base, Calif., as an aircraft maintenance officer. She said the larger class came with a more diverse student body, which contributed to the learning environment.

“There were so many people from different backgrounds and different walks of life,” she said. “So much more than a smaller class would bring.”

Herrera, in a telephone interview Friday, said the hardest part of training was being away from her daughter, but a highlight was the traditional “dining in” to celebrate graduation.

Dining in is a formal dinner that only military personnel may attend. Participants wear formal dress uniforms and typically make formal after-dinner toasts.

The event brought together the instructors, the school leadership and all the graduating students, Daddona said.

“It gave me chills,” she said.

Students from each squadron joined together to sing the national anthem and shared stories about how each squadron’s leaders have different styles and ideas, Daddona said.

Air Force OTS graduates approximately 3,300 officer per year across eight classes. The school accounts for about 54% of new Air Force officers annually and is the fastest route to a commission in the service.

OTS churns out a new crop of second lieutenants every two months, about the same amount of time enlisted recruits spend at basic training.

Of this class, 287 new officers are headed to aviation-related career fields. Another 287 are headed for jobs in engineering, operations research, intelligence, logistics, maintenance, cyber and space. The remaining 171 graduates are entering professions in the law, medicine or the chaplain corps.