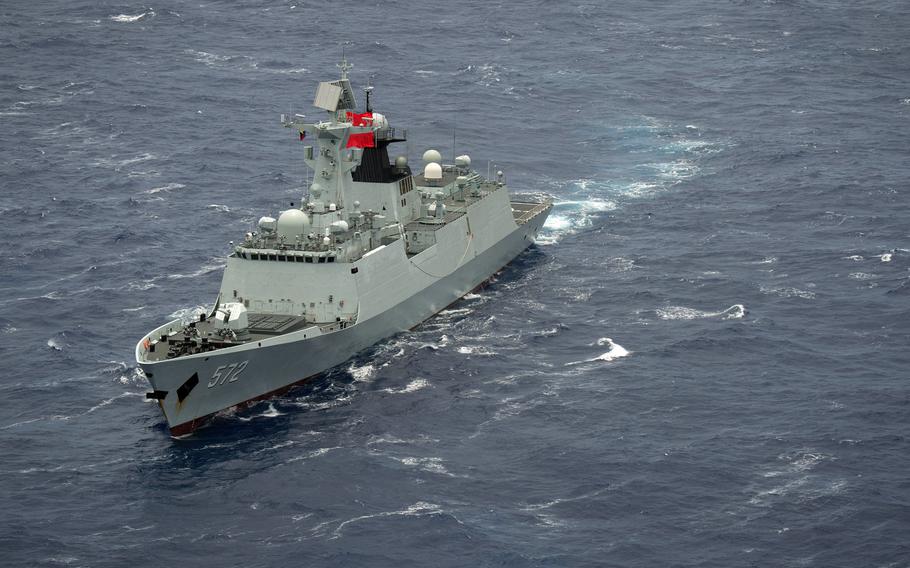 The Chinese multi-role frigate Hengshui steams in close formation with ships representing 13 nations during the Rim of the Pacific exercise in July 2016. China spent the second most on defense worldwide in 2020, after the U.S., according to an International Institute for Strategic Studies report released Feb. 25, 2021. (Ace Rheaume/U.S. Navy)

The Chinese multi-role frigate Hengshui steams in close formation with ships representing 13 nations during the Rim of the Pacific exercise in July 2016. China spent the second most on defense worldwide in 2020, after the U.S., according to an International Institute for Strategic Studies report released Feb. 25, 2021. (Ace Rheaume/U.S. Navy) 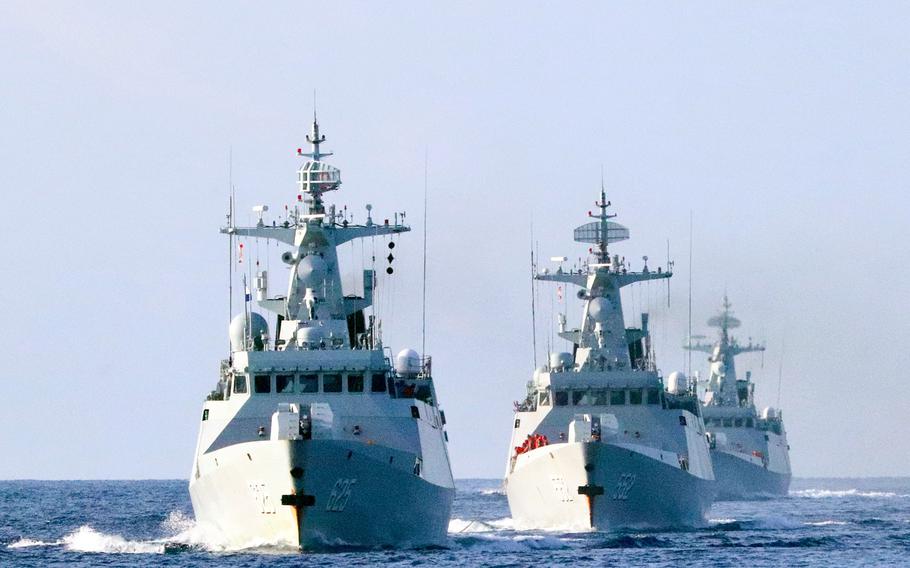 Three Chinese warships steam in formation during a training exercise in the South China Sea on Jan. 4, 2021. China spent the second most on defense worldwide, after the U.S., according to an International Institute for Strategic Studies report released Feb. 25, 2021. (Zhang Bin/Chinese defense ministry) 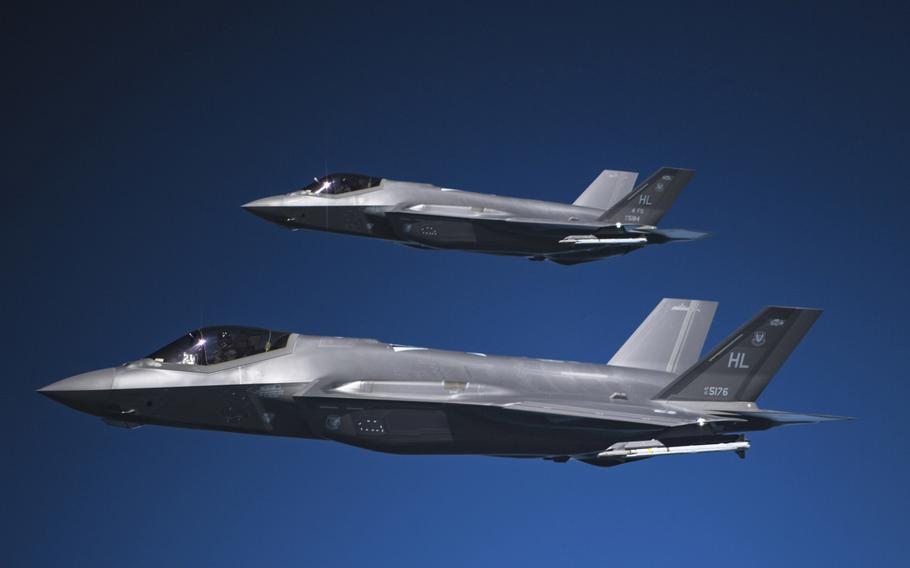 Two F-35A Lightning IIs fly in formation after receiving fuel from a KC-135R Stratotanker in May 2019 over an undisclosed location. The U.S. remained the top spender on defense in 2020, accounting or 40.3 % of global spending, the International Institute for Strategic Studies said Feb. 25, 2021. (U.S. Air Forces Central Command )

The U.S. and China led the growth in global defense spending, which hit a new high in 2020 despite the economic stress brought on by the coronavirus pandemic, a report said Thursday.

In its annual report on military power, the International Institute for Strategic Studies said total military expenditures added up to $1.83 trillion in 2020, a 3.9% increase over the previous year. “This came despite the coronavirus pandemic and the subsequent contraction in global economic output,” the London-based think tank said in a statement.

The United States remained the top spender, accounting for 40.3% of global spending. But China and other Asian powers concerned about Beijing’s rise also spent more, albeit at a somewhat slower pace than in 2019 because of the pandemic, IISS said in its “Military Balance” report.

China’s maritime paramilitary forces are using facilities in the South China Sea as forward operating bases, the report noted. China has also built artificial islands in the sea over the last decade and constructed bases on natural features claimed by other nations in the region.

Meanwhile, China’s navy has maintained an “over-the-horizon” presence focused on extending its reach.

China’s corvette numbers have more than doubled in the last five years, reaching 55 in 2020, IISS said. Beijing is also boosting its anti-submarine warfare capabilities while expanding its fleets of transport ships and heavy transport aircraft.

After the U.S. and China, the top spenders were India, Britain and Russia.

Defense spending among Europe’s NATO members has increased by nearly 20% since 2014, which is when allies began boosting expenditures after years of budget declines. The increases came after Russia’s intervention in Ukraine, which sparked new security concerns in Europe. European defense spending grew 2% last year, compared to a 4.1% boost in 2019.

IISS said it appears NATO allies remain committed to increasing their defense budgets in 2021 and beyond, signaling an “intention to avoid the cuts that followed the 2007−08 financial crisis.”

“If these spending plans continue on their current trajectory, in 2021 Europe could be the region with the fastest growth in global defense spending,” IISS reported.